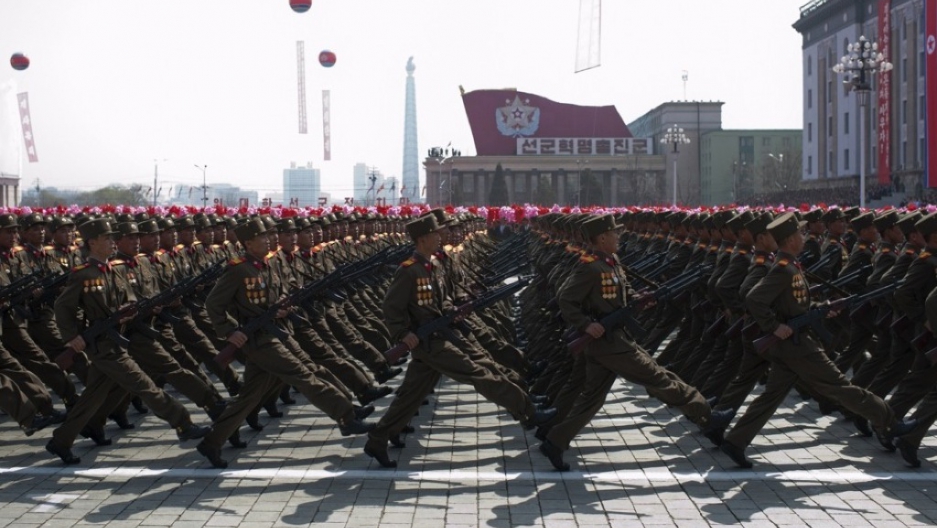 After the authorities accused Jung Gwang Il of espionage, they locked him in a tiny underground cell at the Yodok concentration camp in central North Korea. It’s officially known as "kwanliso," or "penal labor camp," No. 15.

Hoping for a confession, the interrogators cuffed the prisoner’s hands to an iron bar behind his back and suspended him by a rope from the ceiling.

Unable to move and in immense pain, he signed the confession after 10 months of torture. He was imprisoned for three years from 2000 to 2003 and then escaped to Seoul.

Refugees in South Korea say this is merely one method of torment. Others claim they have been submerged in water with plastic bag on their heads or beaten, while a few report forced abortions on women raped by the guards, say human rights groups.

The North Korean government doesn’t have much to say about those allegations. It denies the existence of Yodok and the four other political labor camps believed to be operating in the country, which it calls “Total Control Zones.”

So Jung, 51, was delighted when, last week, the United Nations agreed to open its first investigation into possible crimes against humanity in North Korea.

The Commission of Inquiry (COI), which will carry out research for one year, could reveal more about the torture, executions and forced labor reported by survivors. The three-member panel is starting work three months after Navi Pillay, the UN special rapporteur on human rights, first raised the call after she interviewed two former inmates.

North Korea runs a network of five, and possibly six kwanliso — secret punitive labor colonies that are overshadowed by the nuclear threats and rocket launches that make global headlines.

The US Committee for Human Rights in North Korea (NHRK), a Washington, DC-based nonprofit, believes 150,000 to 200,000 people — just under 1 percent of its population — toil in the colonies.

Multiple human rights reports have corroborated that estimate, offering a range of 135,000 to 200,000 prisoners.

All that information comes with a caveat. “It's difficult to know exact population sizes or have fully up-to-date information on the camps,” said Sokeel Park, the Seoul-based director of research and strategy at Liberty in North Korea, a nonprofit, “because it can take time for those with direct experience to escape and provide their testimony.”

Human rights groups claim the regime imprisons political enemies without due process, along with three immediate generations within their families. They slog through hard labor every day, churning out soybean paste, coal and lumber, to name a few.

More from GlobalPost: Is North Korea all talk and no action?

One February report from NHRK, drawing on satellite imagery of Camp 25 near the northeastern coast, said that the grounds expanded from 2009 to 2010.

The change is partly due to the security regime’s desire to stem the flow of defectors outside the country, along with a political reshuffling around the time Kim Jong Il was preparing to pass power to his son, according to the report. “We are absolutely certain about the allegations,” said Greg Scarlatoiu, head of NHRK.

Camp 14, known as the Kaechon colony in the west, also appears to be expanding its borders, Amnesty International announced in early March. Images taken between 2006 and last February showed up to 20 possible guard towers near areas with expanding mining operations.

When they reach the camps, the convicts are herded either into “revolutionary processing zones” for re-education that will allow them to return to society. For more serious political crimes, the regime sends dissidents and their families to areas called “total control zones,” labeling them beyond redemption and not eligible for re-education.

Other times, the government exiles entire families to the remote mountains, where they must subsist off of nature.

The practice carries symbolic meaning in North Korean society: it is a revival of the chastising of delinquents during the Joseon dynasty, the monarchy that ruled the Korean peninsula from the 14th to late 19th century.

Nevertheless, few analysts think the UN investigation itself will lead to immediate changes.

“The North Korean regime has proven itself to be incredibly impervious to external pressure, so no one expects them to cave in because of the establishment of a UN Commission of Inquiry,” Park, the research director, said.

But he added that the investigation will initiate a “better resource and more authoritative investigation.” It’s the sort of international scrutiny that gives Jung, the defector, some hope.