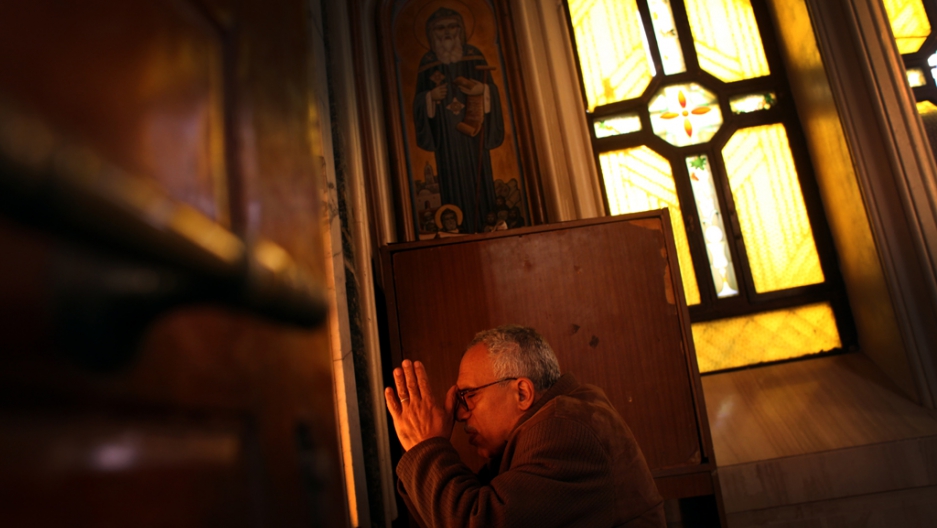 A man prays inside Cairo's Church of the Virgin Mary in the neighborhood of Shubra on Sunday Feb. 3, 2013.
Credit: Laura El-Tantawy/VII mentor program
Share

This is the first in a series of posts about dwindling Christian communities in the Middle East.

On the ancient cobblestones of Jerusalem’s Old City today Christians retraced what tradition holds as the path of Jesus in his final hours of life.

Marking what is referred to in the Roman Catholic religious calendar as ‘Good Friday,’ there are annual reenactments, in which an actor playing the role of Jesus wears a torn robe and a crown of thorns. He stumbles under the weight of a heavy wooden cross while other actors, dressed as Roman soldiers, beat and torment him along the way.

This somber walk along the “stations of the cross” and the joyous Easter celebrations — with waving palm branches and white flowers, — that will follow on Sunday are all a tactile expression of Christianity’s origins. Christianity was born in the Palestinian-controlled West Bank town of Bethlehem and grew out of the fires of the ancient Middle East. It was only later, through the rise of the Holy Roman Empire, that Christendom became a Western religion and an expression of power as well as an expression of faith.

But today the indigenous Christians of the Middle East who see themselves as part of a 2,000-year continuum of the religion’s history are steadily disappearing in the land where the faith began. These Christian minority communities are dwindling in every corner of the modern Middle East, and GlobalPost’s BELIEF blog begins today a series of posts from around the Middle East that will explore this historic emigration and why it matters to the future of the region.

Pews are emptying in churches of the West Bank town of Bethlehem, where the Bible proclaims that Jesus was born; in Egypt, where the Holy Family fled the wrath of King Herod; in the northern Israel town of Nazareth, where it is believed he came of age as a young boy; in Jordan where Jesus was baptized on the banks of the Jordan River; in Lebanon, where he preached the gospel in the Phoenician town of Tyre; and in Jerusalem, where Christians believe God called upon Jesus to sacrifice his own life so that the sins of humanity could be forgiven.

The Christian belief in Jesus’ resurrection, which the Bible says followed on the third day after his death, is what is celebrated on Easter Sunday by all of the denominations and expressions of Christianity all over the world. (The Eastern Orthodox, who follow a different religious calendar, mark the day two weeks from this Sunday.)

This Easter, two years after the tumultuous events of the so-called ‘Arab Spring’ toppled corrupt and brutal regimes in Egypt, Libya and Tunisia, unleashed war in Syria, and left other governments teetering with insecurity, is a particularly poignant and uncertain time for the indigenous Christians. The forces coming to power in the political vacuum left by these toppled regimes is giving rise to a regional form of political Islam that Christians fear is not boding well for the future of religious minorities like themselves.

As a result, many of the Middle East’s indigenous Christians are emigrating to the West. They are flowing into immigrant pipelines to the Americas and Europe that have been established through the last two centuries, but which demographic experts and church historians say are flowing more steadily now than ever.

A Personal Journey Through This Story

This Christian exodus is a story I have documented for 15 years in the Middle East. My research on the topic began as a series of articles for The Boston Globe in 1998 when I was the Middle East Bureau Chief based in Jerusalem. I continued my research by retracing the path of Jesus’ life in the modern Middle East and wrote a book titled The Body and The Blood: The Middle East’s Vanishing Christians and the Possibility for Peace (PublicAffairs, 2001.)

Along the path from Bethlehem into Egypt and then Nazareth, Jordan, Lebanon, and Jerusalem, I interviewed scores of local Christians and clerics and poured through demographic data and parish records to record a steady diminishing presence of the Christian faith among Catholic, Protestant, Coptic and Eastern Orthodox rites. According to the census data kept by the Ottoman Empire, the Christian population in 1914 was 24 percent of what we could call today Israel/Palestine, Egypt, Jordan, Lebanon, Syria, Iraq, and Turkey. Today it is less than 5 percent. In British-ruled Palestine, Christians comprised as much as 20 percent of the population (though some put the figure at 13 percent), while today in Israel/Palestine, that figure is estimated at no more than 1 percent.

My sources, a mix of Arab priests, academics, Western church officials and diplomats, offer numerous anecdotes and stories of whole families emigrating, which they say indicates the trend has worsened in the last two years. A long-held fear that the Christian presence in the Holy Land would effectively disappear within a generation is alarmingly on track, they report.

In the last few months, American clergy and congressmen who have been traveling in the region, as well as Secretary of State John Kerry and numerous diplomats and scholars, are hearing reports from the ground that Christian communities, particularly in Egypt, Syria and Iraq, feel threatened and under siege. They say they are caught not only in the tumult of events like all citizens – Muslim and Christian alike — but that they are acutely fearful of a future in which Islamist movements such as the Muslim Brotherhood in Egypt, the Shia-led government in Iraq and the Islamist opposition fighters advancing in Syria will impose a culture of intolerance and discrimination toward all religious minorities, including Christians.

One Congressman's Pilgrimage in the Middle East

Representative Frank Wolf (R-Va.), a veteran religious freedom advocate, just returned from a tour the Middle East warning that the US was eroding its credibility in Egypt, Iraq, Syria and elsewhere by overlooking abuses of religious minorities.

In supporting movements such as the Muslim Brotherhood in Egypt, Wolf said the US was employing a double standard that overlooked civil rights abuses, especially those targeting minority Christians.
He said no one in Egypt was painting a “rosy picture” of the future, adding, that he was “repeatedly told that the new government led by President Mohamed Morsi and the Muslim Brotherhood is ignoring women’s rights, human rights and religious rights”

In an interview with the Christian News Service (CNS), Wolf said, “I was told people think the United States is developing relationships with the Muslim Brotherhood because it believes the party is going to remain in power,” Wolf said. “[T]he feeling is that as long as the Brotherhood protects the United States’ interests in the region, it can act with impunity within its borders.”
Wolf met with Coptics and other Christians who told him about an overall atmosphere of intolerance that was fostered in television programming and ignored by most Egyptians.

“Churches have been desecrated, and no permits to build new churches have been granted since January 2011,” he said, referring to the date when the uprisings that toppled Hosni Mubarak first got underway.

“By most accounts, US policy has not evolved to meet the new realities in Egypt,” Wolf said. “We have embraced the Morsi government the same way we embraced the Mubarak government to the detriment of other elements of Egyptian civil society – elements with which we have a natural affinity.”
With Egypt receiving more than $60 billion in US foreign assistance over the last three decades, Wolf called for a reassessment in the way aid is given.

“Given the Mubarak regime’s human rights and religious freedom abuses, I have long believed this assistance should be conditioned on improvements in these areas,” he said.

Wolf also traveled to Lebanon to meet with Christian and Muslim refugees from Syria. In one particularly poignant interchange, Wolf spoke with a Christian couple who told him that only 400 Christians remain in Damascus amid the heavy fighting there. Those who stayed behind, they said, were too old to flee.

“Bashar al-Assad is a brutal dictator and war criminal,” Wolf said, but added that “the West must be clear-eyed about who the rebels are, and what they will do if they seize power.”
As the administration develops Syria policy, “it must be ever mindful of the very real concerns of Syria’s Christian community,” he said, adding that there was growing evidence that several factions of the opposition including foreign jihadists from Yemen, Saudi Arabia, Afghanistan, Iraq and elsewhere with a view of political Islam that is intolerant to religious minorities.

Calling for a Special Envoy

Wolf has called for the State Department to appoint a special envoy on religious freedom in the Middle East, but the effort has been thwarted by several prominent Democrats, including Senator Jim Webb, who feel it would be duplicative and potentially counter-productive. Arab leaders, Christian and Muslim alike, have also been suspicious of such steps to highlight the persecution of Christians, seeing them as part of a broad effort to demonize Islam and divide Christian Arabs from their Muslim neighbors. Nevertheless, Wolf urged church leaders in the West to push for an envoy position and to speak out about what is happening not just in Syria, Iraq and Egypt, but across the region.

If the Middle East “is effectively emptied of the Christian faith,” Wolf said, “this will have grave geopolitical implications and does not bode well for the prospects of pluralism and democracy in the region.”

Read parts two, three, and four of this series, about dwindling Christian communities in the Middle East.