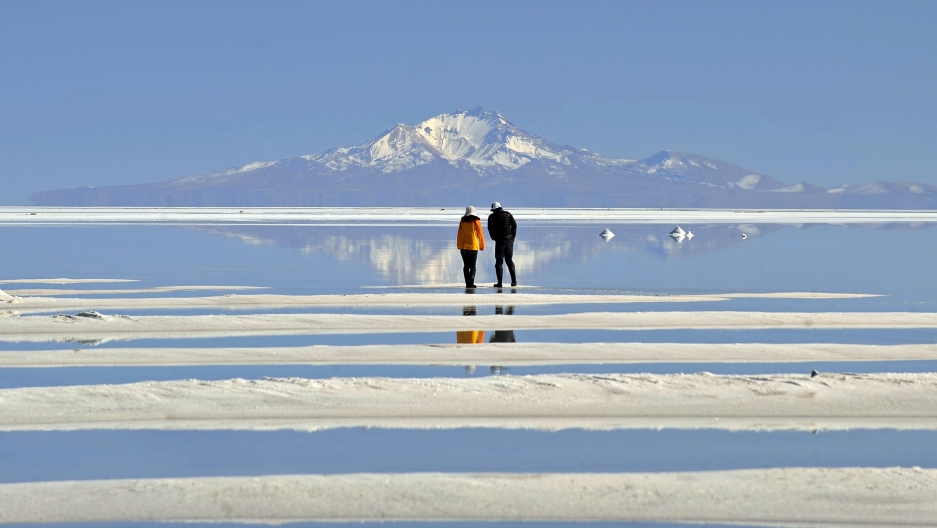 A Japanese tourist couple walks on Bolivia's Uyuni, the world's largest salt flat said to also have one of the richest deposits of lithium.
Credit: Aizar Raldes
Share

LA PAZ, Bolivia — Is Bolivia poised to become the “Saudi Arabia of lithium,” the vital ingredient in batteries for smartphones and electric cars?

The Uyuni salt flats, stretching across a remote Andean plateau in the southwest of the country, are easily the world’s largest reserve of the soft, light, whitish metal coveted by high-tech firms from Silicon Valley to Tokyo.

This year, President Evo Morales has moved swiftly ahead with plans to finally begin reaping a potential lithium windfall of billions of dollars for the impoverished South American nation.

In January, Bolivia opened its first trial plant. It will produce 40 tons of lithium carbonate a year. Over time, the government wants to ramp production up to 30,000 tons — roughly a fifth of current global demand.

However, Bolivia faces a series of technical challenges.

Uyuni’s lithium deposits are unusually salty and humid, with the entire salt flats flooded by seasonal rainfall every February and resembling an endless mirror perfectly reflecting the sky.

The lithium is mixed with magnesium, complicating the extraction process. The remote location will raise the cost of bringing in energy, water and other inputs.

Meanwhile, Morales’ socialist administration’s go-it-alone attitude — including recent nationalizations of everything from utilities to airports — may mean it will have problems accessing the foreign technology needed to process the lithium.

But with huge potential sales, Bolivia is taking the gamble.

Durable, reliable and able to take big charges, lithium batteries have long been used in a range of high-tech products such as pacemakers and laptops.

Now, the rise and rise of smartphones and the imperative of climate change — expected to finally ignite the electric car market — mean growing demand for the element could turn into a global lithium rush.

Even with lithium recyclable, the math could not be more overwhelming.

“Seventy percent,” Jose Bustillos, director of operations at Bolivia’s state mining agency COMIBOL in his La Paz office, corrects me when I mention the widely quoted statistic that Uyuni contains some 40 percent of the world’s confirmed lithium reserves.

The difference, Bustillos says, is that previous studies literally only scratched Uyuni’s surface, going down just 2 or 3 feet. New studies have drilled down as deep as 600 feet.

If Bustillos is right, Bolivia could be sitting atop anything from 20 million to 100 million tons of lithium.

“Bolivia is a country blessed with natural resources but these have been ransacked by outsiders over the years and Bolivians have been left with peanuts,” Bustillos says, as he explains the government’s approach to developing its lithium bounty.

“We want to export not just raw materials but finished products, such as batteries. But we have to be realistic. That is not going to happen quickly. And we will need to generate trust in products made in Bolivia.”

The country is in talks with China, the Netherlands, Japan and Korea, Bustillos confirms. Any deal would either take the form of a joint partnership — allowing Bolivia control over its lithium reserves — or just a straight purchase of the necessary technology.

Removing water from the lithium deposits is a relatively low-tech and cheap, albeit time-consuming process.

But according to Gail Mahood, a geological and environmental science professor at Stanford, the big technical challenge will be extracting the magnesium.

“It is close to lithium on the periodic table and behaves in a similar way,” she told GlobalPost. “It will definitely push the price up.”

Yet the biggest problem may be yet to come.

“The process will require a lot of freshwater and where are you going to get that from?” asks Mahood. “Do you take it from upstream where indigenous communities are using it for irrigation?”

Bustillos appears to have the answer — and it potentially places Morales, who plans to run for re-election in 2014, once again on a collision course with some of the poor voters who swept the president to power.

More from GlobalPost: Bolivia's Morales set for another showdown

“There are various sources of water but we can’t mention them publicly because we haven’t reached agreements with the communities yet,” he told GlobalPost.

He then adds: “If we say that we can’t develop economically as a nation because a community is opposed then we will remain in poverty.

“Bolivians have always believed that we can’t, and we need to change the national attitude. If you can do it elsewhere then why not in Bolivia?”

But not everyone is convinced the country’s move to exploit its lithium reserves makes economic sense.

“Even if the electric car market takes off, it is cheaper to expand an existing operation,” says Jonathan Lee, battery materials and technologies analyst at Byron Capital Markets.

And that is exactly what is happening at three major existing lithium operations in Quebec, western Australia and in the Puna region of Argentina. Together, those three will increase annual global lithium supplies by 54,000 tons by 2014.

Morales’ ambitions to exploit lithium may pan out in the long term. But in the next few years, Bolivians should not be holding their breath for a huge influx of badly needed lithium dollars to their under-developed Andean homeland.