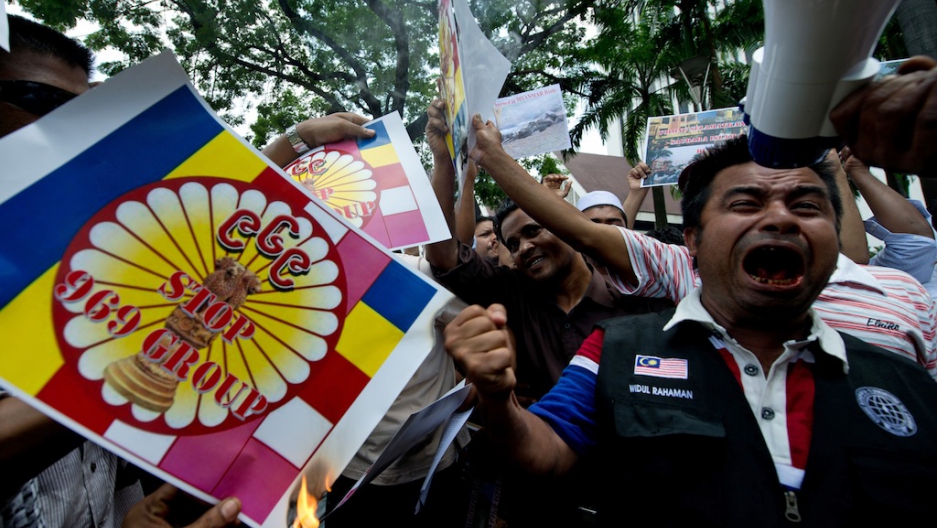 YANGON and MANDALAY, Myanmar — To untrained eyes, the symbol that has suddenly appeared on shop windows across Myanmar appears benign: a patchwork of pastel hues overlaid with the numerals 969.

But to Muslims living in overwhelmingly Buddhist Myanmar, the emblem can carry a chilling message: stay out of my store and don’t send any sneaky Buddhists in here to shop on your behalf.

In the aftermath of central Myanmar’s recent anti-Muslim riots — a killing and arson spree that left blackened corpses in the streets — authorities have vowed to track down and punish instigators.

Fears that the mob violence will spread into Yangon, the nation’s largest city, have compelled some Muslims to shutter shops by sunset and cops to double night patrols. In Mandalay Division, the heart of the unrest, the official death toll stands at 32, as many as 15,000 are displaced and whole Muslim quarters have been torched and abandoned.

This crisis is erupting in concert with the fast-spreading 969 campaign, which draws its code from a numerological arrangement of Buddhism’s core teachings. It is ostensibly a pride movement that urges Buddhists to patronize Buddhist shops. But the loudest proponents of 969, a set of nationalist monks, urge followers to avoid all shops unwilling to fix the 969 emblem to their storefronts.

“Buddhists should go with Buddhists,” he added, his eyes darting to a trio of Muslim men standing nearby and his voice lowering to an uneasy whisper. “And Muslims should go with Muslims.”

The face of the 969 campaign, a popular Mandalay monk named Wirathu, has pushed this segregation sentiment to the extreme. “If you buy from Muslim shops, your money doesn’t just stop there,” Wirathu said in a late February speech available via CDs sold in markets across Myanmar. “It will eventually go towards destroying your race and religion.”

Wirathu’s rhetoric is flush with conspiracy and paranoia. He claims that Muslim merchants receive cash injections from Middle East oil state brethren and use these funds to undercut Buddhist rivals. He claims Muslims have infiltrated the camp of Aung San Suu Kyi, the nation’s widely revered Nobel Peace Laureate and parliamentarian, along with other respected freedom icons.

“We Buddhists allow them to freely practice their faith,” Wirathu said in the same February speech. “But once these evil Muslims have control, they will not let us practice our religion. We must be careful. These Muslims really hate us.”

Anger between Buddhist and Muslims in Myanmar has burned hottest in Rakhine State, a coastal region bordering poor and heavily populated Bangladesh.

In the last year, mobs have battled with machetes and staves and Muslim refugees have been forced into muddy, disease-ridden camps. The official death toll stands at roughly 100, a lowball figure in the eyes of some Muslim organizations.

Government spokesmen have ascribed that crisis to tension stirred by the Rohingya, a largely stateless ethnic group. Though most lack citizenship, the Rohingya insist they’ve occupied coastal Myanmar for centuries. But many of Myanmar’s Buddhists regard them as invaders from Bangladesh. “There’s no such thing as Rohingya. They’re Bangladeshis,” said Ray Wa Ta, 27, a monk who studies at Wirathu’s Maesoeyein Monastery in Mandalay. “They’re brutal. They rape girls. They’re kalar.” (The word "kalar" is a highly insulting Burmese term often applied to Muslims, particularly those with dark South Asian complexions.)

The citizenship of Muslims living outside this strife-torn region, however, is unquestionable. Some groups have been here for centuries. Others descend from Muslims brought in as second-tier administrators by British colonialists, whose policy of installing non-native bureaucrats to control the local population has been blamed for instilling ethnic friction.

Although better known for its shimmering temples and barefoot monks, Myanmar is home to a sizable Muslim population, which is officially pegged at roughly 5 percent of the total citizenry. Come morning in Yangon, prayer calls ring out from minarets and, by late morning, lamb curries are dished out in Muslim-owned eateries. Wirathu credits local Muslims with inspiring 969: for decades, Muslim merchants have decorated their signage with the numbers 786, an allusion to Islamic numerology.

The recent bloodshed in Myanmar’s interior has stoked fears that violence between Buddhists and Muslims could rapidly spread across the nation.

In eastern Karen State’s capital of Hpa-an, fliers urge locals to bar Muslims from renting homes and farmlands and ominously warn Buddhists acting as Muslim families’ middlemen. Wirathu has drawn attention to hilly Mon State, where he accuses a Muslim bus operator, by name, of using Saudi cash to subsidize his fares and drive Buddhists out of business. Yangon-based Eleven Media offers more hopeful news from the same region: Buddhist and Islamic leaders in Mon State have joined forces to quash rumors that mysterious figures were training thousands of youth to create havoc with swords.

More from GlobalPost: Where Aung San Suu Kyi is a tarnished idol

“In the past, people of different races and religions peacefully coexisted,” said Min Ko Naing, a respected former political prisoner and democracy advocate, in an interview with the Myanmar-focused outlet Mizzima. “I worry that we cannot maintain this tradition and I worry that our country will no longer be peaceful.”

Facebook, a relatively recent phenomenon in long-isolated Myanmar, has become a conduit for 969 and campaigns like it. One popularly posted message seeks to defend 969 from allegations of bigotry: “Encourage 969 outlets. I’m not discriminating against race or religion. I’m not a racist. But I have the right to love my race!” Another more sinister Facebook group, since deleted, dubbed itself the “Kalar Beheading Gang.”

From obscurity, the popularity of 969-branded shops has soared in downtown Yangon within the last two months. All shopkeepers interviewed by GlobalPost — Buddhist and Muslim alike — were highly familiar with Wirathu’s rhetoric. “Everyone has seen his videos,” Win Hted said. “My neighborhood loves him.”

Despite their embrace of Buddhist solidarity, most merchants draw the line at refusing Muslim customers. “We don’t really have Muslim friends. That doesn’t mean they can’t come sit down here,” said Khin Su, the 60-year-old owner of a tea shop located on a street adjacent to a busy mosque. “But we’ve noticed in the last few days that a lot of Muslims are closing their shops and going home early. There are plainclothes police around to keep an eye on them.”

Two blocks down, a Buddhist bookseller operating a 969-affiliated shop also asserted that Muslims were welcome patrons. “969 is for helping Buddhists,” he said. As he explained, a junior clerk interrupted by muttering “Stop the kalar!” and then giggled like a child who’d uttered a dirty word.

Muslims in Yangon don’t have to be told to stay away from 969-branded shops, said Chit Law, a 31-year-old Muslim who runs an open-air tea shop. “We just avoid all 969 shops anyway,” he said. “This Wirathu is a dangerous man. His policy is no good. People are hoping the violence doesn’t come to Yangon. But we’re starting to feel very afraid.”