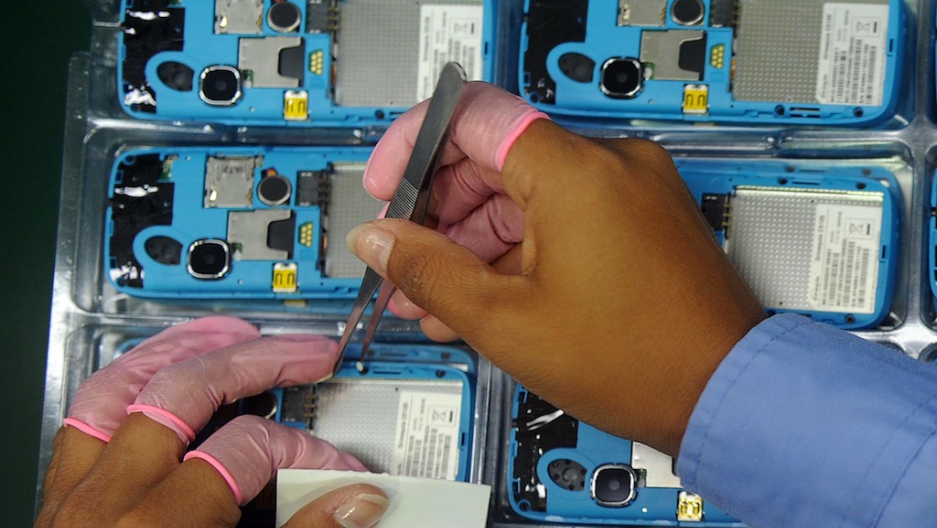 Warning: this may not be good for you.
Credit: Leo Ramirez
Share

But is it clean? Is it safe to use? And were the workers who built it free from harm?

He contends that smart phones and other digital gadgets are among the most hazardous products known to consumers.

Smith founded the Silicon Valley Toxics Coalition in 1982, after contamination from tech manufacturing in San Jose threatened groundwater. He is coordinator of the International Campaign for Responsible Technology and co-editor of "Challenging the Chip: Labor Rights and Environmental Justice in the Global Electronics Industry."

In 2001, he was honored by the Dalai Lama for his environmental leadership.

(GlobalPost edited this interview for length and clarity.)

GlobalPost: You have said that our digital gadgets are among the world’s most hazardous products. Explain, please:

Ted Smith: You have to think about the whole life cycle of the product. The amount of materials that go into building a cell phone, a computer or a tablet is really astounding. They require huge amounts of metals, so you have all the mining issues. Everything from the conflict minerals in Congo, to gold mining — which is terribly destructive for the environment — to copper, to some of the very exotic rare earth metals. These are extremely hazardous to both human health and the environment.

Beyond the raw materials, the production of components involves a huge number of chemicals — very exotic chemicals. There’s unfortunately a pretty serious track record of the people making those components getting very sick. There are cancer clusters in several parts of the world where electronics are made. Right now the most well defined one is in Korea. Over 100 young workers have gotten cancer after working in the factories making various Samsung products.

You also have huge amounts of e-waste, containing hazardous chemicals and metals. People around the world are getting sick taking apart these products to scavenge the resources. Throughout the lifecycle, there are millions of people being exposed to these hazards. Unfortunately the problem continues to grow because so little attention is being paid to it.

Are these gadgets also hazardous to users?

Which parts of the smart phones, tablets and laptops are most hazardous for the environment?

The components themselves are the most hazardous — starting with semiconductor chips. These use hundreds of different chemicals, many of them very exotic and many of them poorly tested. Increasingly they’re using nano-materials, which are wild cards at this point in terms of the human and environmental impacts.

The disk drives are similarly risky — they use photoactive chemicals. The circuit boards themselves use very hazardous materials. Then the video displays are very resource intensive.

In addition there are other things like the power supplies and cables. Traditionally all that cabling has involved the use of PVC. The plastic components all have nasty additives such as brominated flame-retardants — which are endocrine disruptors and are suspected of being reproductive hazards. These flame retardants are now being banned around the world, despite still being very prevalent. I think that when you add all that together, you get a very daunting life cycle for the products that we have come to know and rely on.

You mentioned hazards to workers. What specifically do we know?

Going back into the 1970s, when this industry began to develop in Silicon Valley, we noticed people getting sick, often with unusual illnesses. People’s hair would fall out, they would lose their memory, and there were serious cancers and very serious reproductive hazards.

Three different epidemiological studies in the 1980s found high rates of miscarriages amongst the women working in the semiconductor labs. The tech workforce is predominantly younger women of child-bearing age, so the reproductive hazards are extremely important and not very well-regulated. In addition to the cancer cluster in Korea, there have been reports of high rates of cancer in Taiwan at an RCA facility there, in Scotland at a National Semiconductor Facility. There are now reports coming out of China of “cancer villages.”

Is there a specific place in China that is considered ground zero for this?

I’ve actually seen many places. The Chinese government is under such pressure from their own citizens that they’re beginning to realize that they have an enormous problem. There have been situations where whole communities have basically shut down chemical facilities, and sometimes they have gotten quite militant in trying to prevent or stop some of the worst polluting facilities.

There’s a group based in Beijing called IPE (Institute of Public and Environmental Affairs), which has done a whole series of maps of the pollution of the waterways in China and traced that pollution from the contracting factories back to the brands. I think we’re going to see a lot more activism on this. The Chinese government came out with a new policy this month to try to get a better handle on this. I think they’re still very much in the early stages.

You mentioned that e-waste is a major problem, is there a specific part or place in the world where phones are disassembled?

I was involved in a report in 2002 called “Exporting harm: The toxic trashing of Asia,” and that traced the export of e-waste from the US to a little town in south China called Guiyu.

Guiyu has since then become sort of the poster child for the dumping of hazardous e-waste from all around the world. The Chinese government is well aware of this and they have tried to put a stop to it, but it hasn’t been very effective.

There are also well documented reports of dumping throughout Africa and India.

These are usually done in countries with poor infrastructure, where people are desperate for jobs. But the cheapest and easiest way of doing the recycling is also the most dangerous. In the US it’s beginning to be a lot more regulated in terms of what recycling practices are acceptable. That adds cost, so some companies are simply exporting to China, Africa or India — elsewhere that’s illegal, but not in the US. We’re the only major industrial country that has refused to ratify the ‘Basel convention,” which prohibits the shipment of hazardous waste [from wealthy countries to the developing world to stop such dumping].

So how should people dispose of their phones?

Phones are actually one of the easier parts of the puzzle. There’s a very vibrant re-use market. When you buy a new phone, some companies will offer you a trade-in for your old phone.

If you have e-waste that really does not have re-use value, the key is to get it to a responsible recycler — one that has been certified by e-Stewards, which is run by the Basel Action Network, a leading NGO in this field. They’ve developed a very thorough certification. That’s the best guarantee that your e-waste is not going to end up doing harm some place.

Have companies cooperated with the international campaign for responsible technology in trying to reduce the harm of their products?

There has been some significant progress. I’ve seen a lot of changes since I started out over 25 years ago with a group called the Silicon Valley Toxics Coalition. Some of the worst chemicals that the industry has used have been phased out. There was a successful campaign to get rid of chlorofluorocarbons (CFCs) in the late ‘80s, because of their destruction of the Ozone layer.

It turned out the electronics industry was one of the largest users of these chemicals. We held a big rally outside the gates of IBM in 1989 for Earth Day because they were the largest dischargers of CFCs in the country. Within a few months they actually developed an alternative.

That’s been true for some of the other chemicals, but it’s really a handful when you look at the overall chemical use. Like I said, there are hundreds of materials that go into making these products.

The real interesting work going on now looks at the entire set of chemical footprints within the supply chain, getting a handle on which are the most hazardous and then systematically looking for safer alternatives.

Hewlett-Packard has a program is taking the lead in terms of assessing the whole chemical footprint of their supply chain. For a company of that size it’s a huge job, but they’ve got people inside the company that are now working on that pretty diligently.

I would say the problems continue to grow as the industry continues to expand. So it’s really a question of are the solutions keeping up with the creation of the new problems. I would say in that regard we have a long way to go.

Do you use these products and what measures do you take to minimize their impact?

I’m sitting here looking at my computer and printer, and my mobile phone is in my pocket. I’m probably as dependent on this technology as most people.

We’ve never wanted to shut this industry down. In purchasing products people are beginning to be able to make some differentiation, but there’s still not enough.

There’s a company in Europe that calls itself the Fair Phone Company. They are developing a product with no metals from conflict zones. They will have criteria to ensure that the people making that phone are not being exploited by having to work 12-14 hour days as we see too often in some parts of the supply chain. I think we’re seeing things like that beginning to happen, and I think that for consumers we need to get better tools so that people can more clearly identify better choices.

We understand the tremendous benefits of electronics for millions of people around the world, but there needs to be a lot more public pressure to make this a more sustainable industry.