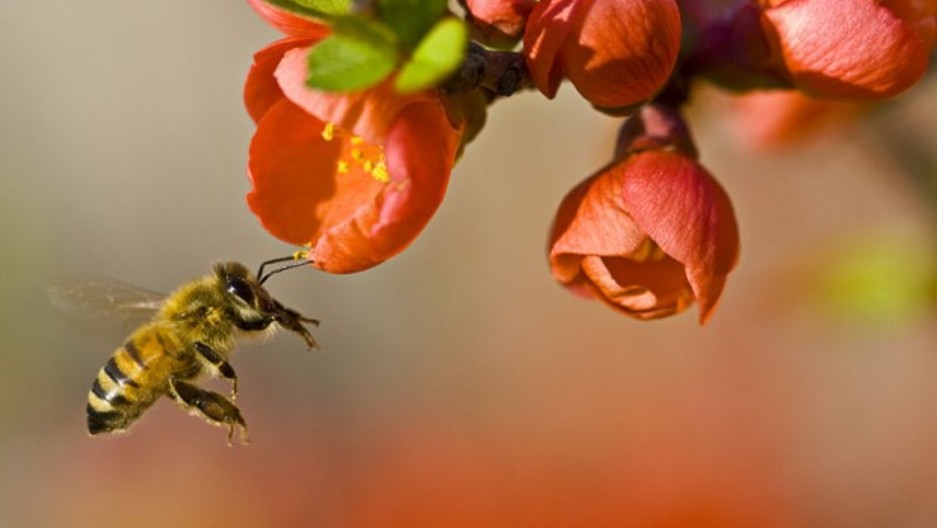 As the spring pollination season approaches in Europe, there's growing concern about the impact of a widely-used group of pesticides on bees—pesticides which are also used in the US.

In a vast cherry orchard outside Lleida, Spain, beekeeper Antoni Areste sets his honeybees loose on the first flowering crop of the season.

It's a busy time of year for Antoni Areste, a beekeeper with 600 hives of honeybees. It's also a worrying time, because Areste says his bee mortality rates are going up year after year.

"We've always had a five to 10 percent yearly loss of hives," Areste says. "But now it's 30 percent. It's not viable. We beekeepers are the protectors of the environment."

Because without bees, flowering plants don't get pollinated.

And it's not just honey producers who are concerned. Bees of all kinds are vital to the pollination of dozens of crops in Spain and around the world. If bees are in trouble, so is much of the food supply.

That's why Areste has closely followed the growing debate in Europe over the use of neonicotinoid pesticides, or 'neonics' for short. Neonics are widely used on an array of flowering crops. And Areste believes traces of the chemicals are contributing to his losses.

He says the neonics take their toll gradually.

You notice how the population of a hive slowly begins to drop," as the bees eat contaminated pollen, Areste says. "Until finally one day the hive just dies. You open the box and you find only some remains of honey and pollen. It's like a ghost town."

No one disputes that neonics — a widely used class of pesticides that attack insects' nervous systems — can kill bees. The question is whether they're harmful at the sub-lethal doses bees and other pollinators currently encounter on food crops.

Neonics have been around for about 30 years, but about 10 years ago they started being used to coat seeds before they're planted. The chemicals are absorbed into the crops and spread throughout their tissues, to fight off insect predators.

The problem, said British bee researcher Dave Goulson, is that when used to treat seeds, traces of the toxins also end up in a plant's flowers, where bees feed, and collect pollen.

Goulson says the amounts of pesticides that the bees encounter on the flowers isn't typically enough to kill the bees. "But these are neurotoxins," he says, 'so they're still going to be affecting its brain."

Goulson and a team of researchers in Scotland have just published their findings from a study on the effects of neonics on wild bumblebees. In their experiment they fed some bumblebees nectar laced with amounts of neonics similar to what you'd find on, say, sunflower or corn crops. Meanwhile they kept a control group of bees pesticide-free by putting their nests outside on their university campus, "and just (letting) them grow as bumblebee nests do."

Weeks later they brought the nests in and measured a key indicator of bee hive health: queen bee production. Each year it's the queens who go out and start new hives. Without them, bee populations die off.

Goulson's team found a huge difference between the pesticide-free bees and the bees exposed in the lab – an 85% drop in queen production.

Goulson believes the drop occurred because the bees exposed to neonics were disoriented, and collected less food for the hives' grubs, which include the next generation of queens.

"Its like they're drunk, or have been taken some other kind of drug," he says, "and it makes them more easily confused, more easily lost, and so on."

It's studies like these that have given European regulators pause. Several European countries already restrict the use of neonics, including France, Italy, Slovenia and Germany. In January Europe's Food Safety Authority concluded that neonics pose an unacceptably high risk to pollinators. That, in part, led the European Commission to propose a two-year ban on their use on flowering crops.

But Europe's agro-chemical industry says studies like Goulson's are flawed. Angel Martin, of the European Crop Protection Association, said such a moratorium would be devastating for agriculture.

"For the major crops like sunflowers, maize, and rapeseed," Martin says, "the lack of availability of this technology for farmers will mean loss of economic growth of 5 billion euros."

And Martin says for some of the pests, growers won't be able to find alternatives.

Environmental groups like Friends of the Earth say there are non-chemical alternatives to the neonics. But Martin says farmers would just stop planting some crops, at the cost of thousands of jobs.

Those arguments convinced enough European governments to block the moratorium, at least for now. The ban fell short of an absolute majority in a vote last week. But it will be reconsidered later this spring.

The vote will be watched closely in the US Neonicotinoids are used heavily on corn there, and last week a coalition of activists filed a lawsuit against the EPA, hoping to force the agency to ban some of the pesticides because of the risk to bees.