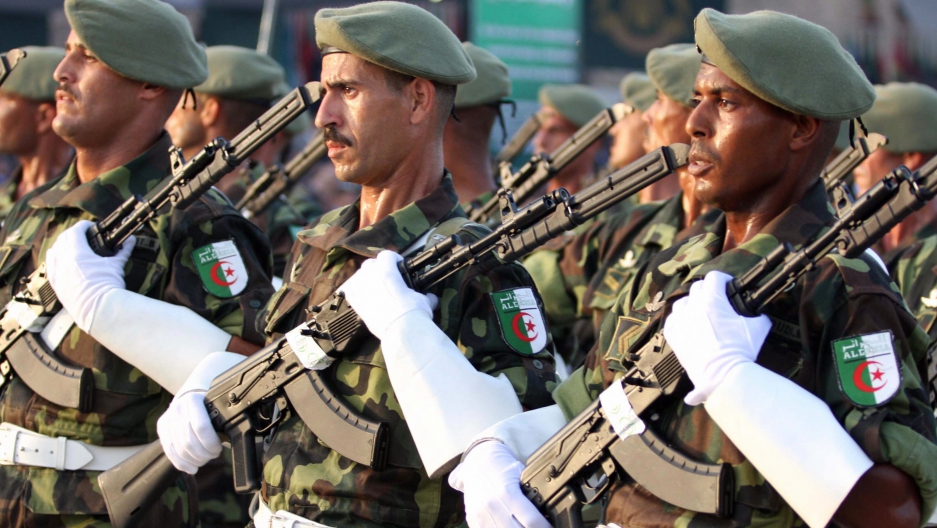 ALGIERS, Algeria — Amid the wrangle over who will be Algeria’s next president, anxieties are stirring about a mighty force that could shake things up, if not take over entirely: the Algerian military.

Seventy-six-year-old Abdelaziz Bouteflika is the country’s longest-serving president, in office for nearly 14 years. But concerns over his health are mounting as politicians and security officials debate the wisdom of the aging leader running for a fourth term in fresh polls slated for 2014.

Speculation is rife that the army, which staged a coup after democratic elections in 1992, sparking a years-long civil war, could again seize the helm to steer the country through a potentially volatile succession crisis that could destabilize Africa's largest country.

Cloaked in secrecy, Algeria's military wields considerable influence in the country's politics, as well as its economy.

Instability emanating from Islamist militants operating here and across the region is one concern. Algeria's military has emerged a key ally in Washington's war on Al Qaeda-linked groups in North Africa.

But Algeria’s army officers, too — buoyed by the country's position as one of the world's top oil and gas producers — maintain billions in private and other business interests they would likely want to keep shielded from civilian oversight under any new government.

“If the country is in danger, if the government does not reach a consensus,” the military “will react the way the army reacted in Egypt,” said retired Algerian army colonel, Mohamed Chafik Mesbah.

In Egypt, a coterie of Egyptian generals assumed control of the country during the uprising two years ago, in what was widely seen as a bid to protect their own political and economic interests from greater radical change.

Though their assets are difficult to track — hidden by layers of subsidiaries, registered under names of relatives or other associates, and with earnings funneled into foreign bank accounts or real estate abroad — some of Algeria’s top generals have transformed into an informal but influential trade lobby that ensures the country’s key business deals enrich them and their families.

Despite Bouteflika’s work to blunt the military’s political influence over the years, Algeria is also still ruled by a system where primary decisions are made by a small consortium of military and intelligence figures, a political force Algerians refer to as “le pouvoir,” French for “the power.”

As a result, the distribution of Algeria’s external revenues and defense and security policy “remain firmly in military and security hands,” writes Claire Spencer, Algeria expert at the London-based Chatham House think tank.

“We are living in a military state,” said 58-year-old Murad, a retired resident of Algiers’ old city. He did not want to give his last name. “Everybody knows how much power the military has, but everybody is scared to talk about it.”

But while Bouteflika may have angled to weaken some of the army’s political clout, he shirked away from touching on the military’s intricate network of economic holdings — a move that could have produced a fierce backlash, and not just from the army. Bouteflika’s cronies and even the president himself are believed to benefit from the network, analysts say.

It remains unclear if any successor to Bouteflika would push to challenge the generals to open up about their financial deals. Algeria’s parliament votes on the national defense budget, but it’s not itemized so spending details are little known, lawmakers say.

“Everyday people are talking about it,” Lamine, a 65-year-old resident of the eastern city of Boumerdes, said of the army’s wealth. “We cannot see it openly in the streets, but everybody knows what kind of money they have. We don’t like it. It’s a system that we have to destroy. If the army let the president work, maybe he could save the country.”

Sources within the Algerian business community, who asked to stay anonymous because of the sensitivity of the issue, say army-linked companies control as much as 15 percent of the import market here.

Retired and active generals and their families allegedly reap windfall earnings from the billions-strong import sector, including profits and dollar commissions on deliveries of wheat, raw materials, pharmaceuticals, sugar and foreign-made cars.

They also take cuts — as much as 5 to 10 percent — on construction and infrastructure projects run by foreign and local firms alike, economists say. The money is allegedly often laundered through real estate investments abroad, particularly in Paris but also other European cities, according to various reports.

The Paris-based Banque Intercontinentale Arabe, a joint Libyan-Algerian bank, is known in Algeria as “the bank of the generals” for its prominent role in holding the financial assets of the officers and their families. Algerian business sources say other banks in the United Arab Emirates, including the Arab Bank for Investment and Foreign Trade, are favored by the generals for hiding and investing funds.

If you are an ordinary businessman and want to open an import-export business, “if you touch any of [the army’s] interests, your venture is broken from the beginning,” said an economics reporter at one of Algeria’s largest newspapers, who also wished to stay anonymous.

The reporter has spent years investigating army holdings but refrains from publishing the findings in Algerian media, whose reports the security services censor. Some generals even hold shares in Algerian newspapers.

“You must have support within the administration,” the journalist said. “They are a mafia. Nobody can compete with them.”

Algeria analysts have linked some of the country’s top generals — including the former defense minister, Gen. Khaled Nezzar — to shady business deals and money laundering scandals in Algeria and in Europe.

The former commander of Algeria’s ground forces, retired Gen. Kamel Abderrahim, owns the profitable Industries Medico-Chirurgicales, a pharmaceutical and medical supply company that maintains 40 percent of the market share for kidney dialysis machines in West Africa. His son, Nadir Abderrahim, formally runs the company, which has an annual turnover of 100 million euros.

Many other high-ranking officers — such as generals Mohamed Lamiri, Mohamed Mediene, and Mohamed Betchine — are rumored to have accumulated fortunes estimated in the hundreds of millions in everything from weapons deals to South African diamond mining, but the reports remain difficult to verify.

The generals go to great lengths to conceal their wealth.

“In the future, if there is a real democratic government, they can pressure the army to extract itself from the economy,” said Abdul Haq Lamiri, an economist at the International Institute of Management in Algiers. “The government should give them a way out — promote a law that allows them to re-enter the economy legitimately and without punishment.”