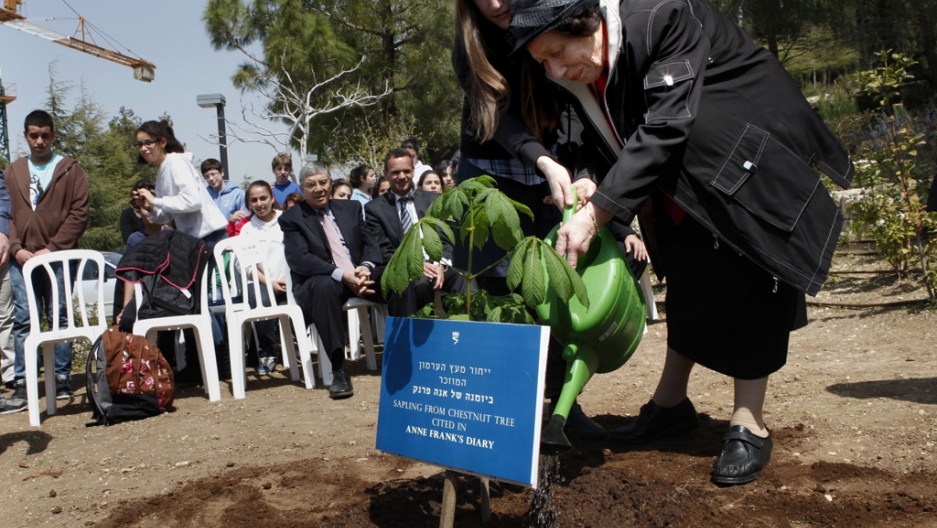 Hanna Pick, a Holocaust survivor and a friend of Anne Frank, waters a sapling from the chestnut tree that Anne wrote about in her diary next to the Children's Memorial at the Yad Vashem Holocaust Memorial in Jerusalem on March 26, 2012.
Credit: GALI TIBBON
Share

Eleven American locations will plant chestnut saplings from the tree that brought Anne Frank some solace as she hid from the Nazis in Second World War Amsterdam.

The Children’s Museum in Indianapolis will plant the first sapling next month, The Anne Frank Center in New York announced, as a symbol of tolerance.

“We chose the eleven sites because of their importance in American history and their commitment to continuing education about tolerance,” center executive director Yvonne Simons said in a press release.

“The participating organizations expressed a strong understanding of and a desire to combat the horrible consequences of intolerance, racism, hatred and discrimination that destroys countries, communities and innocents like Anne Frank.”

The other sites include Central High School and the Clinton Presidential Center in Little Rock, Ark.; Boston Common; schools in California and New York; and Holocaust centers in Washington, Idaho and Michigan.

Central high school was the site of desegregation and the New York site commemorates Sept. 11 victims, The Associated Press reported.

The tree was Frank’s connection to freedom and the outside world. She wrote about it frequently in her now famous diary, according to Anne Frank House online.

Frank spent two years hiding from Nazi invaders between July 1942 and August 1944. She could see the tree from the attic where she hid.

“The two of us looked out at the blue sky, the bare chestnut tree glistening with dew, the seagulls and other birds glinting with silver as they swooped through the air, and we were so moved and entranced that we couldn’t speak,” the Feb. 23, 1944, entry says.

The tree was more than 170 years old when high winds toppled it, along with a metal support structure, in August 2010.

It was rotted through the center due to a fungus, but saplings have been planted elsewhere across the world.