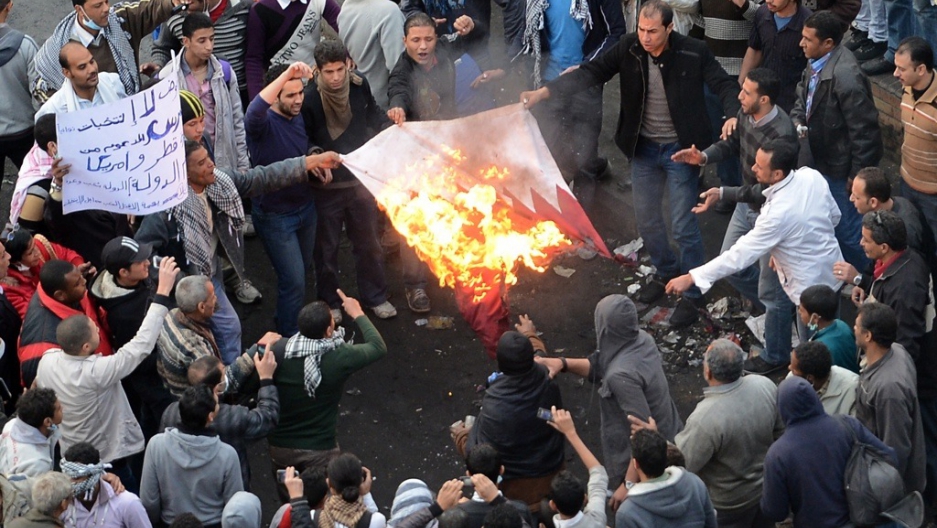 CAIRO, Egypt — Egypt’s economy is edging closer to collapse, and now there is one less place the government here can turn to for much-needed financial aid.

After promising $5 billion in soft loans and grants to help curb the Egyptian pound’s recent slide against the dollar, the tiny but vastly wealthy Gulf nation of Qatar is now backing off pledges of any further funding for the cash-strapped nation.

Observers saw Qatar and its royal family as initial backers of the Muslim Brotherhood government and its president, Mohamed Morsi, providing substantial funds and deposits to Egypt’s Central Bank. But earlier this month, the Qatari finance minister said there were no plans to inject more cash into Egypt’s flagging economy — crippled by a massive budget deficit. The finance minister did not give a reason.

The apparent about-face suggests that even countries with a seemingly unwavering commitment to Egypt’s economic and political recovery are having second thoughts about deepening their involvement with the increasingly unstable nation.

Morsi’s authority is under threat as sporadic violence chips away at law and order and parliamentary elections are stalled. Rising prices and fuel shortages are contributing to ongoing unrest, and the government has yet to put forth a comprehensive economic program.

“On the Qatari side, they are putting their money into a bit of a black hole,” Michael Stephens, a researcher at the Royal United Services Institute think-tank in Qatar, said of the country’s aid to Egypt. “What we don’t know is whether or not they [the Qataris] have allocated a specific budget for Egypt — how long they are willing to keep funding. They will stay in Egypt, but they will also be looking for other allies.”

It is unclear why Qatar, whose ruling monarchy is notoriously opaque, has at least temporarily halted its aid to Egypt. Whether or not the full $5 billion has already been disbursed has also not been made public, making it difficult for economists to gauge its impact on Egypt’s still faltering economy.

But the Gulf monarchy’s initial support for Egypt’s post-revolution governments, including the Morsi administration, was part of a wider push to project regional influence in the wake of the uprisings that remade the Arab world.

Armed with cash from its lucrative natural gas reserves — and spurred by rivalries with Gulf neighbors, Saudi Arabia and the United Arab Emirates — Qatar saw Egypt as a vehicle for the larger goal of boosting its status on the world stage, analysts say.

Egypt is the region’s historical powerhouse and the Arab world’s most populous nation. In terms of diplomacy, Egypt offers a gateway to Gaza, where Qatar’s courtship with Hamas is transforming it into an important player in the Israeli-Palestinian conflict.

Cairo is also host to the Arab League, through which the Qatari leadership channels its Syria policy. And Qatar saw the Brotherhood as having more staying power than its political rivals.

“It’s not a surprise that Qatar had been looking at the Brotherhood as a means to sort of project its influence,” said Hani Sabra, director of the Middle East and North Africa at the Eurasia Group, a political risk consultancy firm, in New York.

Qatar was in fact a longtime opponent of the former regime of Hosni Mubarak.

“Qatar has had a long relationship with Brotherhood figures that other GCC [Gulf Cooperation Council] countries simply didn’t,” Sabra said.

“They want security for Egypt, because that means security for the region and security for them,” Brotherhood leader in Cairo, Ayman Abdel Ghani, said of Qatar. “We were in need of an economic boost and Qatar offered that at a very crucial time. It wants to strengthen the current [Morsi] government.”

But Qatar’s support for Egypt was never anchored in ideology, Gulf experts say. In spite of the Brotherhood ties and the billions in aid, Qatar does not deliberately want the Islamist movement to takeover, according to Stephens.

“They tend to back people they feel are on the ascendancy. It’s very pragmatic,” Stephens said. “Qatar is trying to ensure its interests are met in Egypt. They’re happy to let Egypt be whatever it wants to be, as long as [Qatari] interests are maintained.”

Stephens says that in addition to diplomatic clout, Qatar likely also looked for preferential business deals in Egypt, particularly in the construction sector. The Qatari government was recapitalizing Egyptian banks.

But with economic mismanagement and endless political turmoil, Qatar is likely at least reviewing its policy of lavishing billions on an unpredictable regime.

“I think there could be the view in Doha that: we’ll back the Brotherhood if they’re dominant and ascendant. But if they can’t assert authority, we need to step back and assess this,” Sabra said.

“Qatari decision-makers could be saying: It doesn’t make sense to have the perception that we have adopted Egypt,” he said. “The cost would be huge.”