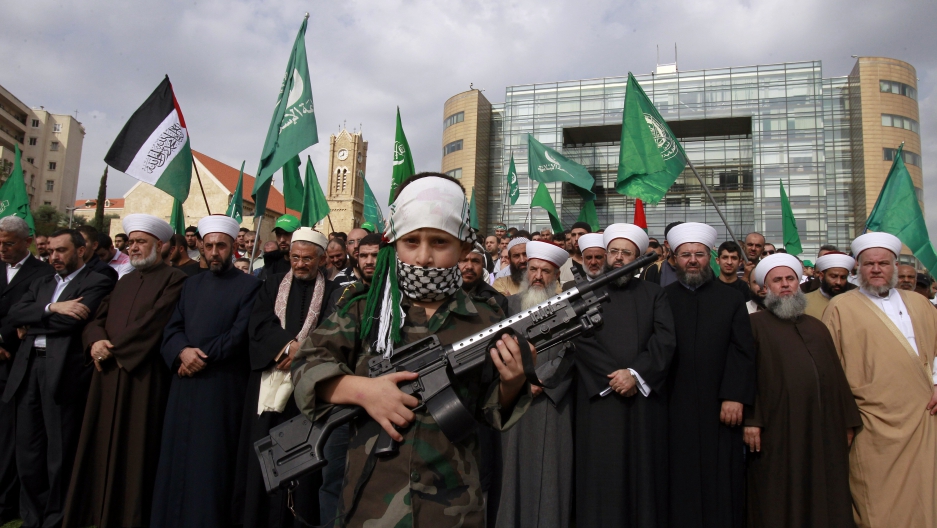 A Palestinian boy carries a toy gun during a rally by Sunni Muslim group Jamaa Islamiya against the ongoing Israeli occupation of Gaza outside the offices of the United Nations Economic and Social Commission for Western Asia (ESCWA) in the Lebanese capital of Beirut in November 2012.
Credit: Anwar Amro
Share

Chibli Mallat is a visiting professor at Yale Law School, as well as a professor of Middle Eastern Law and Politics at the University of Utah College of Law and the EU Jean Monnet Chair of European Law at St. Joseph’s University in Lebanon.

A human rights lawyer, Mallat’s law office in Lebanon serves as legal counsel for Amnesty International’s Middle East outpost. He was a leader of the Cedar Revolution and ran a grassroots presidential campaign in Lebanon, in addition to establishing the NGO “Right to Nonviolence,” which focuses on constitutional reform and transitional justice.

Mallat spoke to GlobalPost — in partnership with the USC Annenberg School for Communication and Journalism — about the effect of the Syrian conflict on surrounding regions, and the possibility of a legal response to sectarian violence.

Lauren Madow: What is the effect of almost 200,000 Syrian refugees having on the fragile political situation in Lebanon?

Chibli Mallat: Refugee crises are manageable so long as they are not permanent. The longer the refugees are unable to return home, the riskier their entanglement with the domestic Lebanese scene.

CM: While the army is seen as the last stop before anarchy by young and old, this is not a healthy or sustainable arrangement. The Lebanese army is fragile, and mirrors the very sectarian groups that compose the nation. Normally security is provided by a stable government that the population accepts. In Lebanon, the government excludes a good part of the population — most of the so-called March 14 faction — and is itself divided over Syria. Hezbollah is actively engaged in the Syrian war, but the ministers of [Progressive Socialist Party leader Walid] Jumblatt have openly sided with the Syrian revolution. Prime Minister [Najib] Mikati navigates within his own government a political minefield which is compounded by the imminence of national elections in June. Every day in Beirut feels more dangerous than the previous one.

LM: To what extent is Saudi, Iraqi, Lebanese and other regional youth participation in sectarian battles (in their own countries as well as in Syria) a result of government manipulation?

CM: What motivates young people to take up arms is a strong belief in their cause. But generally people don’t go lightly to war abroad unless they are part of a hardened militia, such as Hezbollah and Qaeda-like embattled, Mujahideen-style Saudis and other Muslims worldwide in Syria. Inside it is different, because the battle comes to the heart of your city or village. I find little traction to the argument of government manipulation. This does not mean that the Iranians in power are not sectarian, or that the government of the Saudi family does not operate in a sectarian fashion, with immense means to fan extreme Sunni and Shia factionalism across the region.

LM: What type of action might regional or international governments take to diffuse tension? What might be the pitfalls for the Obama administration in dealing with the conflict?

CM: The Syrian revolution was from the beginning key to the fate of the nonviolent revolution in the whole Middle East. By not protecting the massive and determinedly peaceful demonstrators for four straight months, the Obama administration has committed the gravest mistake of its first term. It is difficult to reverse course now, unless the whole spirit of foreign policy is changed, starting with the president. But Syria will not go away. The only way forward is to fully back the coalition oppositional government just established. Then the US government will have a panoply of measures to enhance its chances of rallying moderate Syrians, rather than extreme Islamists, to ensure a less bloody post-[Syrian President] Bashar al-Assad period.

LM: How has the Sunni exodus from Iraq contributed to the region's current instability?

CM: Actually there was a reverse exodus, and Sunni Iraqis who had fled the civil war in 2006-2007 in Baghdad have mostly returned. Iraq is safer than Syria. Some returnees no doubt come back with a vengeance.

LM: Can you offer a prognosis for Iraq's leadership if Assad should be removed from power? What would happen with sectarian violence in Syria if Assad is removed?

CM: The problem in Iraq is the disenchantment with the current prime minister. Unless a new government is established that brings together leaders of all three major components of society, Kurds, Sunnis and Shias, the impact of Syria will be grave on Iraq, whether Assad remains in power or not. The longer he stays in power, the worse it will get in Iraq.

LM: How would you characterize the relationship between al-Qaeda and the Sunni majority in the region?

CM: It depends of course on interlocutor and time. When Osama bin Laden was killed, it hardly occasioned a blip because of the upward dynamic of the Middle East revolution to which his extremism had contributed nothing. When the revolution stalled, sectarianism rose dramatically, and vocal Sunnism, including al-Qaeda’s clones, started to prevail. There is a simple correlation between deadlocked regimes and frustrated populations, on one hand, and the rise of extremism across the Middle East on the other. This is true for al-Qaeda, the Israeli settler movement and extremist Shia in Lebanon.

LM: In view of the recent Arab uprisings, can constitutionally mandated religious tolerance be a viable step toward a solution to sectarian violence?

CM: It is hard to mandate tolerance, constitutionally or otherwise. To make sectarian violence recede, we need a return to the early mindset of the revolution: nonviolent, wide, inclusive, anti-authoritarian. This means that the new leaders must rule according to that philosophy. This goes from [Egypt’s] President [Mohamed] Morsi bringing in a prime minister from the opposition with a cabinet that includes prominent women and Copts, to the Yemeni revolution and its UN advisors stifling the secession in the south by removing any influence by [former President Ali Abdullah] Saleh and bringing him to trial. Otherwise the slide down to violence, including sectarianism and secession, will continue.

LM: Could a truth and reconciliation commission be effective in the region? What leaders would you point to if that were possible?

CM: Accountability is key, and there is no stability without justice. Two essential routes for the success of the ongoing revolution are judicial accountability, and truth and justice (rather than reconciliation) processes. These can only come from the new regimes, and it has happened to some extent. [Former Egyptian President Hosni] Mubarak is behind bars, so is [Abdullah] Senussi, the prime henchman of [Former Libyan President Muammar] Gaddafi. Fair trials must be made a central piece of revolutionary policy, and the greatest challenge is with the usual pitfalls: partiality of judges, impotent commissions and the marginalization of victims. This is not an easy task and legal leadership and expertise is scarce.