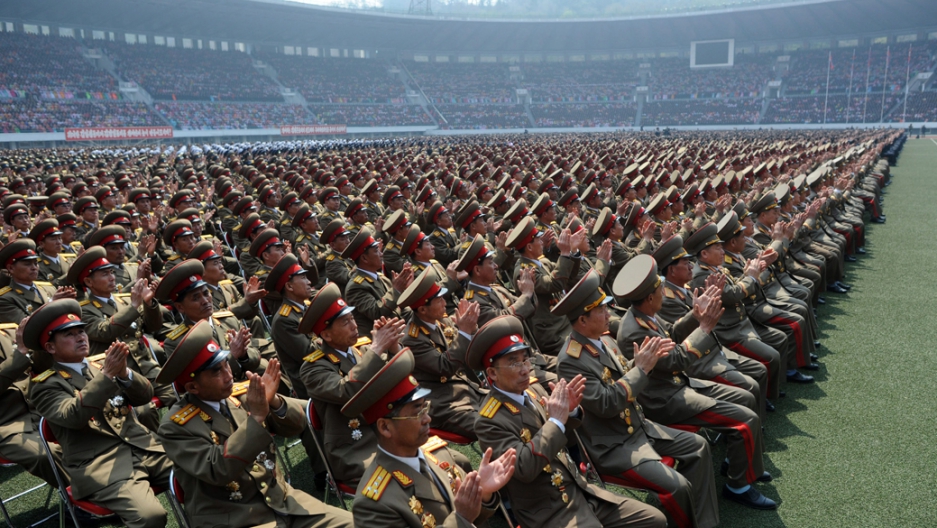 North Korean soldiers applaud as they listen to a speech during an official ceremony attended by leader Kim Jong-Un at a stadium in Pyongyang on April 14, 2012. Negotiations with North Korea in recent history have focused increasingly on security issues, in lieu of human rights abuses that continue to affect people throughout Kim Jong-Un's hermit kingdom.
Credit: Pedro Ugarte
Share

It has now been over four months since United States citizen Kenneth Bae was arrested by North Korean authorities for allegedly committing "hostile acts against the republic."

Bae, the owner of a North Korea tour company, entered the country legally with five European tourists on Nov. 3. South Korean reports have suggested that Bae had been prevented from leaving the country and detained after North Korean security officials found he had a computer hard disk that contained data related to the country's human rights crisis. One observer close to the case conjectured that his "crime against the state" may have been to take photographs of starving North Korean orphans.

A Jan. 20 report from Japan's Kyodo News, based on information given by a North Korean government source, stated that Bae "could be sentenced to re-education through labor for an indefinite term or even given the death penalty."

The escalating instability and uncertainty on the Korean peninsula, with North Korea's recent renunciation of the Korean War Armistice and its unusually brazen threats of a preemptive nuclear strike, makes one truly fear for Bae's life.

Whatever actually happened, it is certain that Bae is not guilty of any crime and has been effectively taken hostage by North Korea. The government of Kim Jong-un is a genocidal regime which, if such a thing as international justice exist, will one day be indicted by the International Criminal Court for genocide and crimes against humanity.

The 1949 Geneva Conventions explicitly prohibit hostage taking. Under Article 8 of the Rome Statute of the International Criminal Court, the "taking of hostages" constitutes a war crime. Despite the fact that an egregious injustice has been committed against Bae and his family, his case is indicative of a broader humanitarian and human rights emergency, which United Nations Human Rights Commissioner Navi Pillay recently described to Reuters as the "worst in the whole world."

The UN’s Responsibility to Protect doctrine asserts that the international community has the obligation to intervene when a given state fails to protect its population from genocide, war crimes, ethnic cleansing and crimes against humanity, or is the perpetrator of such crimes. North Korea has and continues to commit all four of these crimes against defenseless and unarmed populations.

Genocide Watch, a non-partisan NGO (non-governmental organization), which exists "to predict, prevent, stop, and punish genocide," published a report on Dec. 19, 2011, which demonstrated conclusively that North Korea has committed genocide. It identified North Korea’s decades-long, racially based policy of killing the half-Chinese babies of North Korean women that have been forcibly repatriated by China, and its targeted and systematic annihilation of its indigenous religious population and their families.

From its inception in 1948 and in blatant violation of the 1953 Korean War Armistice, North Korea has routinely engaged in acts of terrorism, murder and abduction in violation of international humanitarian law.

In 1987, for example, two North Korean agents, acting on a direct order by Kim Jong-il, planted a bomb on Korean Air Flight 858 that killed all 115 people on board. In a 1983 assassination bombing plot against Chun Doo-hwan, the fifth president of South Korea, 21 people were killed and 46 wounded.

More recently, in March 2010, an unprovoked North Korean torpedo attack resulted in the sinking of a South Korean navy ship, killing 46 sailors. The following November, a shelling of South Korean territory resulted in the death of four innocent South Koreans; both cases have since been referred to the International Criminal Court for possible war crimes.

North Korea continues to practice ethnic cleansing towards the children of pregnant North Korean women forcibly repatriated by China. A state-sanctioned famine and tyranny has forced hundreds of thousands of North Koreans to flee to China in order to survive.

Even if a North Korean woman is married to a Chinese citizen, Chinese authorities will repatriate them in accordance with the terms of a 1961 treaty and subsequent 1986 border protocol with North Korea. These arrangements are in flagrant contravention of China's obligations under the UN Convention Relating to the Status of Refugees, its 1967 protocol and the UN Convention Against Torture.

When forcibly returned, refugees suffer torture, imprisonment in death camps and execution. Pregnant North Korean women, often impregnated by rape, are subjected to brutal forced abortions and their babies to infanticide. According to the US State Department, "The reason given for this policy was to prevent the birth of half-Chinese children."

Mass atrocities in North Korea are soon to be officially declared by the UN as crimes against humanity. Unprecedented actions are underway including the creation of a Commission of Inquiry, as there was for Darfur in 2004. Both the UN High Commissioner for Human Rights and the UN Special Rapporteur on the situation of human rights in North Korea are vocal advocates for the Commission of Inquiry and have repeatedly used the phrase "crimes against humanity" when speaking about North Korea's human rights situation.

Several decades of engagement and negotiation with North Korea have focused on security issues. Crimes against humanity have been relegated to a low-grade status. For the millions who suffer from a state-induced famine and the hundreds of thousands of innocents perishing in hellish concentration camps, this approach has proven to be not only unethical but also immensely harmful.

The time is now for the US and other members of the world community to fundamentally reassess North Korean policy to focus on the unparalleled humanitarian and human rights emergency unfolding in the country today.

Robert Park is a minister, human rights activist and founding member of the nonpartisan Worldwide Coalition to Stop Genocide in North Korea, a nonprofit organization working to provide life-saving resources to victims and their families in North Korea. He is a former detainee who entered North Korea on Christmas day of 2009 to protest against genocide and crimes against humanity taking place there. Contact: www.robertparkofficial.com