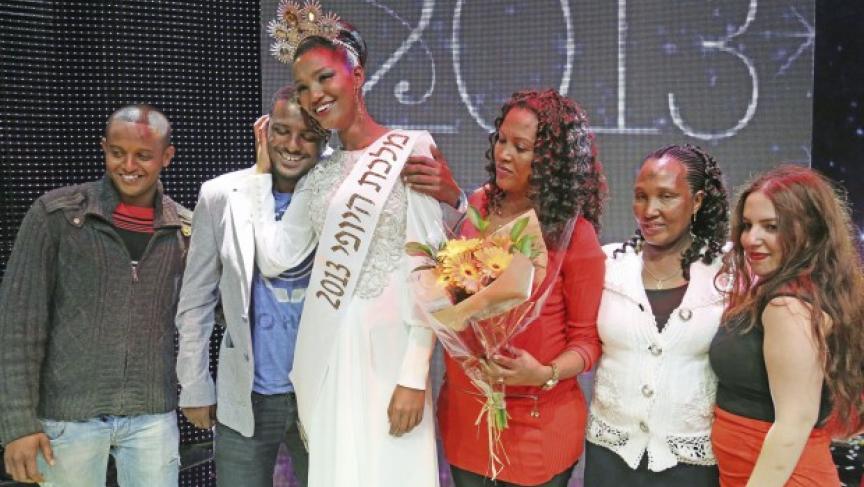 Share
Israel is putting its best face forward for President Obama, and what better face to put forward for America's first black president than Israel's first black beauty queen? The newly crowned Miss Israel is an Ethiopian Jewish immigrant to Israel. She is joining Obama Thursday for the official state dinner in Jerusalem. Ethiopian immigrants have struggled to integrate into Israeli society, but Obama will be getting a taste of some of their recent success stories. A few weeks ago, more than a quarter of all Israeli TV viewers watched the judges announce the new Miss Israel of 2013. Titi is her name, short for Yityish Aynaw. She was the only black finalist in this year's beauty pageant and she has become Israel's first black beauty queen. She's tall, commanding, and outspoken. "It's time that someone from my community, someone with my skin color, who is Israeli just like everyone else, represent the country," Aynaw said. What captivated the judges was not only her beauty, but also her life story. Born in a small town, Titi was orphaned by the time she was about 10. She moved to Israel to live with her grandparents, who had already left Ethiopia for a new life here. Titi said as an Ethiopian Jew, she grew up with stories about the Land of milk and honey, but her new life in Israel wasn't all milk and honey. Titi hardly remembered her grandparents. She was sent to an Israeli boarding school without knowing a word of Hebrew. Some of her classmates made fun of her Ethiopian name, Yitayish. "What is 'Yitayish?' This is my name. but it sounds weird," she says. "There were times they'd call me 'Tayish.' In Hebrew that's a kind of animal. You know?" But she was proud of her Ethiopian heritage, and unlike many other Ethiopian Jewish immigrants who took on Hebrew names, she kept her own. She learned Hebrew fast, excelled in school, and became an army officer after graduation. And now, she's been crowned Israel's most beautiful woman. Immediately after winning the competition, she was photographed for La Isha, Israel's equivalent of Vogue magazine. She's only the second black Israeli to appear on the cover. "That's why I feel like I made history, that I blazed a trail," she says. "An Ethiopian woman is on the cover of the magazine!" she said. Ethiopian Jews are said to be the fabled descendants of the Israelite tribe of Dan. Israel began airlifting them to the Jewish state three decades ago. Today there are 120,000 Ethiopian Jews in Israel. Many of them arrived from poor villages, having never seen refrigerators or telephones. They're still struggling to integrate, and many say they face deep-seated racism. Titi's win as Miss Israel is a symbolic step toward more acceptance, says pageant director Iris Cohen. "When you stand on this stage, and you represent Israel if you win, this is a stamp of legitimacy of being a citizen of Israel," Cohen says. "Beyond the difficulty of being from a different country, different language, a little bit of racism, which is all over the world, if you are a beauty queen, it does mean something," Cohen said. There's another sampling of Ethiopian-Israeli culture that President Obama has tasted on his trip here. Wednesday, at dinner with Prime Minister Benjamin Netanyahu, Obama was serenaded by Israeli pop singer Idan Raichel, who infuses his tunes with Ethiopian chanting in Amharic. Raichel performed along with Ethiopian-Israeli singer Kabra Kasai. It's been a pioneering couple of years for Ethiopian-born Israelis. In 2011, the Israeli version of American Idol had its first Ethiopian-born winner — Hagit Yaso. Last year, Israel appointed its first Ethiopian-born ambassador. And this year, Israel elected its first Ethiopian-born woman to parliament. The new Miss Israel sets yet another milestone for the Ethiopian-Israeli community. The fact that Israel is showing her off to President Obama is nothing to be cynical about, says Ethiopian-Israeli Orit Isaschar, who is with the Israeli Association for Ethiopian Jews. "You see that Israel is really trying to show the Ethiopian faces that are part of the Israeli society, so its really important but its not enough," Isaschar says. "We want to see new Ethiopians people … leading in industry, in academic field. We don't have Ethiopian researchers at all. I want to see TV anchors and commentators. To see in every field, in every area, an Ethiopian person." Maybe one day a US President will come to Israel and meet a black head of state. Hey, it happened in America.