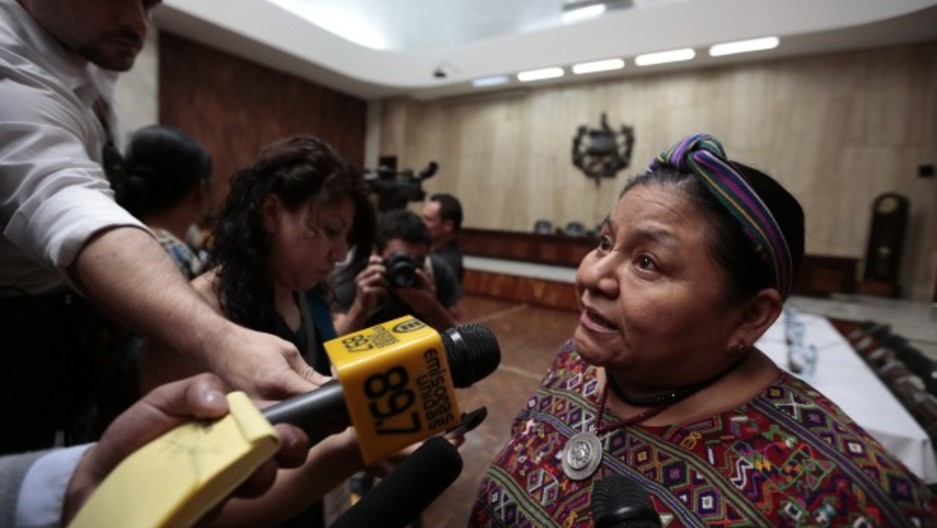 Nobel Peace Prize winner Rigoberta Menchu talks with the media before the start of the first session of former Guatemalan dictator Efrain Rios Montt's trial at the Supreme Court of Justice in Guatemala City, March 19, 2013. The trial of Rios Montt on charges of genocide and crimes against humanity opened on Tuesday, the first time a country has prosecuted an ex-head of state in a national court on such charges. REUTERS/Jorge Dan Lopez (GUATEMALA - Tags: POLITICS CRIME LAW) - RTR3F6ZZ

Share
Former Guatemalan dictator Efrain Ríos Montt was in court Thursday morning for the second day of his genocide trial. The retired general listened as a dozen prosecution witnesses described atrocities under his regime, how the Guatemalan Army swept through their villages in the early 1980s, killing their family members. The trial marks the first and only genocide proceedings against a former head of state ever held in a domestic court. Kate Doyle of the Guatemala Documentation Project for the National Security Archive has been monitoring the proceedings.