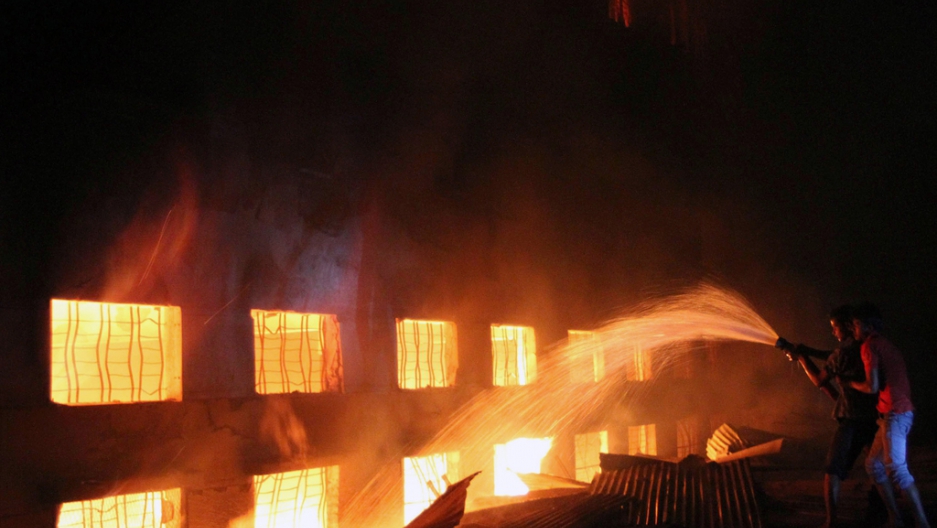 This picture taken on Nov. 24, 2012, shows Bangladeshi people and firefighters trying to extinguish a fire at the Tazreen Fashion factory in Savar, Bangladesh, 30 kilometers north of the capital Dhaka. The death toll from the fire claimed the lives of at least 117 people.
Credit: Palash Khan
Share

BOSTON — Work. Many of us spend most of our waking hours doing it. We seek it out, we need it to pay the rent.

And we often whinge about it.

But is our daily slog really all that bad?

If you're reading this on a computer, chances are you labor in the relative safety of an office, in a chair, in front of a desk, under a protective roof.

You can rest certain that the walls won't cave in; that the air you're breathing won't cause your lungs to seize up; that your clients won't open fire to pilfer the contents of your wallet.

But that's a comfort that many among the world's 3 billion workers lack.

Here's an easy-to-ignore fact: every day, millions of people submit themselves to risks that most urban Americans would consider inconceivable — in the quotidian quest to make ends meet. More than 6,000 die each day in workplace accidents. Many others are injured or sickened.

So exactly what tyranny and abuse do workers suffer to feed their families? What are the world's most dangerous jobs?

GlobalPost asked Charles Kernaghan, director of the Institute for Global Labour and Human Rights. Kernaghan is well-known for his fervent advocacy on behalf of downtrodden workers in poverty-stricken areas of the world, not to mention his antagonistic stance toward the persistence of sweatshop conditions. In 1996, he famously caused Kathie Lee Gifford to cry when he revealed that child laborers in Honduras were making her clothing line. He has been called an "economic terrorist" by some manufacturers.

But of course, one man's terrorist is another's freedom fighter.

The interview has been edited for clarity and length.

GlobalPost: What are the world’s most dangerous jobs?

Charles Kernaghan: Right up front I’d put the Pakistan and Bangladeshi shipbreaking — that’s absolutely a death trap. I believe that’s the most dangerous job in the world.

On top of that, there’s agate polishing in India. We worked on a case there with silicosis victims — I mean it just tore our hearts out to see what was going on.

In Bangladesh, there are 4 million garment workers — they’re getting starved to death too with pitiful wages, and they’re brutally overworked. And there are no health and safety standards. We saw the result of that in the Tazreen Factory fire on Nov. 24, 2012, which killed at least 117 workers. Less than a month later another factory, Smart Fashion, went up in flames.

In China, we recently researched a factory called Kaisi, workers were making drawer rails which open and close the cabinets. Six fingers were severed in one single month among workers producing side rails for drawers. The estimate in China, just in the Pearl River Delta area, is that each year 40,000 fingers are severed or crushed.

Also, in Honduras many divers catching lobsters are dying. They’re fighting for every lobster that they can get, that’s what they’re going to get paid for the season. No professional divers have ever done what these workers have done. They just race to the bottom and then race right to the top, [without decompressing]. On account of that, some of them gets the bends. Some die and some get crippled. They have very rudimentary equipment, but the main problem is that they don’t stop — it’s unbelievable that they’re not all dead.

What is being done to make workplaces around the world safer?

In the developing countries almost nothing is being done. They are a lot of proposals, like the International Labor Organization standards, but these are never implemented.

With the shipbreakers there’s absolutely nothing, I mean there are just no health or safety precautions. First of all they’re not even contract workers, so that’s how they really cheat the workers because they’re day-to-day laborers. They get paid very little.

When we were in Bangladesh, a boy named Korshed —15 years of age — was working a night shift, all night long from 7:00 p.m. to 7:00 a.m. during the monsoon season. It was July 17, 2012, when in the middle of the night at 3:00 a.m. a gigantic metal slab fell and crushed this young kid. Killed, dead on the spot. There’s no health and safety records whatsoever, the workers are just sitting ducks.

What are the first steps that need to be taken to better protect workers?

All that can be done now to address these dangerous situations is muckraking. The only way that we can have an impact is to go and document every single piece of it. Take the photographs, interview the workers, interview the parents, because there’s no rule of law — especially in very poor, developing countries like Bangladesh. There, when workers were killed in shipbreaking, the owners just threw them off the ship into the water. They wouldn’t even report it; at least now deaths are being reported, but that’s only because of the brave people on the ground.

Basically, the rule of law doesn’t exist, and the international labor standards are never implemented. Not in the garment industry in Bangladesh, not in the ship breaking, not in the factories in China. You just come up to that same problem all the time.

So the ultimate goal of your muckraking is to get international standards recognized by all countries and have them enforced?

Yes, but they’re not even close to that. The international workers’ rights — freedom of association, right to organize and bargain collectively, no child labor, safe and decent working conditions — they’re out there and everyone talks about them, but they’re never implemented.

In many ways nothing is going to change. What happens is the corporations — no matter whether they’re involved in garments, electronics, shipbreaking — demand enforceable laws to protect trademarks. When we say to these companies “can’t we have similar laws to protect the rights of human beings?” The very same companies come back to us and say, ‘No, that would be an impediment to free trade.’

After the Tazreen Fashions fire that killed at least 117 people last year in Bangladesh, many people were shocked to learn that Wal-Mart actually knew that the facility was unsafe. Are there other workplaces that you can name that face imminent threats that we know of?

There are really no protections because companies like Wal-Mart and other corporations want to pay the least amount that they can, pennies per garment. Wal-Mart was asked in 2010-11 to put in some money so that there could be fire safety improvements, fire extinguishers and so on, and they flat out said ‘no.’

At this point in countries like Bangladesh and Pakistan, there’s no serious attempt to improve conditions for the garment workers. Hopefully something will give, but right now corporations will have nothing to do with it.

What brands are or products should Americans avoid because of the way workers are being treated? What can Americans do to help other than avoid buying these products?

It’s hard because of what happened early on. Like in the Triangle Shirtwaist Factory Fire, when the fire broke out so many workers leapt to their deaths. After that law after law was passed so that by the 1940s there were no sweatshops in the United States. They were completely wiped out because the rule of law was there and unions were organized.

By the 1980s, everything was being outsourced. The law-based model that came out of the Triangle Shirtwaist Fire was completely wiped out, and by 1980 we returned to what it was like in 1911. It’s an enormous problem because every company is going after the cheapest wages they can get. In Bangladesh they have the lowest wages in the world, but because the fire embarrassed Wal-Mart they’re thinking of moving some of the work to Burma, Cambodia and Vietnam — it’s a race to the bottom with no regulations.

Are there any companies that are actually doing a good job of trying to buck the trend and protect worker safety abroad?

Some are better than others. We just did a nasty case in Guatemala involving PVH [the parent company of Calvin Klein and Tommy Hilfiger, among other brands]. Workers were being cheated of their benefits and were not being paid. When we contacted one of the labels, Van Heusen, they took it very seriously. If there are violations, we will bring them into compliance, they said. So there are some labels, like PVH, that if you catch them in sweatshop conditions, they will immediately respond. That’s about as good as we’ve seen.

David Michaels, administrator of the Occupational Safety and Health Administration (OSHA) told GlobalPost that in the US, workplace fatalities have dropped from 38 per day in 1972, to about 13 per day today even though the workplace is twice as big currently. Do you see any similar trends abroad, and is there any hope that workplace fatalities and workplace injuries are decreasing?

Not in the desperately poor countries, like India. They still have not been solving silicosis with their young people [polishing agate stones]. These workers are still abandoned, still dying and not receiving proper medical care.

At the Sensata factory in Freeport, Ill., which was producing for Bain Capital, they brought Chinese engineers to the factory so they could learn how to use the machinery. The first thing the engineers said to the US workers was “the minute we get back to China we will tear off all of the safety guards to improve the productivity.” There are still tons of violations like that in China, with serious poisonings and other horrible human rights violations.