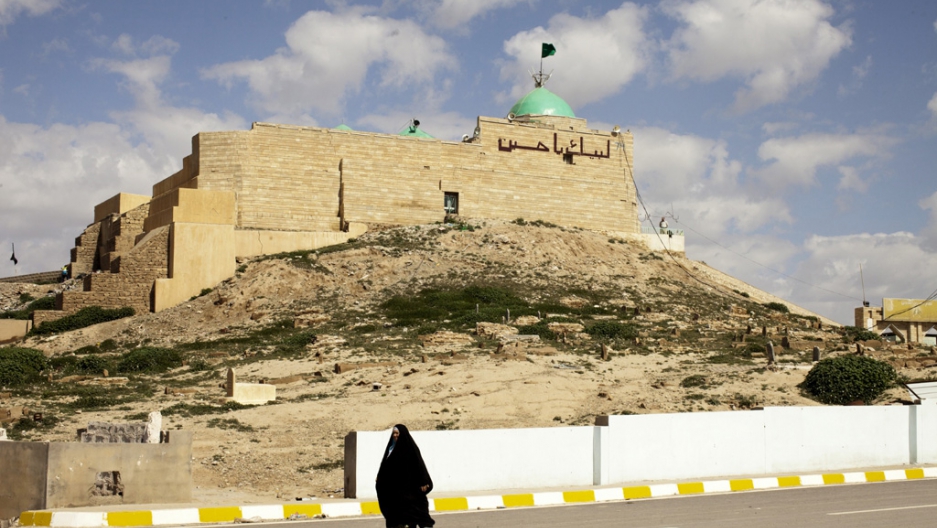 A shrine dedicated to Ali Zein Al-Abdin Al Sajid, the grandson of the Prophet Muhammad and the only suriving son of the Imam Hussein. The site is holy to Shia and other Muslims, because Ali Zein al Abdin is believed to have stopped there with other members of Imam Hussein's family after they were taken into captivity after the battle of Karbala. Pilgrims visit the shrine to pray for miracles.
Credit: Franco Pagetti/VII
Share

American scholar of the Persian Gulf region Joseph Kéchichian — whose analysis is presented in partnership with the USC Annenberg School for Communication and Journalism — details the history of the Sunni-Shia rift in Iraq.

In the aftermath of the US-led 2003 invasion, sectarian violence between Shias and Sunnis escalated, as majority rule ushered forth Shia politicians who exacted revenge for decades of oppression. The violence reached epic proportions by 2007, which sank Iraq into a full-fledged “civil war,” and that continued ever since through near-daily bombings that added to a growing casualty list. At least a million Iraqis died during the past decade with nearly 3 million refugees, both internally displaced or those who fled the country, as a direct result of ongoing sectarian violence.

Among the estimated 32 million Iraqis, minorities represent at least 25 percent of the population, or about 8 million souls. Arabs dominate and the largest non-Arab ethnic group is by far the Kurdish population, estimated at 7 million, followed by Assyrians, Turkmen, Yazidis, Armenians, Cherkess and Persians. There are also smaller communities of Palestinians and Chechens that arrived after 1948 and in the 1980s.

A significant Jewish community, estimated at slightly over 100,000 in 1948, dwindled as a result of massive emigration to Israel.

Despite guaranteed rights and privileges in successive constitutions, and save for Sunni privileges between 1958 and 2003, Iraqis did not enjoy equal status under the law. For over 85 years, Iraqis practiced acute discrimination against each other, as the Arab Socialist Ba‘ath Party (largely between July 1968 and May 2003) spread terror throughout the country.

Oppression of the Shia along with many minorities under the Ba‘ath was only surpassed by its viciousness against Sunni Arabs or Kurds who disagreed with the regime. Under Ba‘athist rule, Iraq, despite boasting a multi-ethnic and multi-religious society, lost its many identities, until the US invasion and occupation that abolished the party.

In elections that followed during the past decade, Shias elected representatives that led Baghdad. A carefully orchestrated balance of power mechanism pretended an aura of equality. But the situation of the Kurds, whose relatively homogenous northern enclaves gained semi-autonomous status, illustrated how weak the political setup was.

Iraq was home to many religious sites important for both Shias and Sunnis, although Baghdad was the capital of the Sunni Abbasid Empire for centuries. A seat of learning and scholarship, the city of Karbala, where the Prophet Muhammad’s grandson Hussein was killed on October 10, A.D. 680 and whose “martyrdom” is commemorated each year during Ashura, retained the aura of a unique pilgrimage site.

Similarly, the city of Najaf was renowned as the site of the tomb of Ali ibn Abi Talib, known as the Imam Ali, considered by Shia to be the righteous caliph and first Imam. Najaf was also a center of Shia learning and included numerous seminaries that graduated thousands of learned men who served throughout the Muslim world.

Kufa was equally important, the home to the famed scholar Abu Hanifah, who established one of the four legal schools of thought in Sunni theology (the Hanafi School). Other religiously significant cities included Samarra, home to the al-Askari Mosque that was bombed on February 22, 2006, when its golden dome was destroyed.

A second bombing occurred on June 13, 2007 that leveled the mosque’s two 10-story minarets, though the mausoleums of the tenth and eleventh Shia Imams were not damaged.

Consequently, and given numerous dedicated religious sites, Iraqi Shia considered the fall of Saddam Hussein as a good omen. After 2003, millions embarked on pilgrimages that were frowned upon by the Ba‘ath regime, as throngs flocked to Najaf, Karbala, and Samarra, among other holy cities, to freely worship what most were routinely denied. Even the Baghdad al-Kadhimiyyah Mosque, which contained the tombs of the seventh and ninth Imams, became a pilgrimage location.

The Shia and the Ba‘ath Regime

Arab nationalism and party politics superseded Shia unity in Iraqi politics as clerics were muzzled or marginalized by Ba‘ath leaders. Politically inactive after 1968, poor Shia masses supported leftist parties, which drew the ire of the Ba‘ath. Consequently, Shias were shunted aside by Baghdad that, in turn, created introversion.

A majority turned to the Ulama (learned religious men) for leadership, as Shia increasingly recorded their disaffections with the Saddam Hussein regime. It was in the 1970s that the al-Dawah (Call) Party first dedicated itself to the establishment of an Islamic state in Iraq that, not surprisingly, frightened Baghdad.

Religious processions in 1974 turned into political protests in several cities, which led to riots that, in turn, saw the regime clamp down. Several Dawah Party members were executed, while Ayatollah Abul Qasim al-Khoei, one of the most influential Twelver Shia Muslim scholars and the predecessor to Ali al-Sistani, was forced to visit Saddam Hussein to mend fences. Executions followed intermittently in 1977 after fresh riots, which eventually led to a further emasculation of the family and, after the 1991 War for Kuwait when Shias rose against Hussein, Abul Qasim al-Khoei was taken to the capital city, forced to make public appearances with Saddam Hussein, before the cleric was allowed to return to Najaf where he died in 1992.

Two of his six sons faced genuine tragedies. Sayyid Muhammad Taqi Al Khoei died in a sudden car accident, allegedly set up by the regime on the night of July 21, 1994 and Sayyid Abdul Majid Al Khoei, then in exile, returned to Baghdad as US forces liberated the city in 2003. He planned to revive Najaf to the glory and splendor it enjoyed under the patronage of his father but was assassinated on April 10, 2003 in Najaf under mysterious circumstances.

These were not the only assassinations. In fact, and in the aftermath of the February 1979 Islamic Revolution in Iran, unrest and repression intensified in Iraq, when the Ba‘ath regime launched an all-out intimidation campaign. The legacy of the times led to the June 1979 murder of Ayatollah Muhammad Baqir al-Sadr, who was apprehended on the pretext of inciting violence and placed under house arrest.

When news of an unverified attempt to assassinate Saddam Hussein was “leaked” in 1980, Sadr was executed, which illustrated the regime’s animosity towards the clergy. A fresh plot was “revealed” in 1982 when the Supreme Council for the Islamic Revolution in Iraq was formed in Tehran, allegedly by an Iraqi-born cleric, later confirmed to be Muhammad Baqir al-Hakim, whose writ was apparently to overthrow the Sunni-dominated Ba‘ath government in Baghdad.

Al-Hakim attempted to unite his group’s efforts with those of al-Da‘wah as well as those of the Jamaat al ‘Ulama (a pro-Khomeini outfit), but did not make much headway on account of strict ethnic divisions.

As these examples illustrate, Saddam Hussein made determined efforts to play ethnic and sectarian divisions, as he wooed support from Iraqi Shia during the eight-year Iran-Iraq War (1980-1988). At the time, he dedicated additional resources to the predominantly Shia-inhabited southern provinces, and Baghdad emphasized Iraq’s Arab identity in its war propaganda.

Iraq contrasted itself with Iran’s Persian distinctiveness, depicting war as a Qadisiyyah, a historical struggle between Muslim Arabs and Sassanid Persians who were Zoroastrians.

Conversely, Tehran used Shia nomenclature in its counter-propaganda initiatives, named its battles after epics like the Battle of Karbala and equipped many of its child-soldiers with Chinese-made plastic keys to open the doors of heaven, the moment they reached paradise.