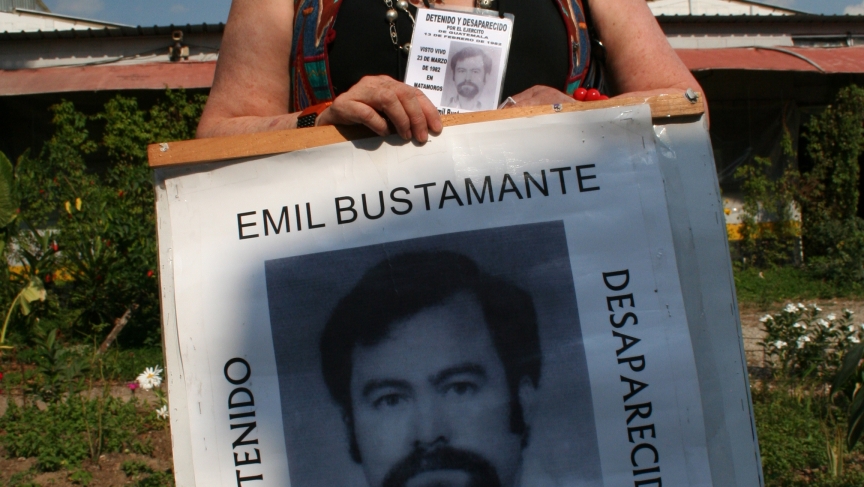 Recent evidence found in secret state documents and uncovered through DNA matches from recovered remains have helped some families find loved ones who were "disappeared" during Guatemala's civil war. (Credit: Jill Replogle)

Guatemala's 36-year-long civil war was one of the bloodiest and most vicious of modern times, pitting state security forces and their allies against leftist rebels. By the war's end in 1996, and in a country one-fourth the size of California, more than 200,000 people were killed or disappeared. But one period was particularly brutal.

In a scene from the documentary "When the Mountains Tremble," filmed in 1982, indigenous Mayan women dressed in hand-woven blouses wail as they look upon a line of corpses, victims of a recent massacre in their remote village.

"I've seen brutality and had to analyze it through these cases in many places in Latin America and other regions, and what happened in Guatemala is very specific in the intensity, the premeditation," said Almudena Bernabeu, a lawyer at the Center for Justice and Accountability, based in San Francisco.

Bernabeu is part of the legal team that has been working for 13 years to bring former President Rios Montt to trial.

After the war, a United Nations truth commission documented more than 600 massacres carried out by the Guatemalan army and its proxies. In some Mayan territories, up to 90 percent of villages were destroyed. A group of survivors and human rights organizations first filed genocide charges against Ríos Montt in Spain. But for years he evaded extradition.

In 2007, Ríos Montt won a seat in the Guatemalan congress. Many hoped the man who once kept savage order would get rid of the gangs and drug lords who were terrorizing everyday citizens. And Ríos Montt continued to wield power in high places, including the courts.

"They didn't want to touch him," Bernabeu said. "Nobody wanted to touch the general."

Until recently, that is. Ríos Montt's congressional term ended in January 2012. Two weeks later, he was indicted for genocide in his home country.

Bernabeu said a lot of things came together to change the aging dictator's fate: an intrepid attorney general, international pressure, and mounting evidence in the form of secret army plans and mass graves, still being unearthed to this day.

Plus, she said, survivors of the genocide have been dogged.

"Guatemalan are quiet, never in your face, never confrontational, but they never stop what they need to do," Bernabeu said.

For a Guatemalan doctor living in the US, it's about time Ríos Montt took the stand.

"It's been nearly three decades, 30 years of waiting for this moment to arrive," said Marvyn Pérez, who lives in Los Angeles. He was among a group of students captured by Guatemalan police shortly after Ríos Montt came to power. They were interrogated and tortured. Pérez was eventually released and his family left for the US a few months later.

Pérez will follow the trial closely, and he added that he is glad to see Ríos Montt and other military leaders get a fair trial.

"Today they have the chance to defend themselves, something they denied to so many people," Pérez said.

The melody of Guatemalan marimba accompanied a recent dinner held in the parking lot of a San Diego apartment complex. A group of Guatemalan ex-pats organized the dinner as a fundraiser to support rural schools back home.

More than one million Guatemalans now live in the US. Thousands of them arrived after fleeing the violence in their home country.

But not all are gripped by the trial of their notorious former president, and some at the dinner barely knew it was happening. Still Alonso Méndez remembered the fear that plagued his country in the 1980s.

"Everyone was scared of the army, of their own president, actually," Méndez said. "The guy who was supposed to defend the country, he's the one people were most afraid of."

Ríos Montt is now 86-years-old. But if convicted, he will not go to jail. Like in much of Latin America, elderly convicts are often put under house arrest. Not exactly a stiff punishment for genocide.

Still, Bernabeu, the lawyer, says the trial itself shows rare judicial power in Guatemala. Of course, she hopes he will be convicted of genocide.

"And then, you know, the sentence, and hopefully they pronounce it with a microphone and with the room packed… "You know, to me, it's the power of that symbol. And that will be there forever."

The trial is expected to last several months.