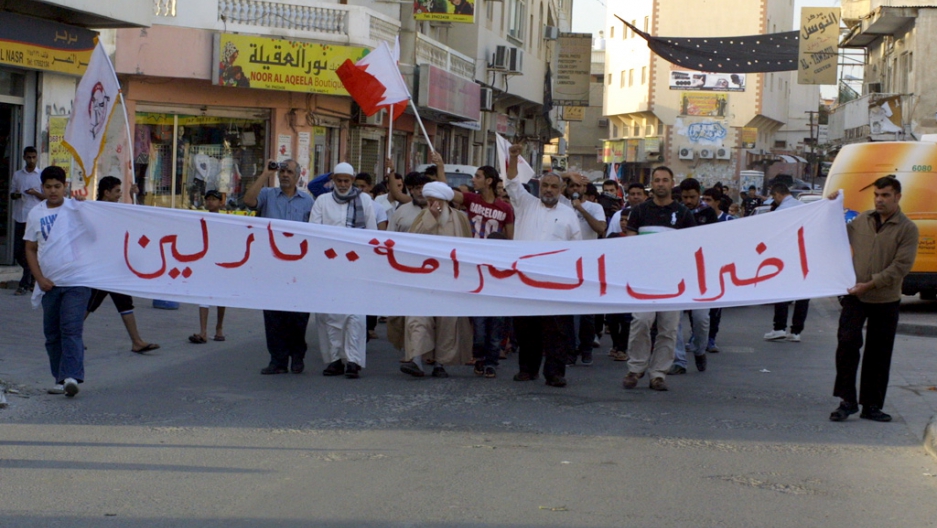 Shia demonstrators protest against discrimination and for democratic rights in Al Daih village. All demonstrations are illegal in Bahrain.
Credit: Reese Erlich
Share

MANAMA, Bahrain — Over the past month, tens of thousands of mostly Shia demonstrations have marched and rallied for democratic rights in Bahrain. The island nation, just east of Saudi Arabia, is home to the longest running Arab Spring uprising. While government opponents tend to be Shia and supporters are Sunni, both sides argue that the fight is not between religious sects.

“It’s a political problem, not a religious problem,” said Dr. Ali Fakhro, former Minister of Education and now a newspaper commentator. “Sunni and Shia have lived in peace for years. There are inter-marriages all over the place.”

When pressed, however, both sides admit the sectarian divide has gotten worse since the uprising began here in February 2011.

Ali, a young anti-government activist who uses only his first name to prevent retaliation, said Sunnis and Shias camped out together in Pearl Square at the beginning of the demonstrations. But over the past two years, he argued, the government has played the religion card to split the movement.

The government falsely claims that Shia protesters are controlled by Iran and want to impose a religious dictatorship on Bahrain, he said. “And it has had an impact.”

“We used to sit at the same table at work, Sunni and Shia,” he said. “We would talk and laugh. Since the crisis people sit at different tables.”

Bahrain is known for mixed marriages, called “sushi,” which combines the first letters of Sunni and Shia. Ali concedes, however, that such relationships are strained as societal conflicts impact even one’s personal life.

These conflicts are a relatively recent development in Bahrain’s history. In the 9th century CE, Bahrain was the first Gulf emirate to adopt Shia Islam. But both Shia and Sunni Islam coexisted for centuries. In 1783 the Sunni Al Khalifa clan became Bahrain’s monarchs.

By the middle of the 19th century, the British recognized the Al Khalifa family as local rulers and Bahrain became a British protectorate. Britain applied the same divide and conquer tactics as it did in other colonies. A Sunni monarchy ruled a Shia majority. Bahrain became independent in 1971.

The 1979 Iranian Revolution against the Shah shook the entire region. It encouraged the Shia of Bahrain to protest their monarchy. Some Bahraini Shia came to espouse the Iranian ideology that religious clerics should also be political rulers.

Then in 2009 millions of Iranians took to the streets to protest their religious government. That reinforced the view of many younger Bahrainis to reject the Iranian model. They want to create a parliamentary system free of religious control.

Meanwhile Bahrain’s King Hamad bin Issa al Khalifa promulgated limited reforms, allowing formation of trade unions,political societies (parties), and an advisory parliament. But none of the reforms changed the condition of Shias as second class citizens. While 70 percent of Bahrain’s citizens are Shia, for example, districts in the new parliament were gerrymandered to create a Sunni majority.

But in numerous interviews with Sunnis, an alternative view emerges. They believe the government’s position that Shias have created the sectarian tension.

For example, they blame Al Wefaq, the main Shia political organization, for driving a wedge between sects by urging boycotts of Sunni businesses. In addition, Sunnis have been victims of violent Shia demonstrations, they argue.

Opposition activists argue that protests usually take place in Shia neighborhoods, and the only Sunnis who might be hurt are police or army units putting down the demonstrations.

The leaders of Sunni political groups have their own explanations of the current unrest. Abdullah al Howaihi, a top leader of the mostly Sunni National Unity Assembly, said Shias face no discrimination in housing and jobs.

He conceded, however, that Shias are seriously under- represented in the military. He then went on to justify the discrimination by claiming Shia were security risks.

“Any country when they put somebody to defend their nation, they must believe in their nationality,” he said. “There is a problem here. You are following whom: the ruler in Bahrain or someone else?” He argued that Shias owe their loyalty to Iran.

Sunni Salafists, the ultra-conservative Islamist trend, attribute Shia disloyalty to the Shia religion itself. Some Salafist clerics don’t even recognize Shia as legitimate Muslims. Adel al Moawda is a self-described Salafist and the number three leader in Bahrain’s lower house of parliament.

“If you go to the [Shia religious] books, there are a lot of very radical verses, [justifying] killing children and even raping,” he said. “It has nothing to do with Islam.”

Shias commit violent acts, he claimed, “but they are not being condemned by their leaders.”

International human rights groups note that Al Wefaq has consistently opposed violence at demonstrations, including the use of Molotov cocktails, which are sometimes thrown by angry youth.

Al Wefaq and five other opposition parties joined in a government sponsored “dialogue” that began in mid-February. The opposition wants fair parliamentary elections, and basic civil liberties such as free assembly, speech and press.

Human Rights Watch recently visited Bahrain and noted that the government has done little to advance the dialogue or meet protesters legitimate demands.

Sarah Leah Whitson, Middle East director at Human Rights Watch, said at a recent Manama press conference, “All the talk of national dialogue and reform mean nothing so long as the country’s most prominent human rights and political activists remain unjustly imprisoned, while officials responsible for torture and murder remain in their positions.”

The success or failure of the dialogue depends in no small part on resolving the Sunni-Shia divide in Bahrain.

Ali Salman, chair of Al Wefaq, said he remained hopeful that Sunnis will eventually join the opposition in larger numbers. “We must continue until we become a democratic country,” he said.

Freelance journalist Reese Erlich’s reports from Bahrain are part of a GlobalPost Special Report on the role of the Sunni/Shia rift in Middle Eastern geopolitics, in partnership with NPR.