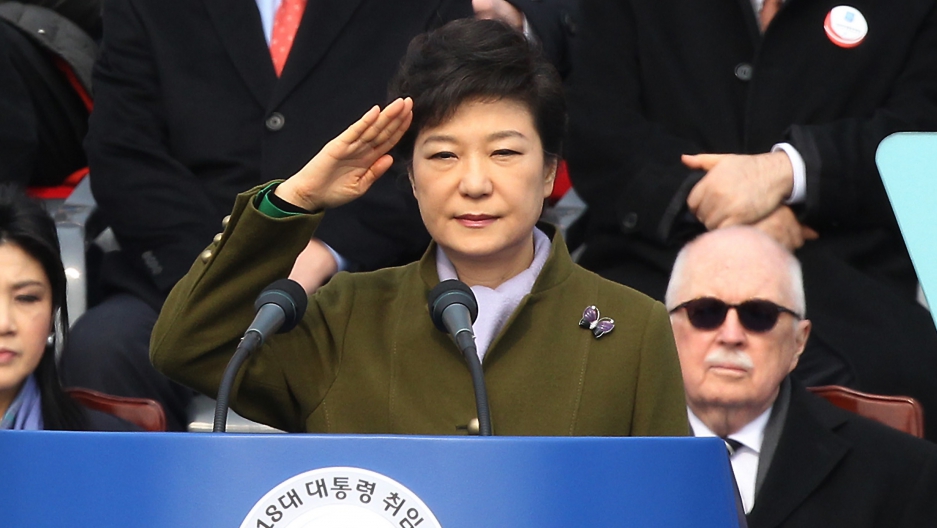 South Korean President Park Geun-hye salutes the crowd during her inauguration ceremony at the National Assembly on Feb. 25, 2013, in Seoul, South Korea. Park was sworn in as the first female president of South Korea.
Credit: Park Jin-Hee Pool
Share

SEOUL, South Korea — From both sides of the Korean Peninsula, South Korea’s first female president, Park Geun-hye, has gotten a baptism by fire since she took office on Feb. 25.

On the one hand, Park is dealing with the much-publicized war threats from North Korea. The Pyongyang regime amplified rhetoric when the United Nations expanded sanctions last week.

On the other, the new president is embroiled in a domestic political quagmire, with parliamentary delays that even she acknowledged last week are “unprecedented.”

Park is struggling with a deadlock in the National Assembly over her bill that would stipulate a sweeping reorganization of government ministries and offices. The left-wing opposition party, the Democratic United Party (DUP), claims the government could use the bill to manipulate broadcasters, although Park’s administration denies the claim.

She has also struggled to appoint a full cabinet the way she wants. On March 4, the nominee for her newly created science ministry — a Korean-American former head of Bell Laboratories — resigned in frustration over the debacle, a blow after the administration made his office a government centerpiece.

“She is in a very difficult position,” said Hahm Chaibong, the president of the Asan Institute, a Seoul-based think-tank. “She is seen by many as very strong-willed, trying to get her own way, and not prone to compromises.”

“At the same time, she is seen as a principled politician, but who sets her mind and doesn’t veer from the course,” he added.

Park’s steely style also appears to be rankling North Korean leaders, who made their first sexist swipe at her this week. On Wednesday, the body that runs the North Korean military complained about the “venomous swish” of her skirt — employing a slang phrase in Korean for overbearing, usually middle-aged women.

“This frenzy kicked up by the South Korean warmongers is in no way irrelevant, with the venomous swish of skirt made by the one who again occupies” the presidential Blue House in Seoul, the statement read in full.

The rhetorical bite came right in the middle of this week’s surge in North Korean shows of force. On Thursday, the state-run Korean Central News Agency (KCNA) reported that Kim Jong Un oversaw live-fire artillery drills near the West Sea, disputed waters off of the peninsula’s west coast.

The country has also threatened “merciless” retaliation in response to ongoing joint military exercises between the United States and South Korea, known as Key Resolve.

Just weeks into her presidency, the bluster could pose an awkward challenge for the Park administration. She campaigned on a platform of "Trustpolitik," pledging to gradually tie up old rifts with North Korea.

Her predecessor from the same conservative party, Lee Myung-bak, oversaw a nadir in relations with the North. In 2008, he halted many aid and exchange programs to Pyongyang, hoping it would give up its nuclear program.

The policy backfired, experts say. Instead, North Korea tested its second nuclear device in 2009 and launched two attacks in the West Sea in 2010.

But despite the bristling from Pyongyang, Park is persisting with calls for smart diplomacy to cool any standoff.

"If we are going to get North Korea to give up its nuclear programs and make the right choice, what is more important than anything else is to cooperate closely with the international community," she said on Tuesday.

In the end, she could be treading the right line when keeping the channels of diplomacy open, say analysts.

“North Korea's unusually high-level brinkmanship is its way of reaching out to Washington, seeking dialogue,” said Sunny Seong-hyon Lee, a Beijing-based non-resident fellow at the Center for Strategic and International Studies.

“Married” to the nation

Park’s complicated past shapes how many South Koreans see her and her leadership style today. She was the daughter of the military dictator Park Chung-hee, who ruled from 1961 to 1979.

Throughout her life, she’s brushed with the North Korean leadership in ways that are both tragic and, some say, offer some hope for her five-year term.

In 1968, a team of North Korean commandos crossed the border and came close to assassinating her father at his residence, the Blue House. Many of them were killed in an ensuing firefight and manhunt.

Then, in 1976, an assassin claiming orders from North Korea tried to shoot the strongman at an Independence Day concert, but missed and killed Park’s mother instead. Park, an engineering student in Paris at the time, was recalled to Seoul, taking the position of first lady.

After the South Korean intelligence chief assassinated her father in 1979, Park left the public eye. She re-emerged in the late 1990s as a member of the National Assembly representing her father’s southeastern stronghold.

In a strange meeting of scions, Kim Jong Il invited Park to Pyongyang in 2002. While dining together, the "Dear Leader" apologized for the attempted assassination of her father in 1968. He said that as children of politics, they’d both have to live up to the legacies of their parents.

Ironically, North Korean elites “love her father,” said Andrei Lankov, a North Korea expert at Kookmin University in Seoul. He said they admire his success as a despot who built a modern nation from the poverty after the Korean War of 1950 to 1953.

Citing her life story, the unmarried Park has proclaimed that she is married to the nation. It is a double-edged worldview, one that has shown her as both principled but, some complain, too uncompromising in her country’s raucous politics.