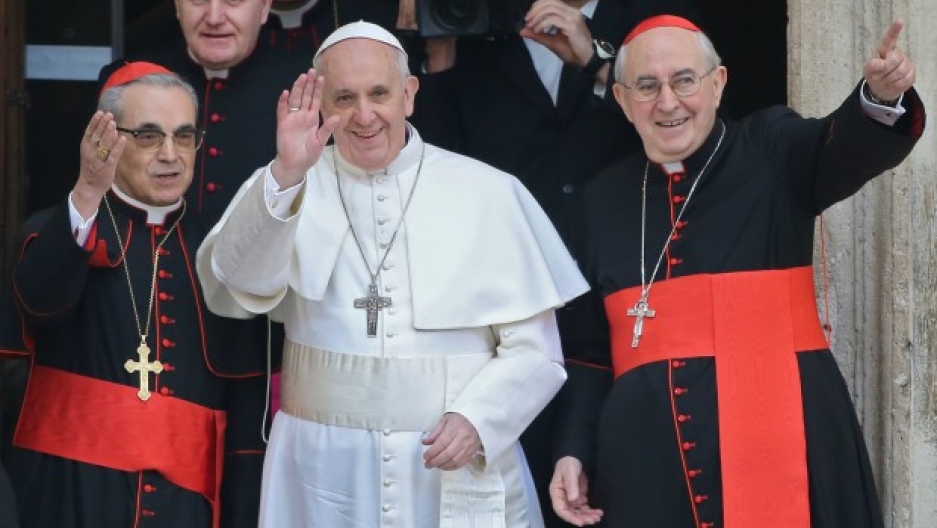 Newly elected Pope Francis leaves after praying at a church in Rome. (Photo by Alessandro Bianchi/Reuters.)

As word spread about the new pope, many Latino Catholics in the United States celebrated the historic choice of a pontiff from Argentina.

But it is also clear that, just like in Latin America, the Catholic monopoly over Latin America immigrants is shrinking, especially as evangelical churches and Pentecostal congregations rise.

“Un papa latino!” she said, thrilled about the Vatican’s choice.

At last, she said, Latin America, the world’s Catholic stronghold, has its own pope.

Veliz is from Nicaragua and lives in San Francisco’s Latino-heavy Mission District. She assumed the next pope would probably be European or African. So when news broke that Argentina’s Cardinal Jorge Mario Bergoglio would become “Papa Francisco,” as he is known in Spanish, she rushed down to her neighborhood church.

For years, Veliz has worked to bring in new Catholics to her local church, going door to door, “hoping to revive our faith,” which is steadily losing ground in the United States.

Also outside the church was Juan María Antillón, a deacon who hails from Chihuahua, Mexico. He liked what he had heard so far about Pope Francis.

“He seems like a humble pope, a very common man,” Antillón said.

It’s also meaningful to Antillón that the pope’s new name honors St. Francis of Assisi. Sure, it’s San Francisco’s patron saint. But St. Francis was also the one called by Jesus to rebuild a crumbling church. And it still needs work today, says Antillón.

“People are more secular, converted by the outside world or what’s on television,” Antillón said.

Recruitment won’t be easy. A cluster of young teenagers outside the church had just attended mass in Spanish. Yet talk among them did not reflect a rock-solid commitment. Yvette Corral, 16, shrugged when asked what motivated her to go to church. She looked to her 17-year-old brother, Armando, for an answer.

“Yeah, why is it important Armando?” she asked.

“Er, we were raised like that,” Armando said, more a question than an answer. “People should practice [being] Catholic more? I don’t know.”

The siblings added that it was important to their parents, from Mexico, to attend mass. The teenagers also talked about their friends — who have either left Catholicism altogether or joined other religious groups.

“Only a few are Catholic and the rest are Christian,” said Armando, referring to evangelicals. “I don’t mind. If they believe in God and they’re Christian, I’m OK with that.”

In the immediate area around the Catholic church, there is no shortage of large evangelical churches, along with Pentecostal storefront temples. Fluorescent lights advertise in Spanish.

Some Catholics tag diehard evangelicals as “los aleluyas,” or the Hallelujahs. But that doesn't bother evangelical converts like Víctor Manuel Frías.

Frías says a Catholic mass is too stiff, with an excess of repeating what people say on stage.

“I don’t like that. That’s not cool,” Frías said. “I mean, I’m not saying it’s bad. Who am I to judge, right? But I like to worship. I like to be able to praise God, raise my hands to him and give my heart. It’s awesome. It’s an awesome feeling.”

Clearly, Pope Francis faces plenty of challenges. But Wednesday was still time to celebrate. Inside the Catholic Church, Dolores Contreras, the parish cook, was overwhelmed. She's from Argentina and sat in a pew holding a small Argentine flag.

“Yo soy de Argentina!” she exclaimed.

Her voice broke with emotion as she explained that the new pope didn't just trigger national pride, but rather recognition of Latin America’s Catholics.

“God has given us a prize,” she said. “I just hope that this pope can bring more peace to the world and help strengthen our own faith.”