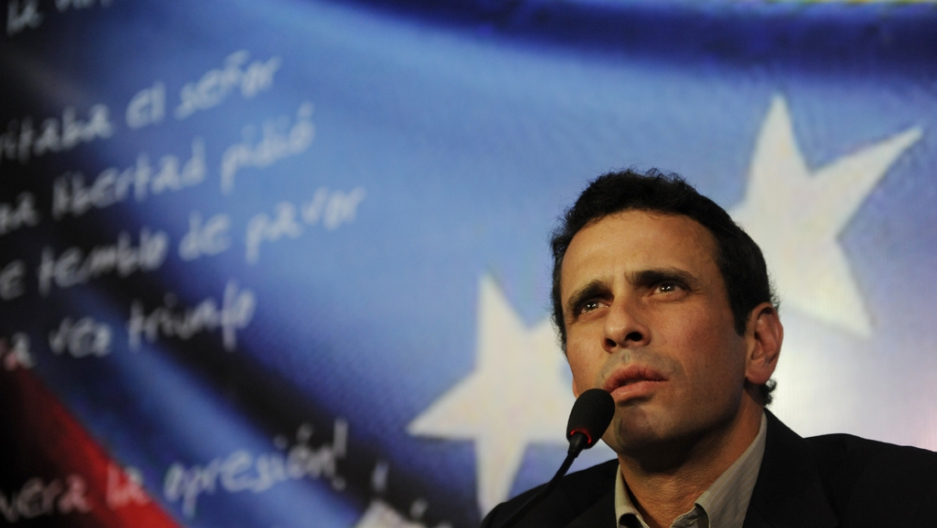 Editor's Note: This article has been updated with news about possibly botched plans to embalm Hugo Chavez.

CARACAS, Venezuela — “Nicolas, you are using the body of Chavez for political campaigning,” said Henrique Capriles Radonski, Venezuela’s opposition leader who in one month will face acting President Nicolas Maduro in a presidential election.

He was speaking on Sunday to confirm his spot on the ballot, which was called after the death of his rival Hugo Chavez.

“April 14 is the day of [Chavez’s] resurrection,” Maduro, 50, said of election day. Over his shoulder was a photo of the former president — a figure whom Maduro has sought to emulate and has appeared to exalt to near sainthood. “Our father is Hugo Chavez.”

Even as his corpse lies in state, Chavez appears to be owning the upcoming presidential election to replace him. His idolized image will be key in a widely predicted win for Maduro. Analysts say Capriles, meanwhile, must convince voters they're not casting a ballot for Chavez, rather a poor imitation.

“The campaign we’re going to see from Maduro is absolutely connected to Chavez, his symbol and image,” Luis Vicente Leon, a Caracas pollster, wrote on his blog.

At 40, Capriles garnered much global media attention for his youth and energy last year while campaigning hard against 58-year-old Chavez, who had been noticeably weakened, even if claiming to be free from cancer.

Capriles lost to Chavez by 11 percentage points in October, a considerable margin but still the closest an opposition candidate had come to unseating El Comandante.

Now, he's running once again, and the task could not seem greater. Experts advise that, if he can't remove Chavez from the equation entirely, he should work to limit the dead leader's boosting effect on his preferred heir.

“Capriles must demonstrate the gap between Chavez and Maduro,” Leon wrote. “He has to show the electorate that Maduro isn’t Chavez and ensure they don’t get tangled up with the idea that a vote for Maduro is a vote for Chavez.”

Capriles appears to understand this — and he has taken pains to spell it right out.

“This is an election between Maduro and Capriles,” the underdog opponent said Sunday.

He has had to take on a mantra that could make for an awkward campaign platform: “Maduro is not Chavez.”

Shoring up support among the opposition is another challenge. Capriles is working not only to defeat an entrenched "Chavista" (pro-Chavez) establishment, but also to unify a fragile alliance of opposition groups. The traditionally divided opposition joined to back him before, but began to fray once he lost October's vote, and tore further apart after losing key posts to the socialists in December's debilitating regional elections.

The opposition’s fringes have pushed to replace Capriles, but the majority sees him as the only hope against Chavismo.

This drama has played out amid other notable distractions — some of them perhaps seeming strange to those unfamiliar with Venezuelan politics.

Maduro said officials will investigate a theory, once raised by the Comandante himself, that "Chavez was poisoned by dark forces that wanted him out of the way."

That kind of suspicion of plotting led Venezuela to expel two US Embassy officials on the morning of the news of Chavez's death. In a tit-for-tat, the US State Department said Monday it had taken "reciprocal action" and kicked out two Venezuelan diplomats.

Critics blame Venezuela's government for withholding key information about Chavez — who for months was absent from the public eye while undergoing treatment in Cuba — never even specifying what form of cancer he suffered from. That fueled a rumor mill churning out a gamut of theories about the vanished Comandante, who had once been so outspoken and nearly omnipresent in Venezuela.

Capriles accuses the government of manipulating the facts about Chavez’s death for political gain. “Who knows when Chavez really died?” he said.

The details may not matter as much to some. One poll, taken in February before Chavez's death, favored Maduro to beat Capriles in an eventual race 50 percent to 35 percent. However, many question the methods and possible biases behind Venezuelan polls.

At the time of the poll, Chavez's death or a new election were not certain. But just two months prior, before leaving for a fourth cancer operation in Havana, the ailing leader appointed Maduro his successor, which some took as a sign Chavez would soon lose his nearly two-year battle with cancer.

For many Venezuelans, that appointment holds deep meaning and importance.

Noriela Muñoz, 38, was among the millions of Chavez supporters lining up to catch a final glimpse of him last week. “I’ll be with Maduro until the end,” she said. “Because Chavez said so.”

Many Chavez supporters echo that sentiment; however, it appears a faction is not so supportive of Maduro, a former bus driver and union organizer.

“We love Chavez,” reads a piece of graffiti in downtown Caracas. But, “Maduro lied to us.”

On Twitter, a bedrock of political discourse in Venezuela, opposition supporters have been promoting tweets by “Chavistas” who are not supporting Maduro.

“I’ll be a Chavista until I die,” wrote Rafael Emilio Garcia on the social network, “but I won’t vote for Maduro.”

To many adoring Venezuelans, Chavez was always the rock star president, commanding a religious passion from his supporters with unmatched force of personality and charisma. Despite being his faithful deputy, Maduro it seems is struggling to muster the same mojo.

Observers say Capriles will have to channel his fight toward Maduro, while maintaining respect for the beloved former president. He would not want to lose again by alienating supporters of Chavez — especially those who are not so sure about Maduro.

The campaign can only officially begin 12 days before the election. Many expect that rule, though, will be ignored by both sides. Capriles said on Sunday that the government has “coldly calculated” the entire timetable, including Chavez’s funeral, and that it has already been campaigning for weeks.

“The funeral was part of the election campaign,” said Leon.

Indeed, the Supreme Court announced during Friday’s state funeral that Maduro would be allowed to govern as acting president and run in the election at the same time. Normally Venezuelan politicians must leave their post while running for president.

The ruling prompted a tweet from Capriles — who must step down as governor — calling the decision fraudulent.

For several days the candidates have exchanged barbs on national television. “You wretched loser,” said Maduro of Capriles — and other mudslinging typical of last year’s election campaign.

Meanwhile, hundreds of thousands continue to pour past Chavez’s coffin to bid farewell, according to the government.

More from GlobalPost: From the coffin, Chavez beckons "Cry for me, Venezuela"

State television is airing images of the long lines as well as Chavez in his earlier, extremely popular years.

Maduro had said Chavez’s body would be embalmed for "an eternity" of public viewing — like Ho Chi Minh, Lenin and Mao.

However, on Wednesday, Maduro said Russian and German experts broke the news that an embalming process was unlikely "because the preparations needed to be started ... much sooner."

Lawmakers were expected to debate whether Chavez’s body should be moved to the country’s National Pantheon for permanent display.

The 170-foot-high brilliant white structure, shaped like a ramp leading to a convex wall, was built last year to house the remains of Simon Bolivar, the Latin American independence hero idolized by Chavez’s Bolivarian Revolution.

Even as it was being built, many opposed to Chavez suspected that the then president’s remains would end up there.

"It's Chavez's future mausoleum," Jose Jimenez, a 42-year-old accounting teacher at a local university, told GlobalPost in June. "They are pushing for his remains to lie next to Bolivar, to put Chavez's legacy next to that of Bolivar."