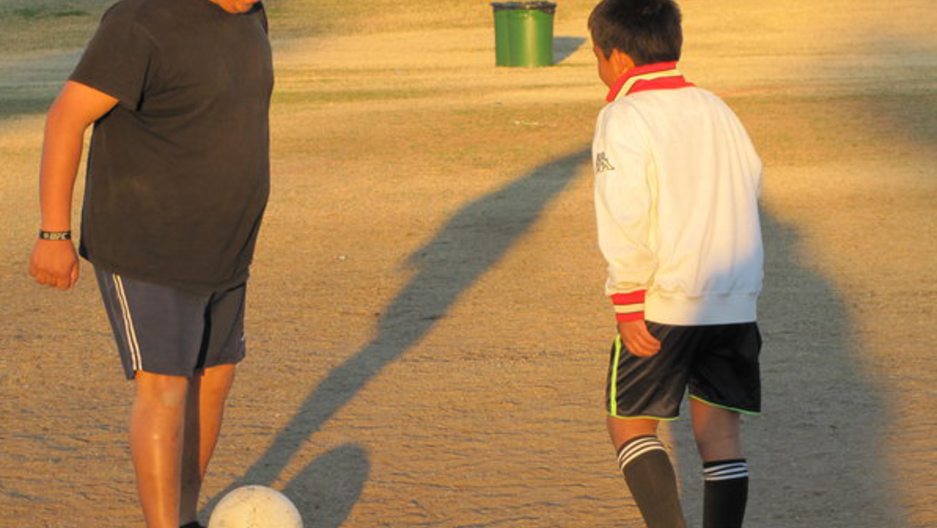 Miguel Vázquez, left, the coach of Phoenix's Team Milan, was brought to the United States by his family when he was 7. He remains an undocumented immigrant. (Photo by Valeria Fernández.)

Editor's Note: This story was produced as part of the Feet in Two Worlds project.

In Phoenix, there's a soccer club called Team Milan made up of kids, refugees, from all over the world: Burma, Congo, Iraq, Afghanistan and more.

Turns out, Phoenix accepts more refugees than nearly any other American city. And the team’s coaches? They’ve resettled in the United States too, but are undocumented immigrants from Mexico. They all find common ground on the field.

Miguel Vázquez is shy about his English accent, but when it comes to being a soccer coach he is never at a loss for words. On a recent afternoon, he pumps up his players minutes before a game.

“Listen up, we’re going to win this game! We are going to play hard!” he said.

His players are refugee children, ages 11 to 13. They call themselves Team Milan, after Italy’s famous club. Vázquez recognizes that, for many of his players, this team has meant being on a soccer field for the first time. Many of the players spent years in refugee camps before arriving to the United States.

“They’ve never touched a soccer ball before, so when they come here, they’re having a lot of fun,” Vázquez said.

The enthusiastic players remind Vázquez of his first years in America. His family brought him across the U.S.-Mexican border by foot when he was seven. But he also says these young refugees’ stories are often harsher than his own.

“These kids suffer more than an immigrant because they come from poverty and violence and many times they have needed to hide themselves from soldiers who could kill them if they felt like it,” Vázquez said.

For the past few years, Vázquez and his wife, Alondra, have served as Team Milan’s volunteer coaches. Both are undocumented immigrants from Mexico. In Arizona, they face strict immigration laws and have experienced harsh judgment. And yet, Phoenix takes in more refugees than nearly any other American city.

But the difference in legal treatment between refugees and undocumented immigrants, and the increasingly heated debate about immigration policy overall, washes away when this group gets together. The focus is on helping these kids fit into their new home.

The bonds form off the field, too. The team, which is largely supported by the North Phoenix Christian Soccer Club, also bands together for carwashes to help raise cash to pay for extra costs like tournament fees, uniforms and shoes — things the kids’ parents can’t afford.

At a recent fundraiser, Rafea Kareem, a 12-year-old from Iraq, introduced his teammates — with names reflecting their varied backgrounds.

Once the cash they’ve raised is counted, assistant coach Alondra Vázquez drives the players to a picnic. She has an old Arizona license, from before the state stopped issuing them to undocumented immigrants.

“Helping with the soccer is like a relief for us, it’s like freedom in a way,” Vázquez said. “It makes us feel like we’re living normal.”

Vázquez says she feels valued working with the team. And when she thinks about the challenges these young refugees have faced, it makes her own troubles, about paying rent by cleaning houses, seem small. One of the players, she says, shares one pair of shoes with all his brothers.

“My husband is like, ‘We have to buy the kid shoes,’” she said. “And here we are struggling to pay our bills and my husband wants to buy shoes for the kids.”

Sometimes Vázquez is the only person cheering on the players during their matches. Their parents are typically working during game time.

She also supports the players off the field.

Every evening, Vázquez stops by the home of one of the team’s players. His name is Pleh Reh. His family, his sisters, his parents, are all in Phoenix now after fleeing Burma. Vázquez often helps one of Pleh Reh’s sisters, Poe, who is 16, with her homework. A mentor-mentee relationship has evolved.

Vázquez has taken Poe to tour a nearby university, helped her enroll in a charter school. And Vázquez works with Poe on her English. It’s important, because Poe often translates for her father, who only speaks Karenni.

Poe asks her dad, Tau Reh, what he thinks about the legal differences between him as a refugee and coach Vázquez, who could be deported at any time. Tau Reh tells his daughter that it is people like Alondra and Miguel Vázquez who are helping his family feel at home in America.

He said he doesn't fault immigrants for crossing the border illegally. They have all migrated to improve their lives.