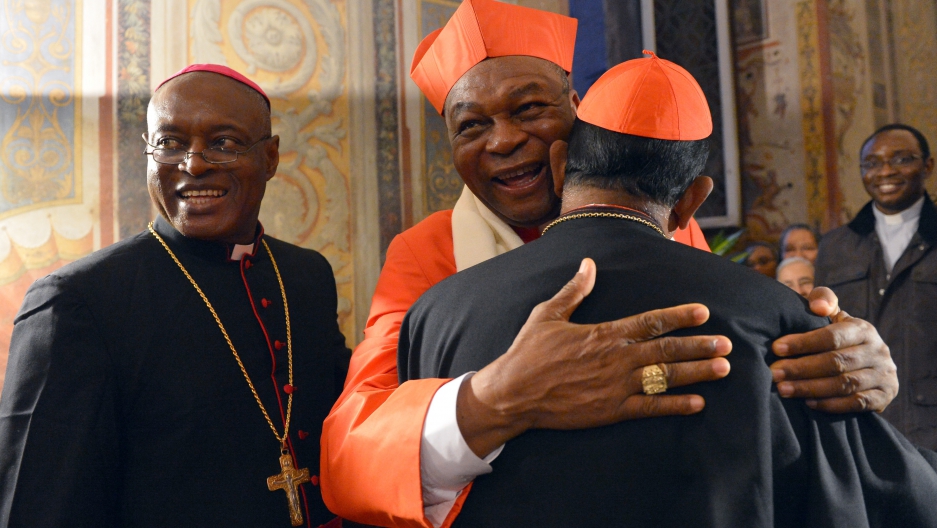 Nigerian cardinal John Onaiyekan (C) greets visitors druing the courtesy visit after being appointed by the pontif on November 24, 2012 at the Apostolico Palace at the Vatican. Six non-European prelates are set to join the Catholic Church's College of Cardinals, a move welcomed by critics concerned that the body which will elect the future pope is too Eurocentric.
Credit: Vincenzo Pinto
Share

ABUJA, Nigeria — As other parishioners filed out of the Mass behind her Friday, Felecitas Olajide paused and flicked off her small lace veil — a garment she says is not compulsory for the faithful here, but tradition.

Olajide, a Catholic, looked surprised when asked how she has time to attend Mass seven days a week.

Olajide is not unusual in her devotion here in Nigeria, as crowds of worshippers pour into churches and mosques daily in this deeply religious country — home to Africa’s single largest Catholic population that is part of an increasingly global church whose leadership does not yet reflect its diversity.

Nigerian clerics say they look to Rome for guidance in all matters. With the world’s cardinals assembled there to elect a new pope, Catholic leaders in Nigeria say they are hoping the next man in charge holds on to conservative values, despite pressure from an increasingly liberal world.

“We know that there have been agitations from all over the world that the church should change in the light of the new thinking,” said Reverend Father Ojaje Idoko, the director of pastoral affairs at the Catholic Secretariat of Nigeria while sitting on a wooden bench after the Friday mass. He dabbed his face with a handkerchief, having just spent almost an hour celebrating Mass for about 100 in crowded room in the height of Nigeria’s hot season.

The Catholic Church has been criticized for its strong stance against homosexuality, euthanasia, abortion, stem cell research and contraception, among other things. But Idoko said on these issues, the church should ignore the chorus of complaints and remain steadfast.

“There are certain things the world cannot teach the church,” he said. “The church needs to teach the world.”

While certainly Catholic, Idoko’s perspective is also particularly Nigerian. Nigeria has an extremely structured society, and locals give great deference to authority. People of all faiths seek guidance from religious leaders, who are often far more conservative than their Western counterparts on controversial social issues.

Outside another church after attending Mass on a Wednesday afternoon, Fola Atolagbe, a water resources consultant, said Western perspectives shouldn’t shape the church’s thinking because churches in Europe and the US are struggling to hold onto their flock, while African churches cannot ordain enough priests to keep up with the growing demand.

“In the UK and the US people used to go to church a lot,” he said. “But nowadays, you rarely find people there, except for very old people. They don’t go there.”

Catholic Church membership in the US declined 5 percent between 2000 and 2010 leaving the country with roughly 68.3 million Catholics, according to Association of Religion Data Archives information. Nearly half of all Americans consider themselves unaffiliated with any organized religion.

In Nigeria, Africa’s most populous country, that number is less than 2 percent. The population is roughly evenly divided between Muslims and Christians, with about 20 million Catholics. Priests say the number of Catholics is growing fast.

Africa is expected to be home to one-sixth of the world’s Catholics by 2025. That’s about 230 million people. In the second half of the 20th century, Catholic membership in Africa grew from about 1.9 million to about 160 million people, the result of aggressive expansion by church leadership — particularly Pope John Paul II — and a receptive environment in societies where moral authority is often difficult to find in government.

Despite these numbers, many Nigerians say after Pope Benedict XVI’s retirement last month, the new pope’s primary duty will be to grow the church. Nigeria’s Catholic churches compete for membership with other churches, including the rapidly expanding evangelical Christian movement.

“We need more priests. We can never have enough,” said Atolagbe as he left the Wednesday Mass. “When we behave like Christians, we are [preaching the gospel]. Then we are winning more souls.”

Long gone are days when foreigners came to Nigeria to teach Catholicism, said Reverend Father Zacharia Nyantiso Samjumi, the director of the Pastoral Agents Department of the Catholic Secretariat of Nigeria. The church here now exports priests, dispatching them to minister and study around the world.

“Their congregation is meant to shoot out, to go out and to go to the missions in some of these Africa countries [and] Europe, America, Oceania and in fact the wider world,” he said in a garden outside his office.

Among Nigerian clerics abroad, is Cardinal Francis Arinze, currently in Rome attending the conclave, the ultra-secret meeting in which the next pope is elected. Arinze was considered a contender for pope in 2005, when Benedict was elected, and he is now one of two African cardinals who observers speculate to be in the running.

Many priests in Nigeria welcomed Benedict’s resignation in early February, saying if his age was keeping him from his duties, he was doing the world a kindness by stepping down.

Father Olajide, still sweating after the Friday Mass in the climbing afternoon temperatures, said he hopes the next pope will be more active and spend more time in Africa, like John Paul who visited Nigeria twice during his 27-year tenure.

“We look forward to having a less bureaucratic pope,” he said. “Somebody like John Paul who will get the message out. Not one who will sit in Rome so everyone comes to see him.”

Olajide smiled sheepishly when recalling the first time he saw John Paul in Nigeria, back in 1982. He was 15 years old at the time, and one of 44 students chosen to see the pontiff speak. When the pope declared, “God bless Nigeria,” he says, the crowd went wild.

“It was electrifying. People shouted, ‘wahoo!’” he said, still sounding excited. “It wasn’t so much what he said, than what he was.”

Nigerian clergy say they are not advocating for a particular cardinal to become pope because the choice is said to belong to God, not man.

But Father Samjumi grins at the idea of a Nigerian pope, saying maybe it would be just a little bit cool.

“Whoever that is chosen, thanks be to God,” he said. “But if it happens to be one of us? More glory, more dancing.”