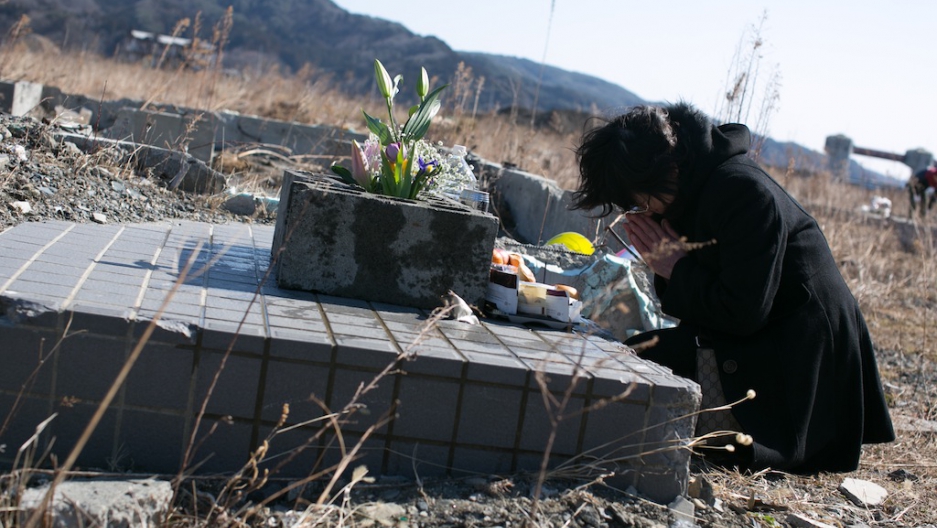 A woman prays for her family where her house used to stand on March 11, 2013 in Ootsuti, Iwate prefecture, Japan.
Credit: Ken Ishii
Share

TOKYO, Japan — People across Japan fell silent on Monday as the country marked two years to the day since its northeast coast was struck by one of the most powerful earthquakes in recorded history, setting off a tsunami that killed almost 16,000 and left more than 2,600 others missing.

At 2:46 p.m., the time the quake struck, survivors bowed and remembered relatives and friends who perished in locations that will forever be synonymous with the destructive force of the ocean: Kesennuma, Otsuchi, Ishinomaki and Fukushima, where the waves sparked a nuclear meltdown and rendered entire communities uninhabitable.

In Tokyo, Emperor Akihito, who made a rare appearance at the height of the crisis to encourage a traumatized nation, returned to his theme of hope in a short address to 1,200 people packed into the capital’s National Theater.

With the empress, Michiko, by his side, he said: “We feel, with renewed resolve, that it is important for all of us to continue to watch over people and to share in their grief.

"I pray that the peaceful lives of those affected can resume as soon as possible.”

The ceremonies were an opportunity to mourn the dead and the missing, but the grief was tinged with frustration that, in the three badly damaged prefectures of Iwate, Miyagi and Fukushima, tens of thousands still have no permanent home.

According to official data, about 315,000 people still live in temporary accommodation, while only 10 percent of permanent housing planned for the region has been completed.

The dearth of space on higher land overlooking the tsunami-flattened towns is the biggest obstacle to rebuilding, exacerbated by bureaucratic bungling, misspent reconstruction funds and the sense, among survivors at least, that the rest of the country is moving on.

GlobalPost in-depth: After the tsunami

The earthquake, so powerful it was "heard" by an orbiting satellite 260 kilometers above Earth, destroyed or damaged 400,000 homes and other buildings.

Prime Minister Shinzo Abe vowed to speed up reconstruction, and implored the country to draw on the strength of previous generations of Japanese in times of adversity.

“Our ancestors have overcome many difficulties and each time emerged stronger," he said. “We pledge anew to learn from them and move forward, hand in hand."

Abe’s government faces an unenviable task. Almost all of the 27 million tons of debris created by the tsunami, which reached up to 30 meters in height, has been cleared, creating barren landscapes now blanketed in grass, weeds, and on a chilly March day, a light covering of snow.

But plans to raise the land near the sea by up to 20 meters and use it to build stores and other businesses, while reserving scarce plots on higher ground for schools, hospitals and homes will be costly and time-consuming.

In response, Abe said he would raise the long-term reconstruction budget from $200 billion to around $260 billion.

"Japan will never experience a true spring if spring does not come to northeastern Japan," he said. "I promise never to forget the weight of each day and to speed up the reconstruction of the region. I will make Japan a country resilient to disasters, and stand with the people who were affected."

In Fukushima, about 57,000 people who fled their homes have not returned to the prefecture, while 100,000 others live in limbo in safer parts of the region. The decontamination effort is well behind schedule, while life in cramped temporary shelters is beginning to take its toll on the physical and mental health of nuclear evacuees.

"Families and communities are breaking up, some are in financial ruin and the divorces and mental breakdowns are mounting. The companies that caused this nuclear crisis must be held fully responsible," Kumi Naidoo, executive director of Greenpeace, said in a statement.

On Monday, 800 people in Fukushima filed a lawsuit against the plant’s operator, Tokyo Electric Power (TEPCO), demanding a payment of 50,000 yen a month each until radiation is brought down to normal levels — an operation that the authorities admit could take decades.