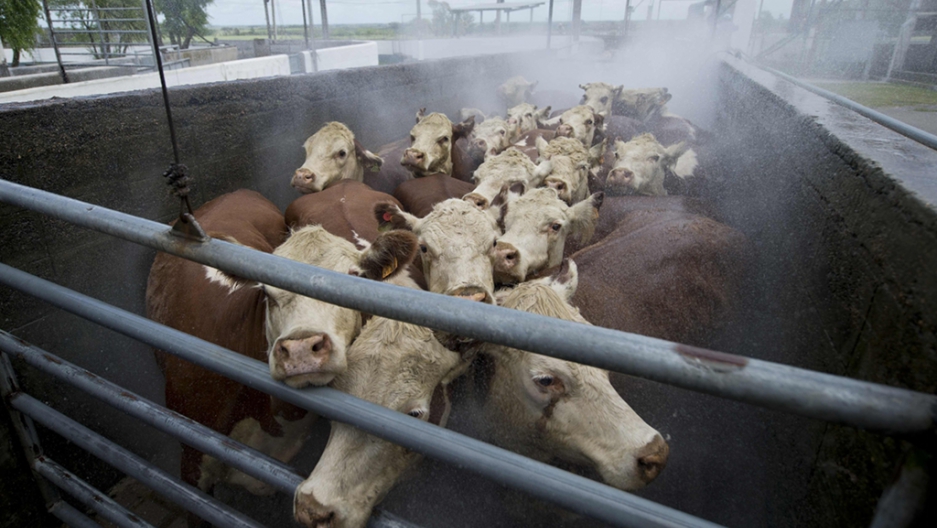 Cows are washed before entering the slaughterhouse of the Frigorifico in Canelones, Uruguay. Synthetic meat would sidestep many of the environmentally taxing processes behind factory farming, which generates huge amounts of greenhouse gases and waste.
Credit: Pablo Porciuncula
Share

AMSTERDAM, Netherlands  —  The race to create edible, lab-generated meat hit a significant finish line on Monday, when a high-profile launch in London unveilled a 5-oz. test-tube-grown beef burger made from thousands of protein strands.

The cost for Dutch scientists to make the test tube burger came at a neat $325,000 — paid for thanks to Google co-founder Sergey Brin.

So, how does it taste?

Mark Post, the synthetic beef mastermind, has suggested the burger he's grown could be "flame grilled" by Heston Blumenthal, the three-star chef whose application of food science has led to dishes like snail porridge, and bacon and egg ice cream.

Alternatively, Post once told the BBC: "It would be great if someone like Jamie Oliver agreed to cook it for us, and a famous actress ate it."

There is method behind the moves to launch the lab-grown meat with a media mega-splash.

By securing celebrity endorsement, Post hopes to convince the public — and investors — that the in vitro burger is not a gastronomic gimmick but a serious response to ethical, nutritional and environmental challenges on a global scale.

"Right now, we are using more than 50 per cent of all our agricultural land for livestock. It's simple maths. We have to come up with alternatives. If we don’t do anything, meat will become a luxury food and be very, very expensive.”

The UN's World Health Organization estimates global demand for meat will double in the next 40 years. With so much farmland already used for meat production, and with cattle consuming 10 percent of the world's fresh water supplies, campaigners say conventional animal raising is unsustainable.

Meat production is also blamed for making a major contribution to global warming, through methane released by flatulent animals, and by the decaying remains of crops needed to feed livestock. A Dutch study has claimed switching to a low meat diet could cut the cost of fighting climate change by $20 trillion up to 2050.

Supporters of the lab-cultured burger say the development of commercially viable in vitro meat production could bring similar savings without anybody having to give up meat. In fact even vegetarians would be able to eat burgers, steaks or chicken breasts grown from stem cells without the need to slaughter animals.

"The meat labs would use only 1 percent of the land and 4 percent of the water associated with conventional meat, and greenhouse gases would be reduced by up to 96 percent in comparison to raising animals," says the website of the Amsterdam-based Next Nature Foundation. "Lab-grown meat should also provide cheap nutrition and help improve animal welfare as millions of people in rapidly emerging economies such as China and India are rising from poverty and become able to afford more meat in their diets."

Several labs around the world are working to develop cultured meat, and the animal rights organization People for the Ethical Treatment of Animals (PETA) has offered a $1 million reward for the first commercially viable creator of test-tube chicken meat.

The idea is not new. Winston Churchill in 1932, wrote: "50 years hence, we shall escape the absurdity of growing a whole chicken in order to eat the breast or wing, by growing these parts separately under a suitable medium."

Post's lab at the University of Maastricht takes muscle stem cells from living cattle through biopsy. The cells are then "exercised" by being stretched between velco anchor points as it tries to contract they grow and reproduce to build up bulk, like a microscopic version of a bicep pumping iron.

After a few weeks they develop into strips of wobbly white matter about an inch long. A year ago, Post invited reporters into the lab to announce that the unappetizing slivers in his Petri dishes would be turned into a tasty burger ready for the grill by the end of 2012.

That did not happen. Although a burger was grown, Post was reportedly unsatisfied with the texture and taste. An improved version is now expected to be unveiled at the London launch, possibly in April.

However tasty the patty, proponents of cultured-beef will still face two major challenges: turning the science into a viable commercial operation, and persuading people to eat the stuff.

Dr. Koert van Mensvoort runs the Next Nature Foundation and heads a team at the Eindhoven University of Technology which is working with Post to examine how the lab meat could be used as a food of the future.

Although some have denounced the in vitro meat as artificial "franken-foods," van Mensvoort says there is little alternative in the long term — unless we want diets dominated by beans and bugs.

"People say they don't want in vitro meat because its artificial. Then they walk into a supermarket and buy square cubes of chicken," he told GlobalPost.

"The way we produce meat today is unsustainable. There are basically three options for the future: one is that we will all be vegetarians, eating rice and beans; another option is people start to eat other protein sources, like insects; the third option is in vitro meat grown without having to kill an animal."

The first burger will have cost an estimated $300,000 to produce, but Post is confident that after he has proved the technique works, it could be adapted for mass production in the next 20 years.

By removing animal death and suffering from the food production process and eventually providing healthy, tasty and sustainable meat, supporters of the idea say consumers will warm to the idea.

Dr. Kurt Schmidinger, an Austrian food scientist who promotes in vitro meat through the website futurefood.org says investors in lab-grown meat could tap into the $250 billion world meat market.

"Cultured meat could capture a vast future market," says the site. "It has so many advantages, you probably cannot stop it. There are ethical, health, environmental advantages. We cannot go on the way we are, one-third of the global harvest of cereals and soy is converted into excrement. It's an illusion to think we can go on like this.