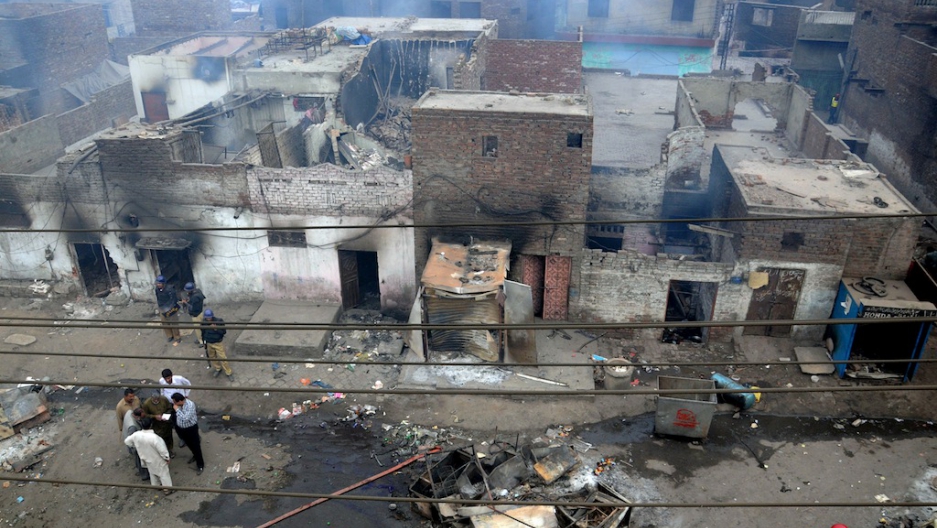 Pakistani police officials examine the burnt out houses of members of the Christian community attacked by Muslim demonstrators during a protest over alleged blasphemous remarks by a Christian in a Christian neighborhood in Badami Bagh area of Lahore on March 9, 2013. Thousands of angry protestors on March 9 set ablaze more than 100 houses of Pakistani Christians over a blasphemy row in the eastern city of Lahore, officials said. Over 3,000 Muslim protestors turned violent over derogatory remarks allegedly made by a young Christian, Sawan Masih, 28 against Prophet Muhammad in a Christian neighboorhood in Badami Bagh area.
Credit: ARIF ALI
Share

The Christian neighborhood of Joseph Colony in Lahore, Pakistan was attacked on Saturday after a Christian sanitation worker allegedly blasphemed the Prophet Mohammed.

Several thousand people armed with batons and pistols set fire to houses and churches on Saturday morning, according to the New York Times.

178 houses, 18 shops and 2 churches were damaged by fires, the Times reported.

Several policemen were hurt as they tried to intervene.

“They vandalized Christians’ houses, desecrated churches and opened fire on the police,” according to police spokesman Multan Khan.

The incident reportedly began earlier in the week as an argument between Sawan Masih, the sanitation worker, and his friend, a Muslim barber named Shahid Imran, according to the Times.

Imran reportedly accused Masih of blasphemy on Friday, a serious crime in Pakistan that triggers visceral and often violent reactions.

A large group of Muslims reportedly visited the Christian's home Friday night, and a blasphemy case was registered with the police after the crowd demanded action, according to the Associated Press.

Punjab Law Minister Rana Sanaullah said that all those involved in the arsons would be arrested, DAWN Pakistan reported.

"They have burnt each and every thing in my whole house. Nothing is left here. I don't know why this happened," Samina Riaz, a resident of Joseph Colony, told the AP. "Now we don't have even enough to eat."