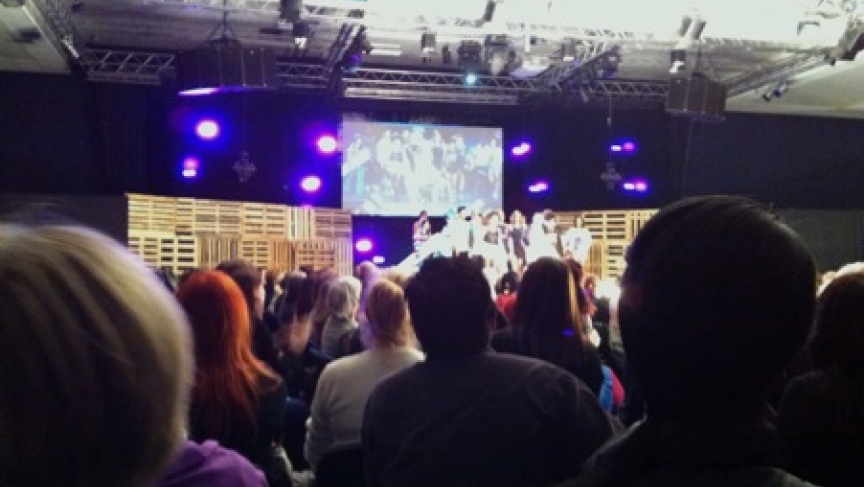 Tattered robes and rope sandals? Not exactly. A fashion show is one of the ways in which this church is extending the use of it's space. (Photo Credit: Rev Ruth Dowson)

Here's a problem facing many churches, both here in the US and around the globe: Dwindling financial resources are making it harder to meet the soaring costs of maintaining the physical structures of the church.

In Europe, there tends to be an additional complication. Often, the churches are historic, or were built on a grand scale to attract the faithful.

In other words, the buildings themselves are part of Europe's cultural heritage.

There's no official count of churches in Europe, though it's safe to say the number of soaring spires, vaulted ceilings and flying buttresses would be overwhelming. It's also increasingly overwhelming to take care of them.

For years, church attendance has been dropping. And as Europe's economic crisis continues, a growing number of Europe's churches risk being closed and sold off. So, how to get non-church goers back in the empty pews? Well, one solution is to make churches more fun.

"They can be art exhibitions or concerts that aren't religious, or they can be a lot more, sort of, high profile," said Leena Seim, who is with the Brussels-based Future for Religious Heritage, a new, Europe-wide secular network that wants to protect sacred spaces and make them more useful.

"There's an example in the UK where they've installed a circus school because they needed the height of the building. But the building is still consecrated, so it can still be used for religious functions," Seim said.

The practice of opening churches to secular activities of all sorts is called "extended use." Seim said that the goal is to make churches integral to community life once again so that people will want to protect them for the future.

There's a lot of ways to do this, and they go beyond nursery schools and AA meetings. Imagine a pub or a Starbucks at your local house of worship.

Or, for instance, Nissan debuting a new car at a church. But secular use of sacred spaces makes some people hot under the clerical collar.

"Some people of faith may say that the building is sacred therefore there are things you shouldn't do in it," said Reverend Ruth Dowson.

Dowson understands the feelings of the faithful, but she sees things a little differently. Dowson is with the UK Center for Events Management, and has studied the impact of extended use. She sees it as a major opportunity for churches to develop deeper relationships within a community.

The extended use movement is growing. Last November in Venice, the Future for Religious Heritage got proponents together to talk. Dowson presented her research on extended use at the conference. The results, she said, are promising.

"What I actually see is attendance increasing, which may sound strange," Dowson said. "The kinds of churches that are using events are bringing people into the church from outside, and they're opening the doors and saying, we are welcome."

In other words, it may take a little human intervention to protect the divine.