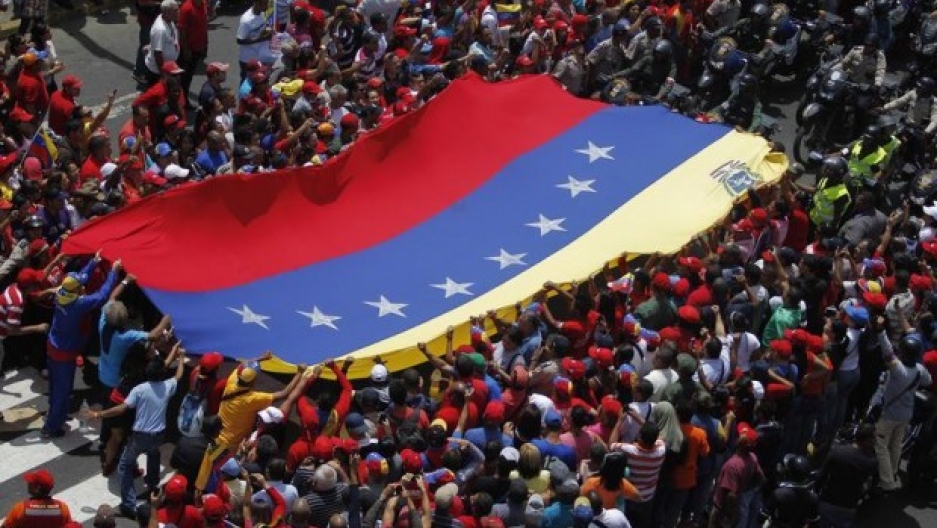 Supporters of Venezuela's late President Hugo Chavez stretch out a large national flag as they gather to see his coffin driven through the streets of Caracas, March 6, 2013. Chavez died on Tuesday of cancer, and authorities have not yet said where he will be buried after his state funeral on Friday. REUTERS/Jorge Dan Lopez (VENEZUELA - Tags: POLITICS OBITUARY) - RTR3ENOK

Share
Without Hugo Chavez can his ideology of "chavismo" survive? This was the question that anchor, Marco Werman posed to Moises Naim, a scholar at the Carnegie Endowment for International Peace and Miguel Tinker-Salas a professor of Latin American History at Pomona College Each had very different ideas about the future of chavismo without Hugo Chavez. "Chavismo depended on an economic model that was clearly unsustainable that is already showing strains that will make and force whoever is in charge to make very fundamental economic changes that will be very painful to the Venezuelan people," says Naim. But not so according to Tinker-Salas. "The reality is that there's been fundamental changes in the political culture in the political landscape and that change has also been seen throughout South America…There is no going back. The Venezuela of 2013 is not the Venezuela of 1998," says Tinker-Salas.