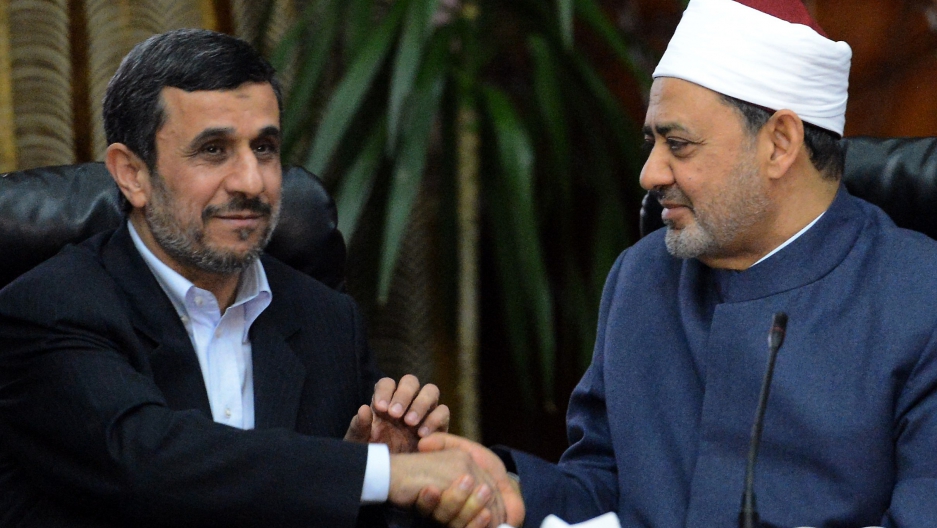 Egyptian Grand Imam of Al-Azhar Sheikh Ahmed al-Tayeb (R) shakes hands with Iranian President Mahmoud Ahmadinejad during a meeting at Al-Azhar headquarters in Cairo on February 5, 2013. Ahmadinejad held talks in Cairo on the divisive issue of Syria's war, as he kicked off the first visit to Egypt by an Iranian president since 1979.
Credit: Khaled Desouki
Share

Iranian President Mahmoud Ahmadinejad’s landmark trip to Cairo in early February had its share of low points: not one but two physical attacks on the president’s person — one of which involved a hurled shoe — and a scathing public condemnation of Iranian domestic and foreign policy delivered by Egypt’s top cleric.

Still, the visit represented an important step toward détente between Iran, the largest Shiite Muslim country, and the major Sunni power of Egypt, states which severed diplomatic ties after the Islamic Revolution of 1979. In retaliation for Egyptian President Anwar el-Sadat granting asylum to the deposed Shah, Iranian officials named a street in Tehran “Khaled Islambouli” after Sadat’s assassin (since renamed).

The Egypt-Iran thaw comes at a time of increased sectarian violence in the Muslim world. Though Sunni-Shia rivalry dates back to nearly the first days of Islam, relations are exceptionally volatile at the moment. Analysts say the intensified violence is likely due in part to fallout from the ongoing conflict in Sunni-majority Syria, led by Shia-affiliated Alawites. Much of the recent violence elsewhere has taken the form of Shias being targeted in Sunni-led states, such as mass killings in Pakistan, extremist attacks in Iraq and the brutal suppression of the uprising in Shia-majority Bahrain.

It's unknown whether warmer relations between Iran and Egypt could have an ameliorative effect on sectarian tensions in the region.

Asked whether the states’ decisions to mutually promote tourism and to renew Iran-Egypt air travel could result in citizen-to-citizen diplomacy, Senior Fellow for Middle Eastern Studies at the Council on Foreign Relations Steven Cook said he was “not overwhelmingly optimistic” that state actions would help overcome the divide.

“To some extent these problems can be overcome through citizen contact, but the [governments’] aim isn’t to patch up Sunni-Shia ties,” Cook noted, pointing out that Egypt’s agenda was more about differentiating itself from the Mubarak regime and asserting its independence from both regional and Western influences than fondness for Iran, while for Iran “it’s a way to puncture the idea that they’re not welcome in the region.”

Neighboring states’ policies on Syria reveal a similar breed of realpolitik. “With the Turks, Qataris, and Saudis supporting Sunnis, and the Iranians supporting Alawites …there’s a game that’s being played. Are the Qataris, the Turks, the Saudis really interested in Syrian Sunnis, or in dealing a blow to Iran?” asked Cook.

“It is really the use of sectarian division for political purposes that has created this, because if you look at the history of Sunni-Shia relations, yes, they never were particularly fond of one another, but we never had the sort of things that we see happening now,” she said.

Hunter points to the 1950s ecumenical exchanges between Shiite clerics in Qom, Iran and scholars at Cairo’s Al-Azhar University as evidence that today’s degree of strife is unusual. Now, she says, “Egyptian Islam has become a lot more influenced by Salafi tendencies, and the Salafis have a far more negative view of the Shias…they think Shias are kafir [“unbelievers”].

Still, Hunter is optimistic that “any improvement in Iran’s relations with the Sunni countries will help reduce sectarian tensions.”

Cooperation between Iran and Egypt in Syria could be particularly helpful, and Morsi, Ahmadinejad and Turkish President Abdullah Gul did conduct Syrian “Contact Group” meetings in February, though Iran’s support for the Bashar al-Assad regime has not wavered — at least not publicly.

Meanwhile, the effects of such political calculations continue to unfold on the ground.

“We didn’t used to have any Sunni militant groups as such in Syria,” said Hunter. “Now suddenly because of the conflict there are all and sundry, Al Qaeda is showing up there, and so on…I think religion gets a bad rap sometimes because of the way it’s been increasingly used as an instrument of policy, and that’s very dangerous.”