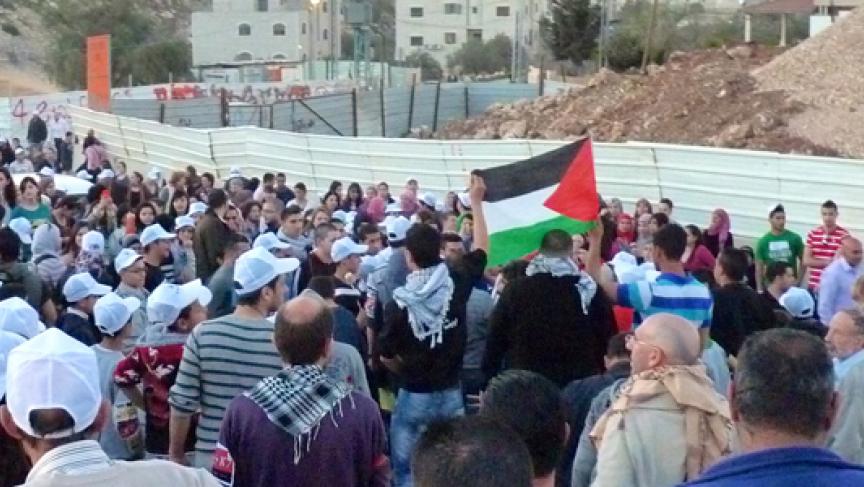 Residents of Beit Safafa at a recent demonstration to protest the Road 4 bypass plan for their village. (Photo: Matthew Bell)

Share
Heavy construction machinery cuts a wide swath of dirt alongside groves of olive trees and a row of upscale homes in south Jerusalem. This is the route for a new multi-lane bypass road road that will cut through the sleepy Palestinian village of Beit Safafa. The area is home to more than 9,000 people, who are not very happy about the infrastructure project known as "Road 4." "This is Beit Safafa," chanted during a protest in the village last week. "It's Arabic! And it's Palestinian!" They were a few hundred residents, along with a couple of dozen Jewish Israeli supporters. One of them was 60-year-old Salah Alyan, a businessman in Philadelphia Eagles sweatshirt who said the Jerusalem village where he grew up is about to suffer a devastating blow. Alyan said the new highway will, "be bad for the neighborhood." "It's going to be very noisy for us and we even cannot use it at all," he said. "There's no exit [for] us to use that road." When "Road 4" is complete, drivers will be able to zip through this side of town without traffic lights. Alyan and his neighbors say they will pay the price, but get none of the benefits. They will lose easy access to their schools, mosques and markets — not to mention losing property value. But this is not just a story about a neighborhood fighting city hall. In Jerusalem, city planning is never really just about planning issues, as one activist told me. Jewish Israelis view the "holy city" as their eternal capital. Palestinians, who still make up about a third of Jerusalem's population, think of Al-Quds — the city's Arabic name — as the capital of a future Palestinian State. "Road 4" is designed to link up a large block of Jewish settlements about a 25 minute drive into the West Bank with a major city highway. For Palestinians, this is all part of an Israeli plan to strengthen Jewish control over "greater Jerusalem" by putting facts on the ground. Ahmed Tibi is a prominent Arab member of Israel's parliament. At last week's protest, he described the project as an example of Jewish discrimination against Palestinians in Jerusalem. "The interests of Jews, mainly settlers, are superior to non-Jews," Tibi said. "Residents of Beit Safafa are Arab citizens of the city and they are neglected." "There is no [other village] divided by [a] highway but Beit Safafa." Beit Safafa has been divided before. After the war in 1948, part of the village ended up in Israel. The other part, on the Jordanian-controlled West Bank. The entire village came under Israeli control after the Six Day War in 1967. But that legacy means some of the residents are Israeli citizens. Others are Jerusalem residents but not full-fledged citizens. Still, Palestinian activists leading the fight against "Road 4" are using some very Israeli tactics. Ala Salman is one of 16 residents who've filed a court petition to change the construction plan. They want the road to be narrowed — from 6 lanes down to 4 — and they want more of it to go underground, in a tunnel. Salman says people in a Jewish area nearby did the exact same thing a few years ago. "They told the municipality, 'you must to stop the work,'" Salman said. Then they took their case all the way to to Israel's High Court of Justice and they won. Salman's group led a protest at the Israeli prime minister's Jerusalem residence last Thursday, in the same spot where Jewish protests are routinely held. Activists were sure to chant in both Arabic and Hebrew. They also welcome Jewish supporters to their protests. And they've encouraged Palestinian demonstrators not to play up connections between Beit Safafa's fight over "Road 4" and the larger Palestinian nationalist cause. Their rallies have been mostly peaceful, but things got ugly at a demonstration near the village last Friday. Several residents from Beit Safafa were arrested. Video posted by activists shows Israeli police on horseback confronting demonstrators, along with officers using batons and what appears to be tear gas. The real tragedy here, according to city council member Meir Margalit, is that this episode is radicalizing Beit Safafa. Margalit described the "village that used to be the most quiet village in East Jerusalem, [which] some of my friends say [is] the most Zionist village in [the city]." Now, he said Beit Safafa has, "become a place where an explosion can happen at any moment." Village activists say the city's disdain for them is obvious. They claim officials have skirted Israeli laws time and again. They also argue that the highway plan is fundamentally flawed. It dates back to 1990, and a lot has changed since then in terms of the layout of the neighborhood. A statement from the Jerusalem mayor's office says it did consult village residents and that it will work to provide optimal services to Beit Safafa. It also points to a lower court decision that ruled in the city's favor last month. Meanwhile, construction on "Road 4" continues, while residents of Beit Safafa await a decision from the High Court.