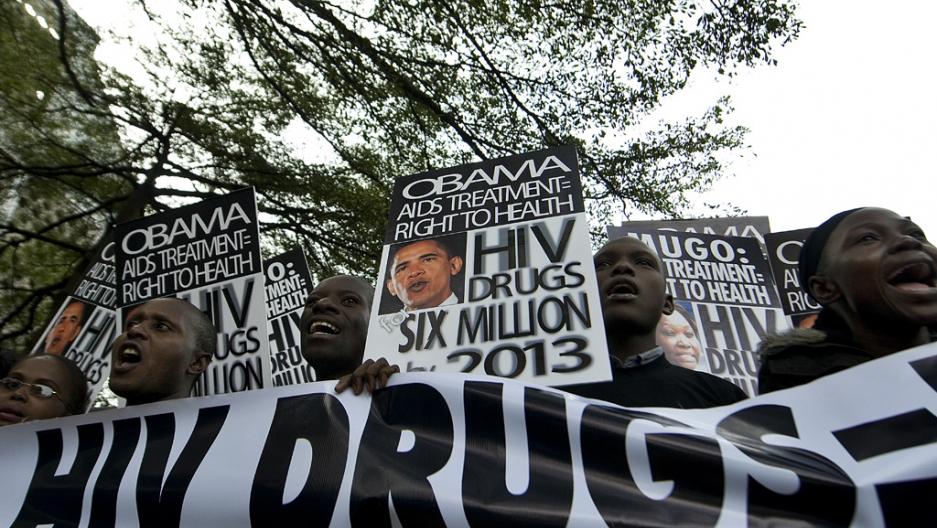 HIV/AIDS activists, some of them living with the virus, yell during a demonstration April 25, 2012 in Nairobi on the sidelines of a joint conference sponsored by the US embassy here and Kenya's vision 2030 about health and reducing mortality in the East African nation. The activists demanded that the US' - HIV programme, PEPFAR and the Kenya government work together to utilise some 500 million of unspent PEPFAR funds to get desperately needed HIV treatment to more Kenyans.
Credit: Tony Karumba
Share

An independent evaluation of the President’s Emergency Program for AIDS Relief (PEPFAR), released last week by the Institute of Medicine (IOM), lauded the program’s achievements as proof that HIV services can be delivered successfully on a large scale. The report also recommended several changes to the program, to ensure that the HIV/AIDS response is sustainable.

The report, a 600+ page document resulting from a four-year study mandated by Congress in 2008, concluded, “PEPFAR has been globally transformative. Across partner countries, PEPFAR was described as a lifeline, and people credit PEPFAR for restoring hope.”

PEPFAR was established by the George W. Bush administration in 2003 and reauthorized by Congress in 2008, and is largely viewed as having successfully decreased HIV/AIDS prevalence around the world.

A December 2012 UNAIDS report found that between 2001 and 2011, HIV incidence in 25 countries declined by more than 50 percent and decreased by 20 percent worldwide. Since 2005, the number of AIDS-related deaths has declined by almost one-third.

A centerpiece of the IOM’s recommendations for PEPFAR was that the program must shift from an emergency response provider to an advisory role so it will be sustainable. Other countries, the report said, must begin to take ownership of their HIV/AIDS responses.

“PEPFAR will gradually cede control, as partner countries take on more central roles in accountability and setting strategic priorities for investment in their HIV response,” concluded the IOM report brief. “The pace of transition will vary by nation, but such an evolution in PEPFAR’s mission is vital.”

David Haroz, who works at the state department as a special assistant to the principal deputy US global AIDS coordinator, said that PEPFAR has long been planning for this transition, and in some countries, like South Africa, the change has begun already.

“There’s a huge push from within South Africa to say, ‘these are our people and this is our epidemic. Our economy is growing and we want to prioritize health,’” said Haroz.

The question is whether PEPFAR will be able to pull off this transition without sacrificing the progress it has made around the world. Some, including the AIDS Healthcare Foundation (AHF), are worried.

In an email interview, Omonigho Ufomata, AHF's director of Global Policy & Advocacy, explained that AHF does not want to see a transition to country ownership if that means patients have a more difficult time accessing care.

“We want all that the United States can do along with all that the South African government can do,” Ufomata wrote. So long as there are still people dying of this disease and we witness overflowing waiting rooms, we don't want to see transitions.”

Haroz added the caveat that not all transitions are smooth. Even though PEPFAR has attempted to create transition plans that takes into account all patients from all facilities, it is possible that some patients could fall through the cracks.

“I’m sure there are things that get lost in the shuffle and things that could be done better,” he said. “But I think it’s a pretty historic thing that’s taking place.”

The question is, can the Obama administration’s promise of an “AIDS-free generation” survive the transition?