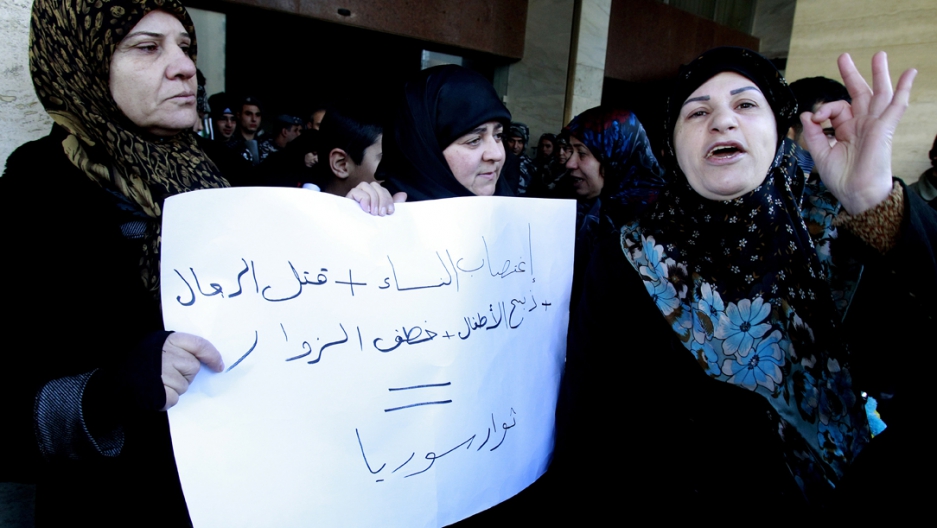 Relatives of Lebanese Shiite pilgrims kidnapped last May in Syria hold a placard and shout slogans during a protest in front of the Qatari embassy in Beirut on Jan. 10, 2013. A group of about 50 demonstrators picketed the embassy of Qatar, which backs Syria's anti-regime rebels.
Credit: Anwar Amro
Share

BEIRUT, Lebanon — Ibrahim’s relatives are rich and powerful. But the young Lebanese taxi driver was reluctant to go into the family business when he found himself struggling to make ends meet. His family is one of the country’s largest Shiite clans, and their business is kidnapping.

"Of course I don't want to do this," Ibrahim said of his new part-time job driving for his cousins, both professional kidnappers. "But [the victims] are never harmed and I have to feed my family."

Kidnapping for ransom is one of the few forms of economic activity to flourish here as the civil war in neighboring Syria cripples the tourism industry and erodes the authority of the state.

In broad daylight gunmen snatched the child, the son of a prominent businessman, as he waited for a ride to school in an upscale Beirut neighborhood. He was released five days later, after the family paid a reported ransom of $250,000. Dozens of Lebanese businessmen have been taken and held for ransom over the past year.

A new report compiled by the Lebanese army and security forces claims to know of at least 37 active kidnappers, citing members of the country’s most notorious crime families. The report says they operate out of "private lairs in their hometowns," mostly in the Shiite areas of the country.

The working class Hay al-Salloum neighborhood of southern Beirut is one such lair — a dense warren of shacks, auto mechanic shops and cellphone stores. It is home to the bulk of Ibrahim’s family.

Ibrahim said he was much better off driving around tourists than kidnap victims. But, ironically, a Syria-related kidnapping spree last summer led governments in the Gulf to order its citizens — the biggest spenders in Lebanon — to avoid the country.

"The last big job I had was for a Saudi man who paid me $3,000 to be his driver for one week," Ibrahim told GlobalPost. "I took him to clubs, the mountains, everywhere. But that was last year, and until the crisis in Syria is finished I won't make money like that again."

Authorities blame the Mokdad clan for last summer’s spate of abductions. The family kidnapped dozens of Syrians in Lebanon in retaliation for a family member's abduction by Sunni rebels in Syria. Armed and masked men from the family's "military wing" appeared on local television stating their demands for a prisoner swap. They also threatened to kidnap Gulf nationals because they supported Syria's rebels.

In spite of the very public nature of the Mokdad’s abductions, it was a month before they were arrested. Maher Mokdad, the family’s TV spokesman, was quietly released from prison in January after just a few months. According to several Mokdad family members, Maher was given a "VIP room" in the infamous Roumieh prison in a deal brokered with military officials and politicians.

After yet another kidnapping for ransom in January, Interior Minister Marwan Charbel admitted to a local newspaper that authorities knew the full names of most of the perpetrators. Yet they remain at large.

The Lebanese government, which is balancing ever more volatile political divisions — made worse by the conflict in Syria — appears reluctant to launch a crackdown. Lebanon’s political system ensures that top security and cabinet posts are divided among religious sects, which often strengthens public accusations of bias, especially within the various security agencies.

For those with political cover, kidnapping — like other forms of criminality — has become a way of life.

"This is business," said one of Ibrahim's cousins, who gave his name as Hassan. He claims to have committed armed robberies and sometimes sells hashish, which his family grows near the famous Roman ruins at Baalbek, in the Bekaa valley.

The model for kidnapping, according to Hassan, is simple. They choose a businessman who is prosperous, but not so much so that he would travel with a robust security detail. Then his every movement is watched for up to two weeks. For the abduction, getaway vehicles are usually accompanied by a lookout riding a motorcycle. Ideally, Hassan said, they make the grab within close proximity to a safe house, usually in southern Beirut or in the Bekaa valley.

Hassan insists none of the victims are harmed while in captivity. In fact they are treated as "guests," he said, and are well fed and looked after.

"We don't have anything against these people," he said. "But we do know that they are very rich."