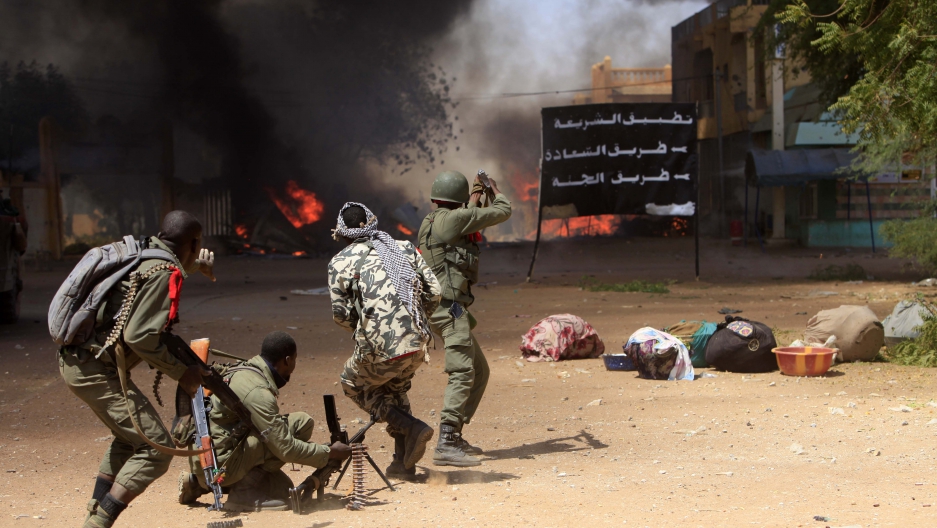 Malian soldiers fight in the city of Gao.
Share

Ennahar television said on Thursday that 40 militants, including Abu Zeid, were killed during airstrikes in the region of Tigargara in northern Mali three days ago.

The report hasn't been confirmed by the Algerian government and Reuters said a French Defense Ministry official declined to comment.

An Algerian national, Abu Zeid has been considered one of the most violent and radical AQIM field commanders with ambitions to head the international militant organization now based in the African Sahel. Although he was not a veteran of the Islamist-led guerrilla war against the Soviets in Afghanistan, unlike many of the seasoned AQIM jihadists of AQIM, he built his reputation as a fierce fighter during the Algerian civil war of the 1990s.

Algeria has long sought to kill or capture Abu Zeid during its decades-old battle against armed Islamic groups. He was pushed out of Algeria and into neighboring Mali following an extensive couterterrorism campaign here in 2005. Last year, an Algerian court sentenced the commander to life in prison in absentia for his role in deadly attacks inside Algeria.

"If it's true, it doesn't mean the fight is finished," retired Algerian military colonel, Mohamed Chafik Mesbah, said of the reports of Abu Zeid's death. "But it will be a very good thing for Algeria and for the region."

"He is worse than Mokhtar bil Mokhtar," he said, referring to the jihadist leader who led the deadly attack on Algeria's In Amenas gas plant last month. "He'll kill anyone."

Zawi said his network of tribal sources in northern Mali, built up over years of intelligence work in the Sahel, is giving conflicting information about whether or not Abu Zeid was actually killed.

If he was, Zawi said, he will be easily replaced. Abu Zeid has suffered from poor eyesight due to diabetes and has had trouble operating at night.

"Someone else will take his place, just like [Ayman] Zawahiri replaced bin Laden" as the leader of Al Qaeda, he said. "The fight will carry on."

Abu Zeid is believed to be behind the execution of British national Edwin Dyer in 2009, and Frenchman Michel Germaneau in 2010, according to British news outlet Sky News.

French forces launched airstrikes on Mali in January, in a bid to help the Malian government seize back control from Islamist rebels and AQIM, which had been advancing on major cities from their stronghold in the north.