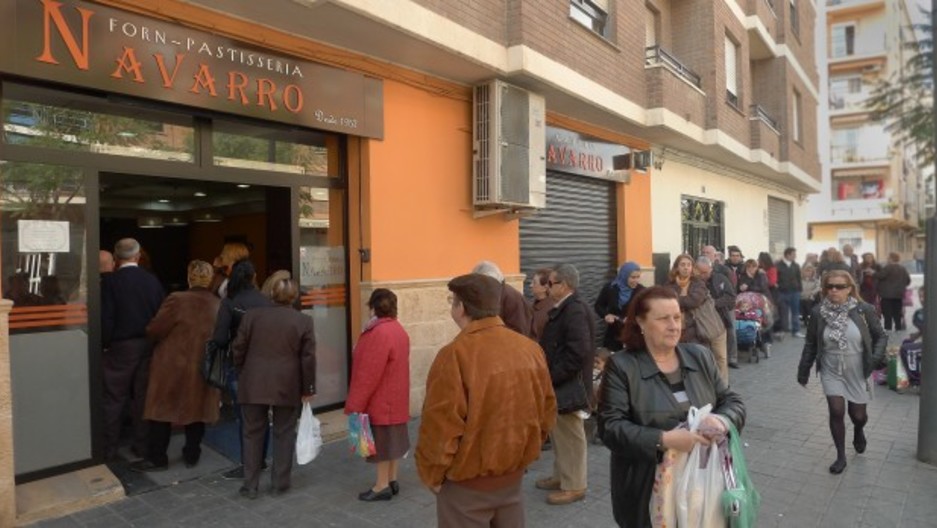 Be prepared for a long wait at Pepe Navarro's bakery. His 20-cent loaf has attracted the masses, and the ire of his competitors. They accuse him of underselling to drive them out of business. It's a charge Navarro denies. In the meantime the general public couldn't be happier, especially those Spaniards living on pensions or unemployment benefits.

A baker in the region around Valencia, Spain, has his own answer to the national economic crisis. He's selling loaves of bread for just 20 euro cents. Other bakers are furious, claiming he's selling below cost to put them out of business. But as The World's Gerry Hadden reports, most customers appreciate the cheaper bread at a time when they're struggling to make ends meet.

In the very long line outside of one of Navarro's three bakeries, an elderly customer named Milagros puts the low-cost bread in perspective.

"You come with one euro," she says. "You leave with five loaves of bread. With that same euro before, you could only buy one."

It's noon and there are close to 50 people in line. Most of them are retirees, people living on fixed pensions, like Milagros herself. In the mornings, people say, the line goes around the block.

"You see unemployed people, but also working folk," Milagros says. "People of all classes are coming. From all walks of life."

The story goes that Mr. Navarro, the owner, was selling his bread at normal prices and, going under because of the crisis. So, he slashed his price. Now, he's selling about 13,000 20-cent loaves a day.

Every hour so big delivery vans show up and roll crates of freshly baked loaves past the crowds. On this day Mr. Navarro isn't around, but a worker named Sofia takes a moment to talk. She says this isn't a gimmick. The low price is here to stay, and not only the customers benefit.

"A lot more people have been hired on … we used to be four workers, now there are 10 of us," Sofia says. "It's the same in all of the bakeries he's operating, plus, he's hiring local people. And creating jobs in delivery and at his main bread factory."

Navarro has told Spanish media that that's the key to his ability to sell so cheap. He owns his whole supply chain. But the local Bakers Guild isn't buying it. It accuses Navarro of trying to price them out of business. And they've closed ranks to protect their higher prices.

In a bakery across town, the owner, who doesn't want to give her name, says the rest of us in town refuse to sell our bread for 20 cents. Navarro's the only one.

She says that she makes quality bread and sells it according to the bakers guild norms, at what she think is a fair price.

But if the bakers in Quart de Poblet's goal is to stop the contagion, they've failed. In towns across the region, and in the regional capital of Valencia itself, signs for 20-cent loaves are proliferating in bakery windows.

On an early morning in the neighboring town of Torrent, a sleepy baker awaits her first customers. On her door there's a sign with just ".20" written on it by hand. It's enough, she says. People get it. And they come in.

"Why have we followed suit? Because we have no choice, since this man, Mr. Navarro came along and decided to set this price," she says. "Now, if you don't sell for the same, you lose your clients. Many bakeries have had to close."

Cries of "unfair" from competitors haven't kept people from buying Navarro's low cost bread. So the Guild is trying something else: questioning the quality.

A baker in downtown Valencia named Ana says she understands why people who can't make ends meet like Navarro's 20 cent price tag. But she wonders about the quality of the ingredients: for example, the flour. If you lower price, she says, you lower quality.

To that Navarro has said, sure, okay, a little bit. But so what. And it seems his customers agree.

Pensioner Jose Doce, a former ceramics worker who often has to provide meals for his grown daughters waits in the long line at Navarro's,

He says Navarro's bread is better than your typical baguette. Or course, in the olden days, he says, it was a different story altogether.

People made bread by hand. But now considering it's all industrialized production, this bread is actually good. By the end of the day it isn't all dried out.

With a normal baguette, he says, if you go to eat it the next day and it's hard as a stone.