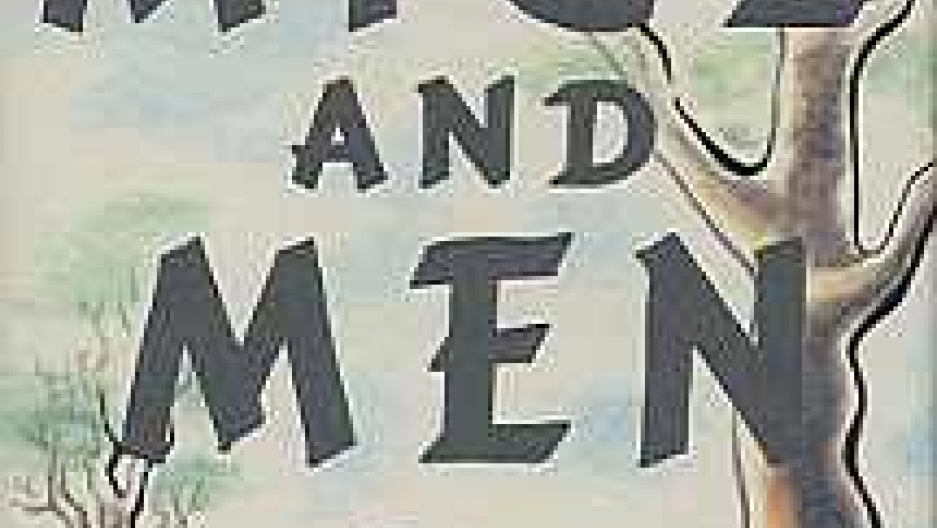 Share
Turkey is no stranger to TV and internet censorship. But recently, a controversy erupted over a call to censor a book on Turkey's recommended reading list for students. The book was John Steinbeck's "Of Mice and Men." Ashley Cleek reports from Istanbul. Bilge Sanci says she still can't quite understand the problem. Bilge is the head editor at a publishing house in Istanbul, and last month, she says, a parent complained that a book she published was inappropriate for his child. The book in question? The Turkish edition of John Steinbeck's Of Mice and Men. But not the whole book – just pages 63 and 64. In fact, Bilge checked, it's just a couple of lines. "They are playing cards in the village and they say let's get to the town and hanging with the girls at a house, like Miss Suzie's house, or something like that," Bilge explains. "That's it. There is nothing else." Miss Suzie's house is a brothel, though the book never uses the word. Still, the local school board urged Turkey's Ministry of Education to delete the offending lines. "They said it is not necessary for a child to know about the girls, about these kind of houses, and this kind of information," Bilge says. "But the book is telling another story about friendship and many things, and this is only two pages." The complaint came as a surprise. Because "Of Mice and Men' is on the Education Ministry's list of 100 books every Turkish child should read. The Ministry quickly dismissed rumors that Steinbeck would be censored. But some teachers say there's a growing climate of intimidation. M.Y. teaches high school in Istanbul. (He doesn't want to give his name for fear of jeopardizing his job.) He's says it's best if we meet in a park. He tells me that in 14 years of teaching, he's never gotten in trouble for recommending a book. "I believe it's just chance that no one's complained about me yet. It could happen anytime." M.Y. says he gives his kids classic books – a far cry from "50 Shades of Grey" he says. But recently, he's noticed a change in the government's recommended reading list. Pulling out a list of approved books, he says they used to be chosen on literary merit, but now, some make the list just because they have Islamic references. M.Y. worries it's part of a government effort to make Turkey's schools more traditional and conservative. He points to a speech that Prime Minister Recep Erdogan gave last year, where he said his government "aims to raise religious youth." Osman Koca teaches literature at a religious public high called an imam hatip school. These schools teach the standard curriculum, along with Islamic studies. Imam hatip schools were restricted under Turkey's secular governments, but they've become popular again thanks to the support of the conservative governing party. Koca is a writer himself. He lists some of his favorite authors – Emile Zola, Leo Tolstoy, and John Steinbeck. He says he's not worried about official censorship, and he thinks it's wrong to question a book based on one page. "You judge the writer according to this one page. I cannot agree with this," Koca says, pointing to a small tea glass on a nearby table. "How can you describe a whole room by looking at just a tea glass?" Still, he doesn't think 15-year-olds should read about brothels. When my translator, Onur, tells him he definitely knew what a brothel was when he was 15, Koca says this generation is different — they're more innocent. "We have to imagine their mental state, they do not know about these things. And they don't need to," Koca explains. "We should have some norms for the books we assign to a 14- or 15-year-old kid." Koca says he will assign "Of Mice and Men" to older teens who can understand its content. For now the Ministry of Education seems to agree. But it's trying to keep tabs on what teachers assign. Recently, it established a hotline — number 147 — where parents can call to complain about a teacher, a lesson, or a book. The complaints go directly to the head office, which investigates. Some teachers say it feels like a witch-hunt. Even Osman Koca, admits he's been investigated for assigning an unapproved book. "If you want to suggest something outside this list, you are on fire, you are on a cliff," Koca says. "I personally suffered from it." Koca says now he's more careful about the books he recommends. As for "Of Mice and Men," it's still on Turkey's reading list, and sales of the 20th century American classic have reportedly spiked in Istanbul.