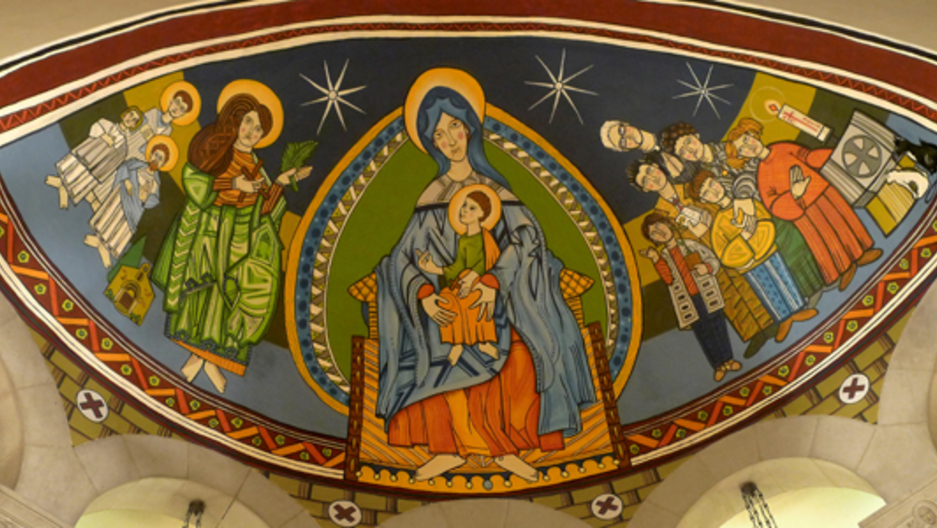 The ceiling over the sanctuary in L'Hospitalet's Santa Eulalia church is decorated with a romanesque painting done by graffiti artists "Rudi" and "House." Father Ramon Borr found them online and convinced them to accept the c

A priest in Spain recently let a bunch of graffiti artists go to town on his church.

Specifically, on the dome ceiling above the main altar. You know, the space Michelangelo liked to paint.

The Santa Eulalia church in L’Hospitalet, near Barcelona, is neo-Romanesque in design, with a Catalan twist. Inside, it’s austere. The walls are painted nondescript colors — the statues of Jesus, the Virgin Mary and the Saints are simple.

See more pictures from the church at TheWorld.org.

In the ante-chamber of the church on a recent evening, he recalled how he came upon the idea while surfing the web. He said to himself, why not graffiti?

“Even though the press is scandalized by graffiti artists,” he said, “for me graffiti is just another artistic technique.”

The result is a spectacular splash of colors — rich blues, bright reds and greens, on the rounded ceiling dominating the main sanctuary. But don’t think street art. In fact, the style of the painting is faithfully Romanesque, with static, two-dimensional renderings of Saint Eulalia, the Virgin and Baby Jesus and the congregation. Borr says he sent his two young graffiti artists to school before he let them near the place.

“I told them they couldn’t start until they visited a museum in Barcelona to study the Romanesque style I was interested in,” he said. “So they went, and studied, even took out some books.”

Only after that could the project come together.

One of the two ‘graffiteros’ was Raul Sanchez, whose tag, or signature for street art, is House. House said when Father Borr hired him he was surprised, nervous and thrilled.

“Only a graffiti artist can tell we used aerosol cans to do the work,” he said. “We tried to conceal that. In the Roman period, spray paint obviously didn’t exist.”

House said if the spray-paint style had been too obvious it wouldn't have been what Father Borr wanted.

Not that House completely conformed. If you look carefully at the figures in the congregation, you see an elderly woman passing a thimble to a young boy. That woman was House’s grandmother, who, he said, was miraculously cured of a fatal spinal disease in the 1950s.

“She was confined to bed with her sewing table,” he said. “One day a man appeared, a stranger, and told her she would get better.”

According to family legend, she stood up, grabbed her thimble and collapsed on the floor. When she woke, she was cured.

“The doctors could never explain it,” House said, “and the stranger disappeared.”

Father Borr says he’s happy the boys personalized their work. Anything to bring more people in.

“As Pope Benedict XVI has said, art should attract the faithful,” he explained.

The Graffiti Dome may be working. In a bar just around the corner, a bunch of non-church-going guys were enjoying beers after work on a recent day. They’d never seen the dome, but were impressed by photos.

Then a guy at the far end of the bar spoke up.

He told the others they ought to set their drinks down and check it out themselves.

“It wouldn’t hurt you to spend a little time in the house of God.”