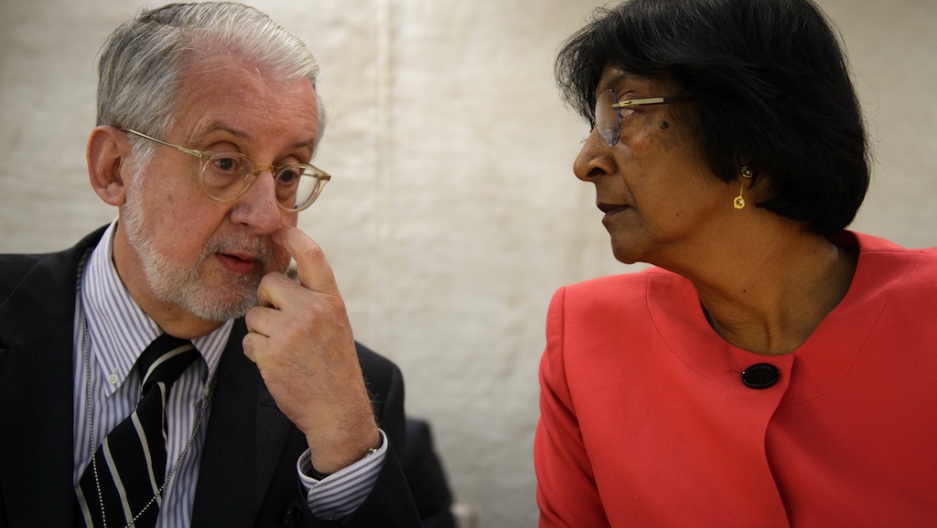 The head of the United Nations' Independent Commission of Inquiry on Syria, Paulo Sergio Pinheiro (L) speaks with UN Human Rights Commissioner Navi Pillay during a session of the UN Human Right Council in Geneva. The Council meets again this week to discuss the Vienna Declaration and Programme of Action and assess future plans.
Credit: FABRICE COFFRINI
Share

Phil Lynch is the Director of the International Service for Human Rights in Geneva. You can follow him on Twitter at @PhilALynch.

Twenty years ago the international community gathered in Vienna to discuss the global promotion and protection of human rights. With the Cold War thawing, the more than 170 governments and 800 non-government organizations in attendance saw an opportunity to effect a paradigm shift in the role of human rights in international relations.

Reflecting this, the Vienna Declaration and Programme of Action (VDPA), adopted by a remarkable consensus in 1993, set out that the “promotion and protection of human rights is a matter of priority for the international community” and that the realization of human rights must be “the first responsibility of governments.”

This week, national leaders, senior diplomats and human rights defenders from around the world will gather in Geneva to attend the 22nd session of the UN Human Rights Council. The agenda is typically busy, with the Council being called on to consider and take action on country situations from Syria to Sri Lanka and thematic issues from counter-terrorism to the rights of the child.

This year's agenda also makes space for a discussion and reflection [document] on the achievements of the VDPA over the last two decades and the implementation challenges ahead.

How far has the cause of international human rights really come since 1993? Can it really be said that the protection of human rights has become a matter of priority for governments and the global community?

There is no question that the VDPA has contributed to a number of significant institutional human rights developments, including the establishment of the post of UN High Commissioner for Human Rights, currently held by Navi Pillay. The High Commissioner plays a leading role in human rights standard-setting and monitoring, most recently calling international attention to a death toll in Syria approaching 70,000.

The VDPA has also led to a strengthening of domestic human rights mechanisms. It precipitated the establishment of many national human rights institutions and led to the elaboration of National Human Rights Action Plans. Properly mandated and resourced, both of these mechanisms can play an important role in contributing to the domestic implementation of international human rights obligations.

There is also no question that the VDPA contributed to the normative development of human rights. It affirmed that all human rights are universal and interrelated and highlighted the links between human rights, democracy and development. It also re-affirmed the rights of equality and non-discrimination, and the equal and inalienable rights of women and girls. As senior diplomats gather in Geneva next week, their words and actions at the UN Human Rights Council will be revealing of the international community’s commitment to these norms.

This session, the Human Rights Council will be seized of a range of country situations, including in relation to Syria, North Korea, Mali, Burma and Iran. The Council will also be called on to respond to the UN High Commissioner’s most recent report on Sri Lanka.

The report highlights the ongoing lack of accountability for alleged violations of international human rights and humanitarian law during and in the immediate aftermath of the civil war. It also calls attention to current concerns as to erosion of the rule of law and widespread allegations of extrajudicial killings, arbitrary detention, torture and the disappearance of dissidents.

The report concludes by reiterating the need for “an independent and credible international investigation into alleged violations of international human rights and humanitarian law.” The strength of the Council’s response to the High Commissioner’s report will help determine whether 20 years on, the VDPA commitment that human rights be a “matter of priority for the international community” remains rhetoric or becomes reality.

Despite this, human rights defenders around the world continue to face attacks, intimidation and reprisals for their work. Reflecting this, Norway has announced that it will put a landmark resolution to the Human Rights Council this session, calling for the elimination of laws which impair or restrict the work of human rights defenders and the passage of laws which ensure they are able to fully exercise their fundamental rights and freedoms. The world needs more Norways.

Twenty years on from Vienna, it seems clear that there has been modest but important progress in the global promotion and protection of human rights. While pausing to celebrate, however, this is no time for complacency. Human rights defenders may have history on their side, but progress in the achievement of human rights is never inevitable and the prevention of regress requires, to borrow Thomas Jefferson’s words, our eternal vigilance.