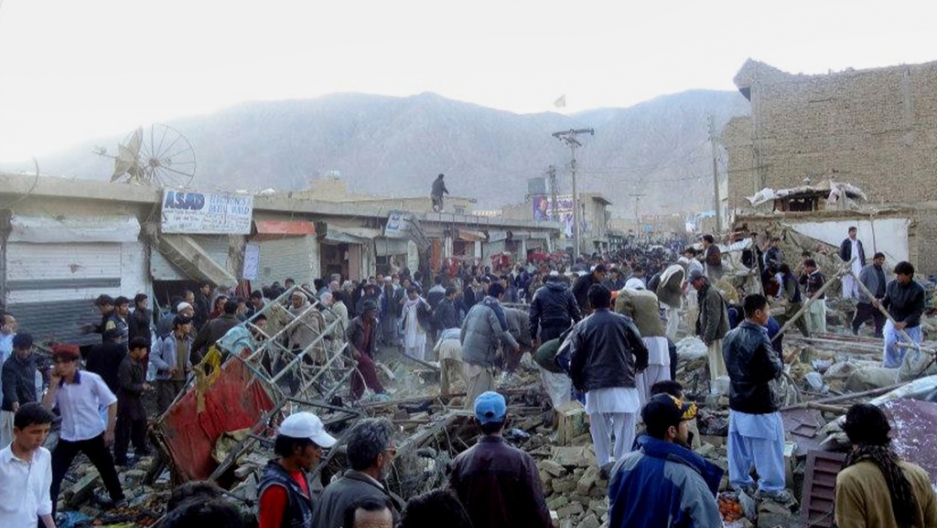 People gather after a bomb targeting Shiite Muslims exploded in busy market in Hazara town, an area dominated by Shiites on the outskirts of Quetta, on February 16, 2013. The bomb killed 63 people including women and children and wounded 180 in Pakistan's insurgency-hit southwest, police and officials said.
Credit: Stringer
Share

Pakistani Shiites are protesting a continued lack of security and government protection after bomb blasts ripped through a Quetta produce market over the weekend, leaving 84 dead and more than 169 wounded. Shiite leaders blame the Sunni militant group Laskhar-e-Jhangvi for the bombings.

The bereaved Shiite community, made up of mostly ethnic Hazaras, is for the second time in five weeks making a radical statement to the Pakistani government: They are refusing to bury their dead.

"The protests of the Hazara-Shia community have gone unnoticed for so long — about a decade now — that refusing to bury the dead is a desperate last-resort act to get attention to their plight," Hazara political commentator Ahmad Shuja told GlobalPost.

"In Islam, the dead should be buried as soon as possible, but by refusing to bury them, the community is making a strong religious-cultural statement."

Shiite women began the shocking demonstration in Quetta on Feb. 17, according to the BBC, calling on the government to investigate the perpetrators of the bombings.

Shuja said that the protesters are thus "throwing the ball into the government's court, by making burial contingent on a decisive crackdown on terrorists who killed so many innocent civilians."

Quetta high school student and volunteer English teacher Zainab Yaqubi was working at a nearby school on the evening when the recent blast occurred. She described the blast to GlobalPost, which at first she mistook for an earthquake.

"Everybody was trying to rush out, but we could not because we were stuck in the classroom. When I finally came out, I saw all the windows in the school were broken," Yaqubi said.

"On my way home, I saw the dead bodies and the injured," who were screaming, Yaqubi said. "They were women and children, some as young as 10. I was crying and I felt like I was weeping blood."

Yaqubi's neighbor, a pregnant woman, had been purchasing vegetables for her family when the bomb went off. Yaqubi said the woman was severely burned and later died from her injuries, leaving behind four children and a husband.

According to figures collected by Hazara.net, 1,300 members of the minority group have been killed since 1999, and about 3,000 more have been injured.

Eight separate attacks have taken place since the start of 2013 alone, killing 205 and injuring more than 313, according to the website.

On Jan. 10, a bombing at a pool hall in the Hazara portion of Quetta killed 104 people — after which the Hazaras also refused to bury their dead for days.

Rights groups have also criticized the government's hands-off attitude toward the violence.

"The government needs to show some backbone and act urgently to protect vulnerable communities such as the Hazara, or risk appearing indifferent or even complicit in the mass killing of its own citizens," Human Rights Watch Pakistan Director Ali Dayan Hasan said in a recent statement.

“The terrorist attack on the Hazara Shia community in Quetta is a failure of the intelligence and security forces,” Nawab Zulfiqar Ali Magsi, governor of Balochistan province, said during a recent television appearance.

Magsi later told Geo News that intelligence forces were either "too scared or too clueless" to protect Shiites from violence — an opinion backed up by numerous pro-Hazara supporters.

"The Pakistani Government and the powerful military-intelligence are, in a way, in complicity in this genocide-in-making by turning blind eye and deaf ear to the killings," wrote Afghan journalist Abbas Daiyar.

"Quetta is a small city with a huge military garrison and heavy presence of Inter-Services Intelligence (ISI) and Military Intelligence (MI)," he said. "How come the small group of LeJ (Laskhar-e-Jhangvi) terrorists operates with impunity?"