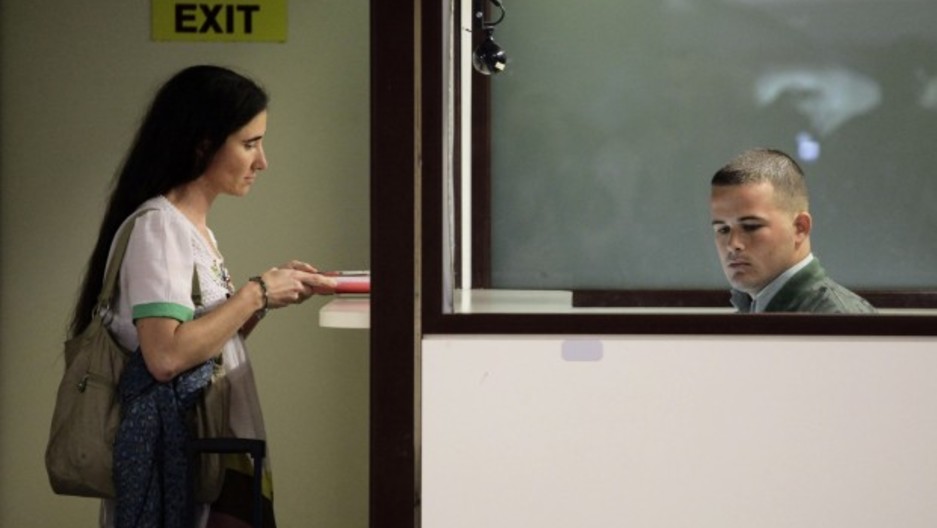 Cuba's best-known dissident, blogger Yoani Sanchez, stands at the emigration control at Havana's Jose Marti International Airport February 17, 2013. Sanchez says she plans to make good use of "my victory" when she leaves on an 80-day-tour of more than a dozen countries on Sunday. Sanchez, considered Cuba's pioneer in social networking, told Reuters on Thursday that she would visit the headquarters of Google, Twitter and Facebook, and travel to Brazil, Argentina, Peru, Mexico, the United States, Spain, Italy, Poland, the Czech Republic and other nations. REUTERS/Desmond Boylan (CUBA - Tags: POLITICS CIVIL UNREST TPX IMAGES OF THE DAY) - RTR3DX0W

Share
Cuban dissident blogger Yoani Sanchez had been denied an exit permit by the Cuban government over 20 times in recent years. Cuban law has now changed and exit permits are no longer required. But, the government can still deny permission to travel by refusing to issue a passport. That didn't happen in Sanchez's case as she has started an 80-day trip around the globe, including stops in the United States. Ted Henken is involved in planning the Cuban blogger's American itinerary. Henken is a professor at Baruch College in New York. He says "this is something to celebrate and is a hard won citizen victory not only for Yoani, but for all Cuban citizens."