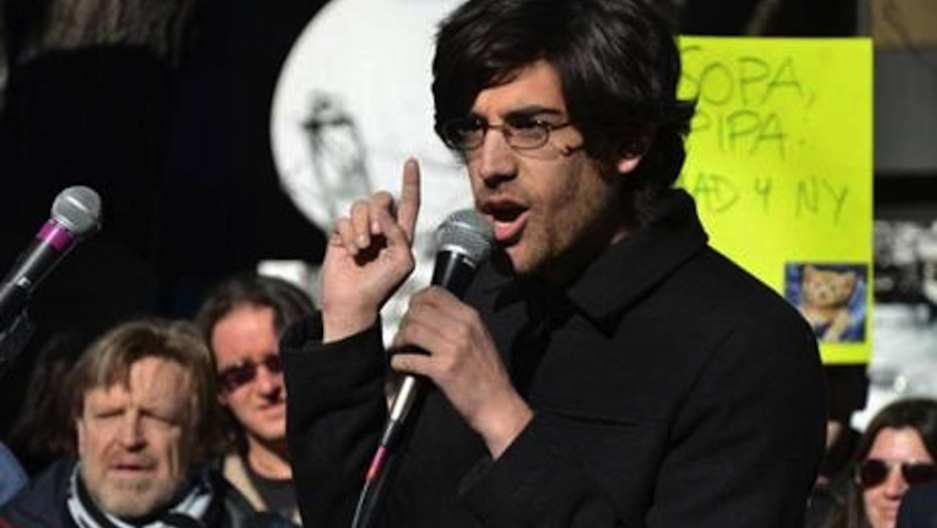 Freedom of the internet, the pet cause of the late programmer Aaron Swartz, is a basic right the president should address in the State of the Union tonight.
Share

We can be pretty certain the president will glad-hand the Speaker of the House, smile gently at Michelle and the girls, and give a rousing oration that's softly critical — but ultimately uplifting and optimistic — when he addresses the nation tonight.

But what if Obama were to be honest about the state of our union, and not just economically? What if he were to shift focus from human rights abuses committed by other countries to those committed at home? Rather than use a couple hours of television to boost his popularity numbers, he might look at his history on the following domestic human rights issues, acknowledge his faults and shortcomings and put forward a plan to address them.

We're past two election cycles of pandering, but it's unlikely Obama will discuss closing the prison at Guantanamo Bay, a promise he made during his first campaign and hasn't fulfilled five years in. Guantanamo is ground zero for the torture debate, and the alleged scene of various illegal (by international rights laws) interrogation techniques. The prison is also home to over 20 Yemeni nationals who have not been charged with a crime, and who were ordered to be released by a federal judges. Although Eric Holder himself has acknowledged the legal quagmire of holding the men, there is no plan to repatriate them.

The Atlantic this week published a must-read article about a military prosecutor who withdrew from the Guantanamo cases that included this list of "interrogation techniques" from the master plan compiled by Donald Rumsfeld.

The US is doing incredibly poorly when it comes to combating income inequality. There haven't been significant shifts in un- and under-employment, despite the president's best efforts, and there's still palpable rage against Wall Streeters and bankers who perpetrated fraud against the public and have yet to be punished for it.

But the president won't talk prosecution, despite demonstrated criminal activity by a number of banks and corporations. As the Huffington Post put it recently, these groups are "too big to jail." The most recent example might be HSBC's walking away with a slap on the wrist after it came out that the financial giant was allowing Mexican drug cartels to launder money. Not to mention the parties responsible for the financial meltdown of 2007/2008.

Why is it so hard to take these people to task? One only needs to look in the president's piggy bank. He accepts campaign donations from all the big guns: Goldman Sachs, Bank of America, and the rest, and his cabinet is full of a revolving door of former CEOs and company presidents from the same companies that were complicit in illegal actions.

There is no oversight at all when it comes to the "secret" drone program the executive branch is operating in Pakistan, Yemen, Somalia and Afghanistan, not to mention the seemingly totally arbitrary system for domestic use.

As I reported yesterday, civil liberties advocates are up in arms about the president's drone systems, or lack thereof. Homeland Security has been uncooperative with Freedom of Information Act requests, and the death toll abroad climbs higher every day.

However, the drones aren't the only problem – Obama has a "kill list" and a hastily put together set of vague regulations that govern it. The kill list makes it "legal" (against all international laws and treaties) for the American government to kill anyone, anywhere, including American citizens (like Anwar Al-Awlaki and his son, killed in 2011), if they're even suspected of being a potential threat.

Obama should support legislation that's been nicknamed "Aaron's Law" in tribute to Aaron Swartz, the young computer genius who killed himself last month after what his family has called "harassment" by the Department of Justice.

"Aaron's Law" would be a badly needed update to the 1986 computer crimes law, the Computer Fraud and Abuse Act, and it is imperative that it gets passed.

Aaron was facing more jail time for hacking JSTOR than rapists and murders serve (30 years). But although Aaron is lost, the cause isn't. Hackers and information activists like Barrett Brown, Weev, and 19-year-old Mercedes Haefer are also facing obscene amounts of jail time relative to the crimes they've committed – which experts agree can be compared to real world acts of civil disobedience, such as a sit-in.

Congress is discussing Aaron's Law now and investigating the circumstances under which a 26-year-old could have been pushed over the edge. But the president has been silent on Swartz and other hackers since his death.

That said, the President "tried to expand CFAA as part of its 2011 proposal to Congress on cybersecurity reform," according to Politico, which called the silence from the administration "noteworthy"

Freedom on the internet and the free flow of information therein are basic human rights, according to the member states of the United Nations. Obama's administration is sliding down a slippery slope there may be no coming back from.