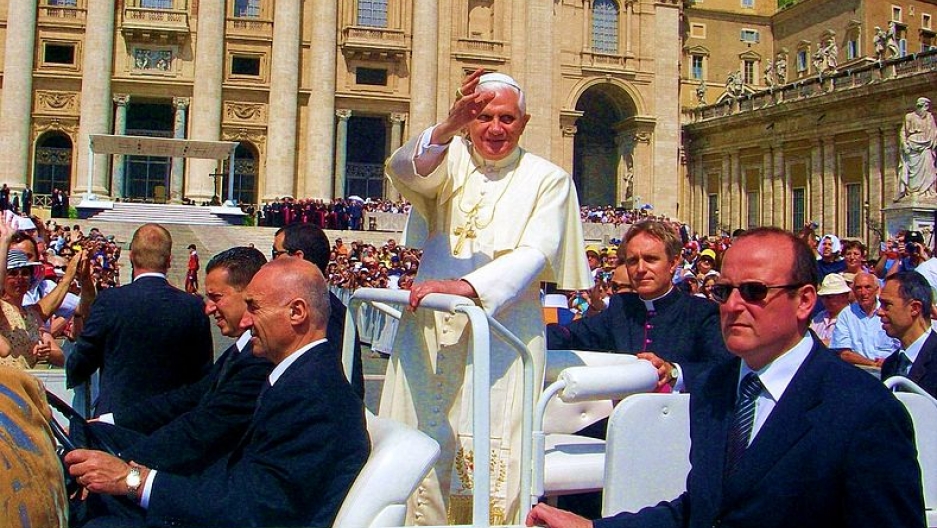 Pope Benedict XVI greets those in St. Peter's Square in the Vatican in 2007. (Photo by Marek Kośniowski via Wikimedia Commons.)

Pope Benedict XVI, the 85-year-old leader of the Roman Catholic Church, announced on Monday that he would resign his post after less than eight years — an unprecedented step in the modern papacy.

The former Cardinal Joseph Ratzinger, Benedict cited a decline in a strength of his mind and his body in determining that he could no longer serve as pope, effective at month's end.

"After having repeatedly examined my conscience before God, I have come to the certainty that my strengths, due to an advanced age, are no longer suited to an adequate exercise of the Petrine ministry," he wrote. "I thank you most sincerely for all the love and work with which you have supported me in my ministry and I ask pardon for all my defects."

Benedict's term as pope has always been in the shadow of the popular, and long-serving, John Paul II, who traveled more than any pope that preceded him. And while Benedict also traveled a fair amount, his travels declined in recent years. His papacy has also been marked by the priest sexual abuse scandals, which have badly damaged the church in the United States and in Europe in particular.

It's also been a time where the church finds itself having to justify its place in a world where religious life increasingly is being pushed out of people's lives.

Federico Lombardi, the Vatican spokesman, told The New York Times that a successor was expected to be named by Easter, which is on March 31 this year.

The last pope to resign was Gregory XII, who served from 1406 to 1415. His resignation was part of a pre-determined series of events that ended a period where there were multiple men claiming to be heirs to the papacy, known as the Western Schism. The last time a pope voluntarily abdicated his position was even further back in history — in 1294, Celestine V stepped down.

Benedict's resignation prompted several statements of praise from other religious leaders. In his own way, Benedict has endeavored to repair and reinforce relationships with leaders of other faiths. His visit to Turkey early in his papacy was meant, in part at least, to help heal divisions with the eastern orthodox church. At the same time, however, he's often found himself at odds with the world's Muslims.