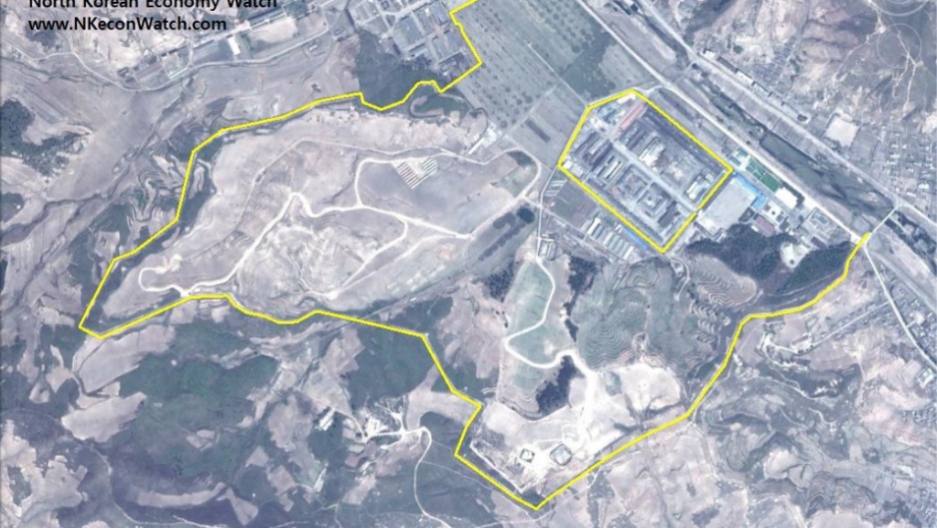 This Google Earth image from the North Korean Economy Watch blog shows the Kwan-li-so 25 labor camp as of May 18, 2012. Blog author Curtis Melvin writes that if you compare this with a 2006 photo of the same area, "the security perimeter has been expanded on nearly all sides" and there are "additional guard posts around the perimeter."
Credit: DigitalGlobe
Share

The images suggest the expansion of a prison camp ("a kwan-li-so") in the North Korean mountains, according to blog author Curtis Melvin, an economics PhD candidate at Virginia's George Mason University, who has visited the isolationist country twice.

Melvin compared recent pictures of the area with those taken in 2012 and described the changes:

There has also been quite a bit of construction within the facility. The entrance to the compound has been moved to the main road. A few of the buildings have been renovated. There also appears to be a new green house.

North Korea is believed to run six penal colonies reserved for political prisoners, where Amnesty International says an estimated 200,000 prisoners — who've fallen afoul of party ideology — are sentenced to hard labor in mines and on farms.

International organizations report horrific conditions that include torture, rape, forced abortions, and the like.

Navi Pillay, the UN's human rights chief, made a rare statement against the North Korean prison camps on Monday. She called for an international investigation into what "may amount to crimes against humanity," The Guardian reported.

But why, if these camps have been operating for decades, are they only raising eyebrows now?

Part of the reason is that cartographic impressions of North Korea were previously hard to come by — until recently, when Google released a detailed map of the hermit state.

Of course, as the NY Times writes today, "the only people on earth who can’t see Google’s map of North Korea and comment on its features are the North Koreans." (And were they to comment, would they write “Hands down, my favorite gulag"? Somehow I doubt it.)

Another reason the prison camps are getting a lot of attention now has to do with Shin Dong-hyuk, a human rights activist, who is the only political prisoner known to have been born in one of these camps and to have escaped.

In his colony, prisoners were almost always handed life sentences and lived to their 40s.

Though controversial, that book helped bring the prison camps back into the public eye.

"Then, the leadership transition to Kim Jong-un and his planned nuclear launch only added to the world's gaze on North Korea," reports GlobalPost's Cain from Seoul.

To top it off, China is getting fed up with its rambunctious neighbor and threatening to cut off aid should Pyongyang move forward with a nuclear test.

"So there you have it," said Cain, "the perfect recipe" for UN's Pillay to make a rare statement — even after the UN has stayed silent on the issue for a decade.