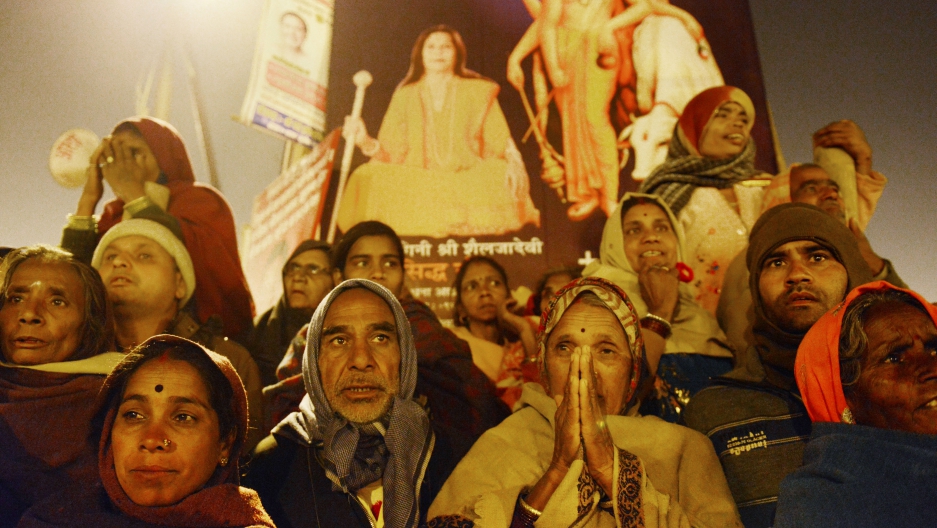 Indian devotees watch as 'naga sadhus' or naked holy men march in a procession towards the Sangam or confluence of the Yamuna, Ganges and mythical Saraswati rivers at the Kumbh Mela in Allahabad on February 10, 2013. Tens of millions of Hindus gathered Sunday for a holy bath in India's sacred river Ganges on the most auspicious day of the world's largest religious festival. Ash-smeared naked saints led the ritual bathing before dawn, which is said to cleanse pilgrims of their sins, with millions following them into the swirling river waters at the festival site in Allahabad in northern India.
Credit: Roberto Schmidt
Share

Traditionally journalism has not had a good ear for the music of faith, and too often news organizations have done a poor job reporting on religion. After all, it's difficult to explore the facts of who, what, where and when as you are traveling the terrain of faith and covering the set of beliefs that make up a religion. And yet these religious beliefs are an undeniably powerful force in shaping the world around us.

"It's almost impossible to understand world events today without an appreciation for the role religion plays both on the diplomatic level and on the street," said Diane Winston, the Knight Chair in Media and Religion at Annenberg. "People's beliefs impel them to make war, seek peace, and give their lives in God's name. When reporters treat religion as a subset of politics, they miss the heart, soul and strategy behind the news."

Today GlobalPost 'Special Reports' sets out on a new initiative to cover religion around the world with generous support from the Henry Luce Foundation and a valued partnership with the USC Annenberg School for Communication and Journalism. We hope you'll join us on our reporting journeys to better understand the religious beliefs of Christianity, Islam, Judaism, Buddhism, Hinduism and the many other expressions of faith that shape the lives of individuals and impact the way so many societies govern themselves.

In this new blog titled "Belief," we will be working on a more daily basis to tell stories, to uncover trends and to explore ideas around the world about religious beliefs — from the Old City of Jerusalem where the three Abrahamic faiths share overlapping sacred space to the Buddhist monasteries of Myanmar; from the fiery Pentecostal movement in South America to the rock steady churches of South Africa; and from the polished marble corridors of the Vatican to Hinduism's holy waters of the Ganges.

We will explore the often contentious interplay of secular and religious beliefs, aware that many around the world reject religion altogether and that many more define themselves as "spiritual" or "religious" but are unaffiliated with any religious institution. This blog and the Special Reports that will grow out of our reporting will have an ear to the ground for all of these beliefs.

By partnering with Winston and Annenberg, GlobalPost is able to tap into a rich international network of expertise about the role of religion in world affairs, strengthening the reporting with a diverse range of insights. As always, we invite conversation and critique along the way.