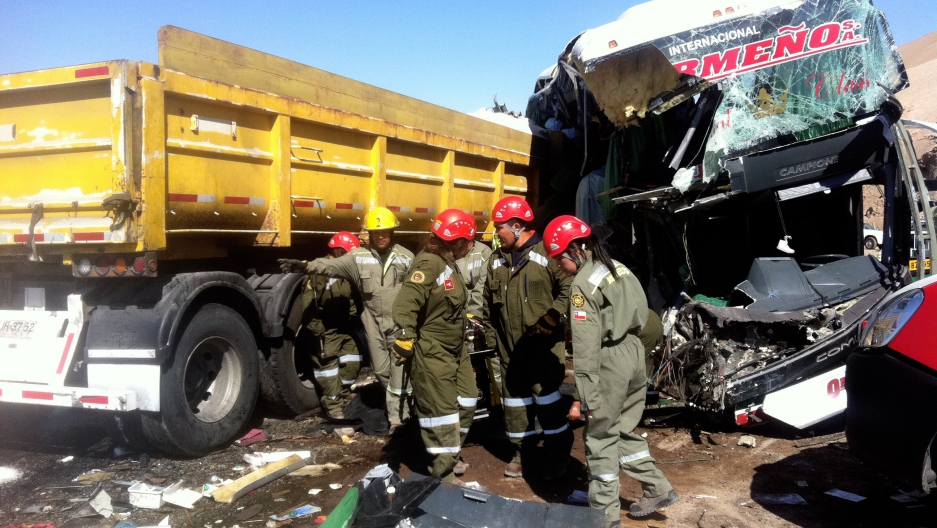 Rescuers work on November 5, 2012 on the wreckage of a bus that collided with a lorry on Route 5 North in Antofagasta, 1400 km north of Santiago killing at least six Peruvian nationals.
Share

Sixteen young football fans were killed and 21 injured when their bus plunged down a ravine in Chile.

The group, aged 13 to 18, were on their way home from a football match early Saturday when the crash happened.

Fire department officials said among those killed was a baby, AP reported.

Officials said the bus lost control and plunged about 500 feet (150 meters) into a ravine in a mountainous zone about 280 miles (470 kilometers) south of the capital.

State television alleged the Chinese-made bus had no seatbelts for its 27 intended passengers and was classified only for urban use. It was carrying 45 people at the time of the tragedy.

The accident occurred at about 2 a.m. when the driver lost control on a mountain road near the town of Tome, Felipe Martinez Parra, a regional police officer, told CNN.

The group were all fans of the O'Higgins soccer team, from the city of Rancagua.

They were in a celebratory mood after watching a match in Talcahuano where their team defeated the hometown team, Huachipato, 2-0.