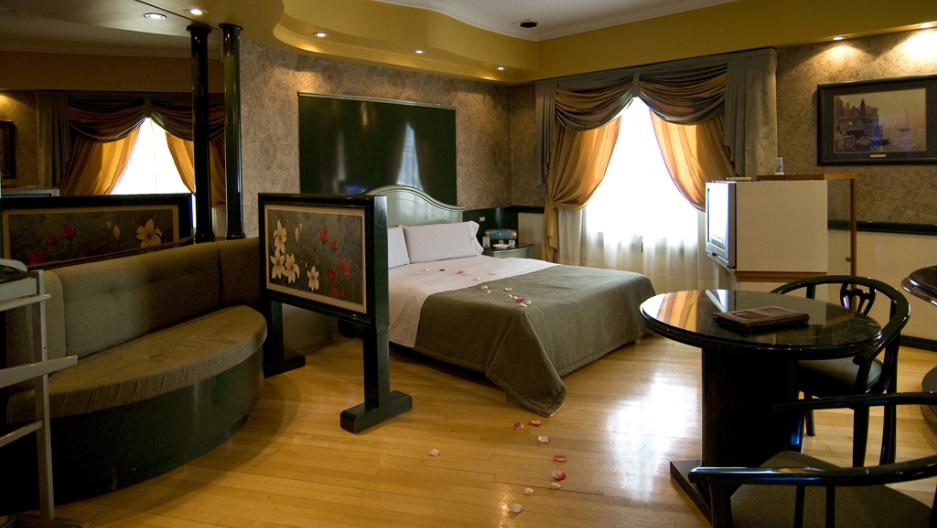 BUENOS AIRES, Argentina — From Venezuela to the Dominican Republic via Brazil, the Latin “love hotel” reigns supreme — bright lights, cupid arrows and faux-Roman columns leave the prospective punter in no doubt about the services on offer.

In Argentina’s capital, however, things are a little different.

The love hotel, or “telo” as it’s known in local slang, is a more understated affair. Legislation in Buenos Aires has banished flashing neon in favor of a humble sign bearing the name of the hotel and two key words, “albergue transitorio,” or transitory hotel — a reference to the fact that guests can pay by the hour.

The seedier side of telos is much publicized: a place for prostitution, infidelity and teenage kicks away from prying parental eyes.

But for Juan Carlos Dominguez, manager and investor at Torres del Lago, there’s much more to these establishments than the oft-cited cliches — and an important top-end market out there to be tapped. (Photos courtesy of Torres del Lago.)

“The idea of our hotel is to offer a different sort of atmosphere and get away from the shady side [of love hotels] where it’s just about having sex,” he says. “We offer a different experience, with different decoration, unlike a traditional love hotel where the focus is very obvious — a bed and some red lights.”

Torres del Lago is located just beyond the city limits in Lomas de Zamora. The hotel, which has 40 rooms, is set within a palm tree-lined estate covering 8.6 acres and claims to be the largest establishment “for couples” in South America.

Rooms are spacious and thematic, with extras that include everything from jacuzzis to pool tables and mini bowling lanes. There’s also an extensive 24-hour food menu.

Although the law is less stringent on advertising in Greater Buenos Aires, where the hotel is located, Dominguez is in no rush to erect winged cupids. And while many love hotels have traditionally been geared toward men’s needs, Torres del Lago has purposely steered its marketing toward females.

“Our idea was to focus the hotel towards women,” adds Dominguez. “Women have other ideas [than men] about relationships and sex. A woman needs a distinct atmosphere, more stimuli, affection and space.”

Of course, shirking off the prostitution association isn’t always easy — especially as Torres offers short stays, two or three hours starting at 270 Argentine pesos, or $54. But Dominguez is keen to point out that married couples come here to get away from it all in a city where living spaces are shrinking.

Torres del Lago is one of about five hotels in its category that have opened in the last decade, according to Dominguez, offering more than just a place to have sex. But it doesn’t sell like it used to, the manager admits, a far cry from the 1970s and 1980s when telos were at the height of their popularity.

Dominguez inherited his trade from his father, whom he began to follow around the “hotel alojamiento” (another term for a by-the-hour hotel — he admits the word “telo” chokes him) when he was just 6 years old.

The family element is still clearly important today. Talking with GlobalPost, his 15-year-old son Santiago sits in on the interview, looking thoroughly bored as his father discusses sex with a foreign journalist.

There are currently about 165 love hotels in the capital — 15 fewer than a decade ago — according to the Accommodation Proprietors Association, and some 280 in the Greater Buenos Aires area.

The relative decline in telos’ appeal can be measured by changing social attitudes. Alongside Uruguay, Argentina is far more secular and liberal than many of its regional neighbors and sexual relations before marriage is the norm in a country where many people live at home until their late 20s or 30s.

“Certain fears associated with sex and sexuality are beginning to disappear,” explains Buenos Aires-based sexologist Mariela Rizzo, referencing the country’s same-sex marriage law that was passed in 2010. “People no longer think there’s something dirty behind talking about sexuality and it’s become a positive thing.”

While local media outlets fill news reports with tales of growing crime levels, many parents would rather their children have relationships at home and not out of sight, according to Dominguez, something Rizzo agrees with.

“Many parents prefer that their children bring their boyfriend or girlfriends home,” she says. “They know where they are and that they’re safe, so they open the space to them, no matter the consequences.”

Taking a tour around the different rooms at Torres del Lago — from the triplex with a private glass elevator between the two floors (think about it) to the more basic four-star room — everything seems planned to ensure the guest never has to see a staff member or another couple from the moment they check in.

Being an hotelier in Argentina may not be easier than in other Latin American countries. Dominguez says he has to raise prices about three times a year due to unofficial inflation rates of 25 percent.

But for Juan Rodriguez, who says he’s visited telos in the past to keep a relationship fresh, these types of establishments are here to stay.

“I think it’s good that spaces like this exist,” the 32-year-old says. “For me, telos in Argentina will never go out of fashion.”

More from GlobalPost: Brazil has a love hotel for dogs