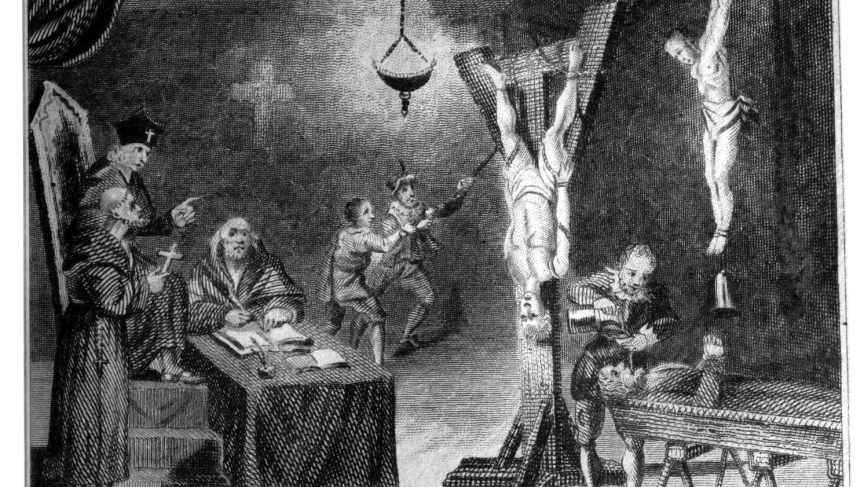 Vintage engraving from 1807 showing people being tortured during the Spanish Inquisition.

Spain's Justice Minister, Alberto Ruizo-Gallardon, announced the offer to descendants of Spain's former Jews in November at a Jewish center in Madrid.

"In the long journey Spain has undertaken to rediscover a part of herself, few occasions are as moving as today," he said. "The measure we're announcing will let anyone who can prove their Sephardic origins obtain Spanish nationality."

In 1492 the Catholic Kings Ferdinand and Isabela, expelled the Jews from what is now modern day Spain. Those who stayed were forced to convert to Catholicism.

Some 200,000 chose to leave. More than five centuries later, very few have come back.

Today in Spain there are only some 40,000 Jews. The head of the Spanish Federation of Jewish Communities told Spanish TV that the new offer of immediate citizenship for descendants had created a buzz in Jewish communities around the world.

"I can tell you that in less than a month we have received about 6,000 inquiries, among which I would highlight one from an American member of Congress," he said.

A spokeswoman for the Federation could not say who that Congressman was. But one American who has looked into the possibility of becoming Spanish is Doreen Carvajal, a reporter with the New York Times in Paris.

Some years ago she learned she had Sephardic Jewish roots. She began to investigate, even moved to Spain and wrote a book about her experience, called "The Forgetting River."

"My initial reaction was that it was a really thrilling moment," Carvajal said. "That it was an act of justice. They held this news conference with top ministers to offer automatic citizenship to descendents of all Sephardic Jews who left during inquisition. Point blank done. 363 It was a romantic notion on my part. I told my husband, I think I'm going to try and get the passport because it closes a circle. It was very poetic," Carvajal said.

But Carvajal says that when she contacted Spain's Jewish Federation, she learned she didn't qualify. Not yet anyway.

Part of Carvajal's family was Sephardic Jew. But when they left Spain for Costa Rica, they converted to Catholicism, at least officially, out of fear of Spanish Inquisitors. The Inquisition hunted down and persecuted Jews even in the far-off Spanish colonies.

So, Carvajal is technically the descendent of converts or, conversos. She's not a practicing Jew herself. She says she was told she'd have to convert to become Spanish.

"I felt like another it was act of being forced," she said. "Here are the these people, the descendents of the anousim, the forced ones, the conversos, being told you have to do this, you have to be a certain religion? So what happens if you're a secular Jew? It was a bittersweet moment for me when I realized there were a lot of clauses there and it really wasn't an automatic offer for everyone."

Isaac Querub, the president of Spain's Jewish Federation, did not respond to multiple requests for interviews. Nor has Spain's Justice Ministry commented on why some descendants are excluded from the citizenship offer.

Carvajal says she's been left to wonder whether Spain just wants to attract Jewish wealth, from known Sephardic enclaves that have survived in place like Venezuela and Turkey.

Maria Josep Estanyol, an historian on Jews at the University of Barcelona, says she's not sure why Spain is splitting hairs now. But she says it is well known that when Spain expelled the Jews in 1492 it had disastrous effect on the economy.

Many Iberian Jews were wealthy textile traders and jewelers and bankers.

"At the time of the Ottoman Empire, the Sultan was said to have commented that he couldn't understand why a great Spanish king like Ferdinand would go without the Jews, who were such a source of wealth, and just give them to him. The Sultan was very pleased to receive these Jewish families, who went on to enrich his empire," Estanyol said.

In theory, enticing them back now might give a boost to Spain's shrinking economy. Although, Estanyol doubts many families would reestablish roots in Spain.

"Given how disastrous things are here today, I'd advise against it," she said.

It's also been suggested that Spain made the offer to appease Israel, after Madrid supported last year's successful Palestinian bid for a seat at the United Nations.

Whatever the motivation, some Muslim scholars are denouncing the offer as unfair. They point out that their ancestors were expelled from Iberia too, just a few years after the Jews. But no one's inviting them back.