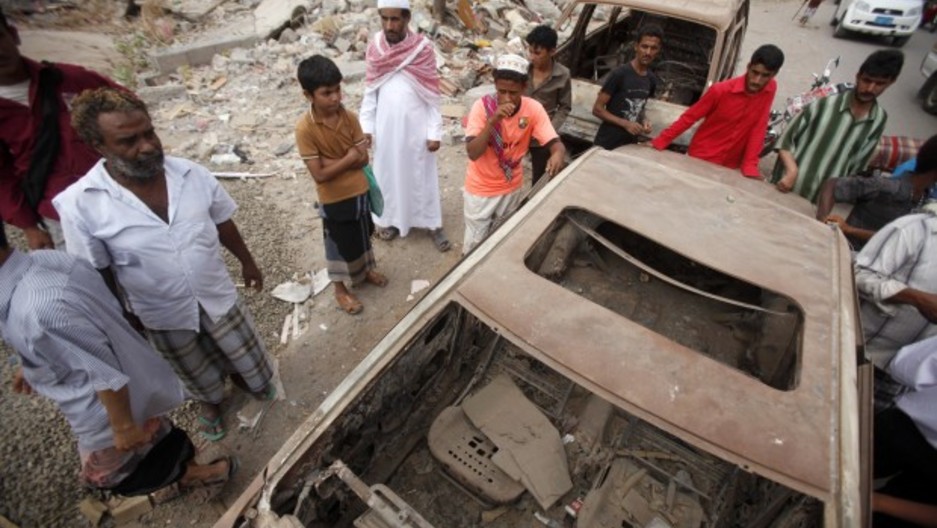 People gather around vehicles destroyed by an air strike last year that was targeting al Qaeda-linked militants, in the southern Yemeni town of Jaar February 1, 2013. U.S. drones have launched almost daily raids on suspected al Qaeda militants in Yemen during the past two weeks, and air strikes have aggravated discontent among Yemenis, who say the strikes pose a threat to civilians. REUTERS/Khaled Abdullah (YEMEN - Tags: POLITICS CIVIL UNREST MILITARY) - RTR3D8FG

John Brennan, the chief architect of the US drone program, faces a Senate confirmation hearing Thursday for his nomination as the CIA's new director. The Congressional hearing will be one of the few times Americans will hear a high level official publicly acknowledge and address the military and CIA's joint drone program. It operates in countries like Pakistan, Somalia and Yemen where the US is not at officially at war, but has conducted hundreds of attacks using drones in covert operations.

Down a dimly lit corridor, in the only burn-unit hospital in Yemen lie the severely burned bodies of Sultan Ahmed Mohammed and Nacer Mabkhout al-Sabooly. They're conscious, but barely able to speak out loud. Sultan, tells me his name and mutters just one sentence before closing his eyes.

I met the two last September. They were victims of an attack that officially never happened. At the hospital, Abdelrahman Barman, an attorney who runs the Yemeni human-rights organization Hood, that advocates for the rights of drone victims, explained to me how this mini-bus driver and his cousin from a rural town in Central Yemen ended up barely conscious in a hospital in Sanaa.

"There was a mini-bus full of 14 people, including a woman and her two children," Barman said. "They were headed to the city. Two of the airplanes-without-pilots arrived, one of them came low enough that the passengers of the bus could see it, and it released the first missile. After it hit the car there were still some people alive, and then the second missile was launched and it killed everyone except three.

Immediately after the strike the Yemeni government announced that it had killed al-Qaeda militants. Families of the civilian victims, in coordination with Hood, threatened to bring the burned corpses of the victims — which included two children and their mother — to the presidential palace. Soon after, the Yemeni government changed its tone. An official from the President's office called the strike an "accident."

This was a rare confession by Yemeni officials. But the US government has never officially acknowledged its role in conducting any drone strikes in Yemen, much less disclosed how many civilians have been killed. But according to the Bureau of Investigative Journalism, drones have killed more than 1,100 people in Yemen alone.

But no one's really sure. "Yemenis feel that they're no longer feel safe in their homes, roads and marketplaces," said Ibrahim Qatabi, a Yemeni-American human rights activist and a legal worker with the Center for Constitutional Rights in New York.

He said that while its difficult to know for sure the number of civilians killed, one thing is certain: the impact the program has had on life in general in places like Southern Yemen, where drone strikes can occur weekly, is profound.

"They (Yemenis) have the feeling that any of them can be killed at any given time for crimes they didn't commit, that there's no rule of law that can protect them. They feel unsafe," Qatabi said.

Many critics of the US' covert drone program say people in Yemen today live with a collective sense of insecurity, waiting for disaster to rain down on them from the heavens at any given time.

And that, said Naureen Shah, tears apart the fabric of society. She's director of the Human Rights Clinic at Columbia University Law School, and author of a report called "The Civilian Impact of Drones."

"People are afraid of sending their children out to go to school, they're afraid of going outside and maybe engaging with the community because of that fear. There's a deep psychological impact on people because of the sound of drones flying overhead," Shah said.

Under international law, governments are supposed to investigate attacks that kill civilians. But because the drone program in Yemen doesn't officially exist, the US doesn't acknowledge the strikes. So, no drone strikes, no dead civilians, and no compensation to survivors or the families of victims.

As a result, Ibrahim Qatabi said Yemenis lash out, looking for justice.

"What happens usually if the tribe is strong enough they will block roads to main cities, prompting the government to send some sort of mediator or government official and tribal leaders to go and work out some deals with the families of the victims," Qatabi said.

Qatabi said that oftentimes, tribes who never had any affiliation with Al-Qaeda or any animosity towards the United States, may attack US targets to avenge the killing of their family members. Many in Yemen say that the drone war is having the effect of creating more militants than it is killing.

That point is hotly contested in the halls of Washington. But Naureen Shah, of the Columbia University Law School, said what is certain is that in places where drones are used regularly, people believe the US views their lives as disposable.

"Because the program is not being acknowledged because there's no recognition of the harm people come away with nothing," she said. "We're not just talking about losing the chance at compensation, but possibly offering some dignity and recognition to the families that have been left devastated."

Nacer can relate. He's the mini-bus driver who survived the September 2nd drone strike in Walid Rabiaa that killed 12 civilians. His legs were so badly burned in the strike that he can no longer drive, or earn a living.

I recently reached Nacer's brother by phone in his village in Central Yemen, to see how the survivors were getting on with life. Ahmed al-Sabooly told me that the Yemeni government provided Nacer and Sultan with just enough money to travel to Egypt to get treatment for their injuries, but not much else has been done since then.

Thank God they are okay now," Sabooly said. "In terms of their health, they survived, but they of course feel they have been oppressed. We still don't know why they were targeted. It was a complete shock, and no one knows why this happened except for God."

A person involved in criminal things should be afraid, he told me, but an innocent person shouldn't have to live in fear like this.