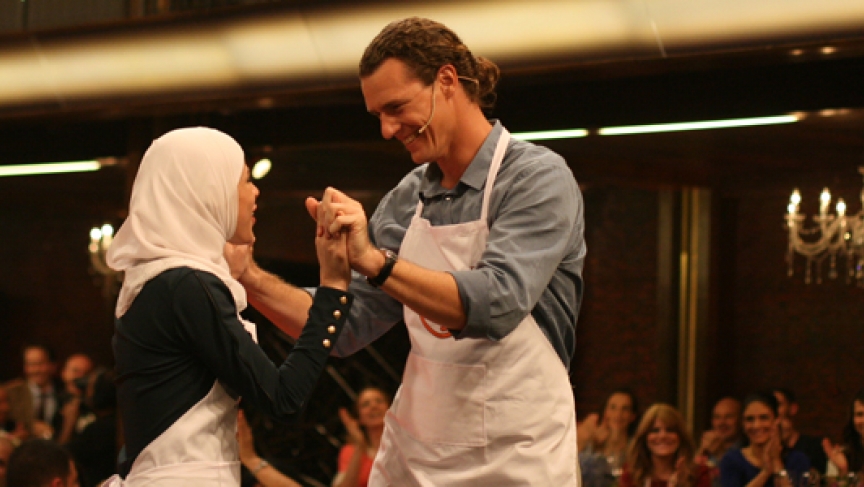 Share
The Israeli version of the reality show MasterChef just wrapped up. The grand finale was the highest rated TV program ever in Israel. It featured a run-off between an orthodox Jew, an Israeli -Arab and a German convert to Judaism — three people who in regular life wouldn't be near each other. Reporter Daniella Cheslow has the story. It's the last episode of the Israeli version of MasterChef. The reality TV show pitted 14 amateur chefs against each other. The three remaining contestants sound like a bad joke: Tom Franz, a lanky German convert to Judaism; Salma Fiyoumi, an Israeli-Arab Muslim woman, and Jackie Azoulay, an orthodox Jewish woman in a long blonde wig. For Franz, tonight's a chance to prove more than his knife skills — it's a way to finally arrive in Israel. He came here as a high school exchange student and later returned as a volunteer in a hospital. Almost nine years ago, he took the plunge and moved to Israel, converted to Judaism, learned Hebrew and married a Jewish wife. "I had some hard time in the beginning to find my way here and to get accepted," Franz says. "I don't know if I need to win the MasterChef competition to accomplish this. But it would be like finishing this long journey of arriving to Israel." Part of the journey was adapting to keeping kosher, a set of dietary laws observant Jews follow in the kitchen. "The hardest is to give up the mixture of meat and dairy. It's not so easy, there's lot of things you have to take care of," he says. Tom's wife Dana signed him up for the cooking competition, and he was shocked to make it past auditions. "The day after the audition, I understood I was going to competition," Franz said. "I said I would take it seriously, I bought best books I could find, and from that day I read two or three hours every day and spent an hour in kitchen." Tom quickly stood out in the competition for his impeccable technique, perfectly chopping his vegetables and arranging them meticulously on a plate. German dishes were at the forefront of his first few meals. For one, he made a smoked salmon quiche. For another, a long roll of stuffed cabbage. It was his comfort food, but European food is looked down on in Israel, where the national palate is more attuned to Mediterranean staples, like fresh herbs and grilled meats. Eyal Shani, a chef and one of the four judges, urged him to roast his vegetables. "Tom has got a very European cooking," Shani says. "But you know sometimes the European cooking can make you to be blind to the ingredients because it's very complicated. All the same, the judges appreciated his technique. "Tom is the only competitor who uses a timer when he enters the kitchen," says another judge, Michal Ansky. "He knows exactly the temperature of the water when he cooks potatoes. He is accurate in a way that only a German can be. As the season wore on and Tom survived elimination rounds, he moved more toward Mediterranean dishes. His couscous wowed the judges. His trout and potatoes blew away Judge Shani. "That was one of the best that I ever ate in my life," Shani says. "It was real potato and real trout, they were talking between themselves." In the final episode, Tom found himself in the middle of an unlikely cross-section of Israeli culture. Salma Fayoumi, the nurse from an Arab village, fused traditional Palestinian dishes with Mediterranean flavors. Jackie Azoulay, the Orthodox woman with Moroccan roots, made north African standards. Halfway through the finale, Jackie was eliminated and Tom and Salma faced off. Tom blackened eggplants and red pepper. He smashed the eggplants into a cream and spread it on a long white plate. On top of that he placed slices of sirloin steak rubbed with a red pepper paste. Finally he put tiny potato cubes across the eggplant cream. It was a marriage of his European roots — the potato, the precise slicing, the careful plating — and his new Israeli home. "What I did in life is I left Europe and I went to Israel," Franz says. "And in my cooking, I left Europe and went to Israel." His final dish went head to head against Salma's beet and spinach pasta. The judges gave their verdict. "The MasterChef of Israel is … Tom," one of the judges announced. The final of MasterChef was the highest rated reality TV episode of all time in Israel. At its peak, the program pulled in more than half of Israeli Jewish households. For Tom, it was a much more personal victory. Ich fÃ¼hl' mich wunderbar – I feel wonderful – I made a dream come true.