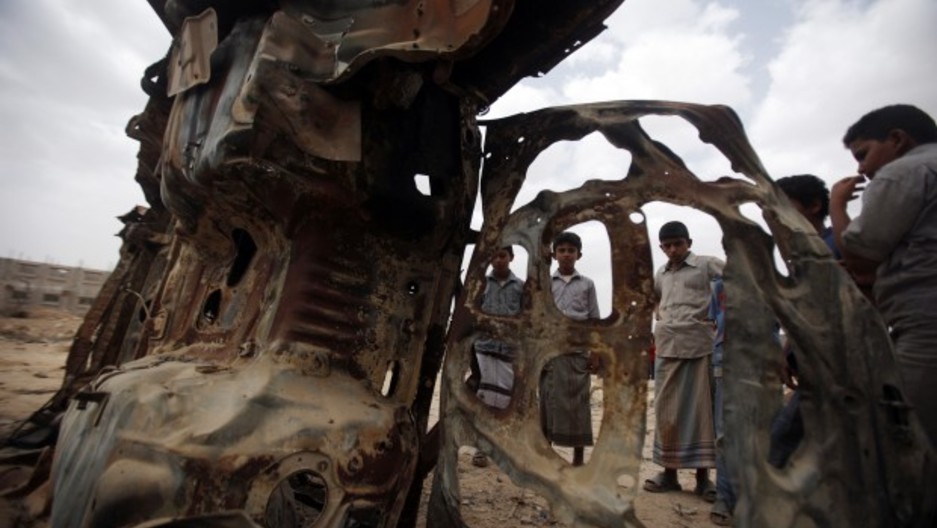 Boys gather near the wreckage of car destroyed by a US drone air strike targeting suspected al Qaeda militants in the southeastern Yemeni province of Shabwa, February 3, 2013.

Share
A leaked Justice Department memo is the talk of the town in Washington, and around the globe, Tuesday. The memo, obtained and published by NBC News, sets out the Obama Administration's legal case for the targeted killing of American terrorism suspects abroad. In the past, at least one such targeted killing was carried out by a drone strike. The document said it is lawful to kill a United States citizen abroad who is a "senior operational" leader of al-Qaeda or a related group, and that it would be lawful to kill an American citizen who poses an "imminent" threat to the United States. "And of course most citizens will say, 'Well what is an imminent threat?'" said Gary Solis, an adjunct professor at Georgetown University Law Center. "The answer is we don't know in the abstract." Solis said the memo obtained by NBC continues an ongoing debate about targeted killings, but provides little new guidance. For example, the memo says the US government "could use lethal force in a foreign country outside the area of active hostilities." "And that too is part of the problem in that the battlefield is undefined," said Solis. "We know that Afghanistan is a battlefield, one can reasonably say that Pakistan is a battlefield. But is Yemen a battlefield? Is Somalia a battlefield?" In a place like Somalia, there's no government the US can turn to and say we need you to arrest and extradite this individual. So, Solis asks: Is it not reasonable then to attack an American citizen on foreign soil who poses an imminent threat to American interests? And where could that attack take place? "I mean if he's in Paris, if he's sitting in a sidewalk café drinking coffee, clearly we cannot attack him there because France has a working judicial and political system through which we can work," said Solis. "But if he's in 'blue land' or 'red land' or something like that where they don't have a functioning government, what then?" Objections to the Memo Jameel Jaffer with The American Civil Liberties Union said he's not comfortable with the guidance the administration is offering in this memo. "The bottom-line is that the executive branch can carry out these targeted killings without ever presenting evidence to a court or even acknowledging to a court or to the public that the authority they're claiming has been used. And that really is a pretty chilling proposition." Jaffer said the memo is filled with vaguely stated limits that are easy to manipulate. For example, he said the category of people the government claims it can kill is too broad, including not just people who present an imminent threat, but people who pose a continuing threat. "It's a phrase that in the administration's view, no court is going to have the opportunity to interpret. And whatever 'continuing threat' means, it's the administration that will get to decide." And Jaffer said remember, this is not just about what the Obama Administration could do. "Even if you trust this particular administration with this power, and I'm not saying you should, but even if you do, this is a power that will be available to the next administration, and it will be available in every future conflict." Is Targeted Killing A Good General Strategy? The topic of targeted killings is sure to get much more attention in the days ahead. President Obama's pick to head the CIA, John Brennan, has his Senate confirmation hearing scheduled for Thursday. Brennan was the first official in the Obama administration to publicly acknowledge drone strikes last year. He called them "consistent with the inherent right of self-defense." Bill Martel, an associate professor of international security studies at the Fletcher School at Tufts University, said he's comfortable with the executive branch making snap decisions to protect American interests. But he wants the process more clearly defined and transparent. "I would like to think in the course of things that we'd have courts that are reviewing this. I like further to think that Congress would be involved in those kinds of decisions," sad Martel. "It's interesting that Congress, according to reports, received this document back in June."