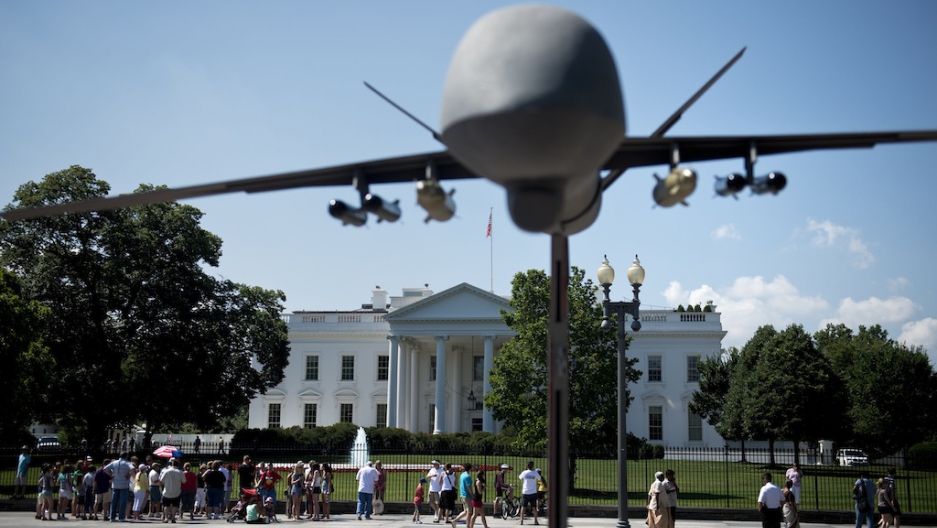 A model of a drone on Pennsylvania Avenue outside the White House on June 23, 2012 in Washington, DC.
Credit: Brendan Smialowski
Share

The memo, published Monday by NBC News, reveals new information on the secretive anti-terrorism policy of President Barack Obama, and offers a glimpse of the legal thinking behind a highly controversial issue.

The undated and unsigned 16-page document aims to "set forth the legal framework" for taking down US citizens thought to be Al Qaeda "senior operational leaders" or part of an "associated force."

Media reports have cited this example: a September 2011 strike in Yemen killed Anwar al-Awlaki and Samir Khan, both Al Qaeda suspects and US citizens who had not been formally indicted by the US government with crimes.

“This is a chilling document,” said Jameel Jaffer, deputy legal director of the ACLU, a rights organization currently suing the government to acquire documents on the killing of US citizens. “Basically, it argues that the government has the right to carry out the extrajudicial killing of an American citizen. … It recognizes some limits on the authority it sets out, but the limits are elastic and vaguely defined, and it’s easy to see how they could be manipulated.”

Obama's nominee for CIA director, John Brennan, and Attorney General Eric Holder have spoken publically on the issue before.

The memo is partly based on arguments made by Holder in a speech at Northwestern University in March 2012. But, according to NBC, the memo introduces more expansive parameters for justifying an attack on a US citizen.

For example, the memo refers to what it calls a “broader concept of imminence.”

“The condition that an operational leader present an ‘imminent’ threat of violent attack against the United States does not require the United States to have clear evidence that a specific attack on US persons and interests will take place in the immediate future,” the memo states.

Under such reasoning, a high-level US official may then target a US citizen who, as the memo states, has been "recently" involved in "activities” that threaten a violent attack. NBC notes the memo does not clearly define "recently" or “activities.”

The memo also states targeted drone strikes against US citizens do not break a US law that bans assassinations.

“A lawful killing in self-defense is not an assassination .... In the Department’s view, a lethal operation conducted against a US citizen whose conduct poses an imminent threat of violent attack against the United States would be a legitimate act of national self-defense that would not violate the assassination ban. Similarly, the use of lethal force, consistent with the laws of war, against an individual who is a legitimate military target would be lawful and would not violate the assassination ban.”

The memo builds on past prerequisites put forward for the targeted killing of a US citizen. They are, according to Gawker:

1) The above very vague definition of "imminent threat"
2) That the capturing of the target is decided to be "infeasible"
3) The attack must be done within the "law of war principles."

It's important to note the memo, or "white paper," as it's also known, is not an official legal memo. However, as Gawker points out, it may reflect classified documents used by the Justice Department's Office of Legal Counsel.

Also on Tuesday, Republican and Democratic senators wrote to President Obama asking for the legal justification for the killing of US citizens.

“It is vitally important, however, for Congress and the American public to have a full understanding of how the executive branch interprets the limits and boundaries of this authority,” the letter read, “so that Congress and the public can decide whether this authority has been properly defined, and whether the President’s power to deliberately kill American citizens is subject to appropriate limitations and safeguards.”

News of the memo and the bipartisan letter follow a Monday ruling by the European Court of Human Rights to declassify documents related to a CIA prison, or "black cite," in Poland.

It's thought the documents will reveal how Poland tried to avoid filing information about the existence of its CIA prison, according to Polskie Radio.

Polish Justice Minister Jaroslaw Gowin said Tuesday he was “very disturbed” by the court's ruling, which was announced Monday. He called it a “threat to Polish security.”

In addition, a report released Tuesday by the Open Society Justice Initiative is said to reveal new information about the CIA prisoner rendition program that involved more than 50 countries in Europe, Asia and Africa.

"By engaging in torture and other abuses associated with secret detention and extraordinary rendition, the U.S. government violated domestic and international law, thereby diminishing its moral standing and eroding support for its counterterrorism efforts worldwide as these abuses came to light."

The view from the EU

The interest has been fueled partly by Obama's appointment of Brennan, but also by a number of high-profile cases and the buzz over the CIA-themed movies "Argo" and, in particular, "Zero Dark Thirty," with its portrayal of torture by agency operatives.

In December, the European Court of Human Rights for the first time ruled that the CIA had been guilty of torture in the treatment of a German citizen wrongly suspected of terrorism and held illegally in Macedonia.

And last week, an Italian court sentenced the CIA's former Rome station chief to seven years for his role in the kidnapping of an Egyptian Muslim cleric. Prosecutors in Milan are also seeking to convict the head of Italy's own intelligence service for involvement in the kidnapping.

The continued sensitivity of the issue is shown by reaction to the OS report in countries from Romania to Ireland, and in the Polish government's concern that security could be threatened by moves from the European Court of Human Rights to declassify documents in a case involving a Saudi national who says he was detained in the country from 2002 to 2003.