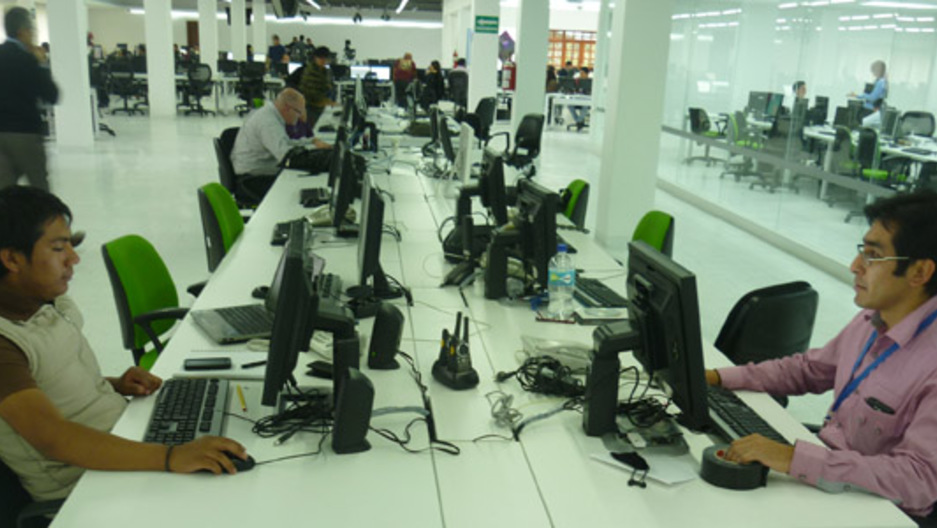 In the South American nation of Ecuador, President Rafael Correa is heavily favored to win a third term in the February 17 election. But if he does, it could mean four more years of trouble for the Ecuadorian media.

Correa is targeting TV, radio and newspapers with lawsuits, fines and insults. All this from a president who offered political asylum to Wikileaks founder Julian Assange in the interests of freedom of expression. Now press freedom groups describe Ecuador as one of the hemisphere's most restrictive nations for the media.

"There was more press freedom under Ecuador's military dictatorship in the 1970s than there is today under the democratically elected government of Rafael Correa," according to veteran journalist Miguel Ribadeneira, who heads one of Ecuador's largest radio stations.

"This government is the worst."

Since he was first elected in 2006, President Correa has complained about sloppy, unprofessional journalism. He claims many of the country's newspapers, television and radio stations are dominated by corrupt elites who try to undermine his left-wing government.

"Many in the media have crossed the line into political activism, and that has prompted a political response from the president," said Patricio Barriga, a government spokesman.

Correa is an ally of Hugo Chavez, Venezuela's ailing president, who has clashed with the Venezuelan media during his 14 years in power. But critics say Correa has moved even faster than Chavez to muzzle the press.

Correa's government has shut down more than a dozen radio stations. TV stations are often forced to broadcast government propaganda. When a Quito magazine published an editorial that Correa didn't like, it was fined $80,000. And in a slander case against El Universo newspaper, a judge awarded President Correa a whopping $40 million.

Meanwhile, the president has instructed his ministers to speak only to state-run outlets, like Radio Ecuador, which belongs to one of South America's most extensive state media operations. Correa often uses this megaphone to savage independent journalists.

In a televised appearance, Correa ripped up a newspaper in front of a delighted audience.

"We must demand that the corrupt media stop trying to trick us," he said. "Under our revolution, you the people are in charge and we will not bow down to these scoundrels."

Correa's campaign has turned many here against the media. Last year, there were 173 acts of aggression against journalists, including more than a dozen physical attacks and threats. That's a 50 percent jump from the year before.

Jose Velasquez, the news manager at the private Teleamazonas TV station, says lawsuits against the media are also on the rise.

"Since the president is so aggressive with the journalists, that empowers a lot of people. People will say: 'Yeah, yeah, yeah, you are corrupt so I am going to sue you too.'"

Velasquez says he's been hit with at least two or three lawsuits per month. Part of the problem, he says, is that Correa is thin-skinned.

In the absence of a strong political opposition, the media appear to have become Correa's whipping boy. So, to avoid the government's wrath many media outlets refrain from publishing hard-hitting stories.

"We are now seeing a movement towards self-censorship," according to Eric Samson, who works for the press freedom group Reporters Without Borders. He says even mundane subjects are sometimes off limits.

"Weeks ago this channel chose not to talk about bulls, because bullfighting was prohibited. And they said: 'We don't want any problem with the government. They are against bullfighting, so we are not going to talk about that.'"

Even at El Comercio, Ecuador's most influential newspaper, journalists have grown gun shy.

"Due to the fear of lawsuits," said reporter Santiago Zeas, "every word that goes into the paper comes under extra scrutiny."

And that, he says, has produced the only upside to Correa's war against the press: It has forced Ecuadorian journalists to become more thorough and accurate.